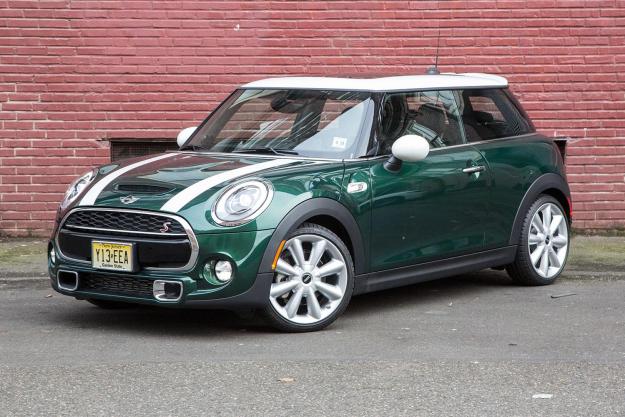 “As a grin inducing, gasoline rocket, MINI’s 2015 Cooper S Hardtop is a knockout. As a well-priced and comfortable mode of transportation, however, it’s hugely flawed.”

MINI is quite good at turning gasoline into forward momentum. Of all the things the new, bigger MINI struggles with, and believe me there are many, flinging itself forward is not one of them.

Stomp the skinny pedal of the Cooper S and it rushes forward with an eagerness, immediacy, and intensity few might expect from such a twee coupe – especially one that looks more carp than car. In this way, as a veritable giggle-factory, it is quite enjoyable.

This is the trouble with the MINI Cooper S Hardtop. It is good fun, but as a reasonable, well-valued mode of transport, it falls flat. Let me explain.

Straight away, let me say that, while a buyer might be able to purchase a baseline MINI Cooper S Hardtop for some $23,600, my press demonstrator was a rather loaded unit, clocking in at $37,395. For this relative hefty chunk of change, I got many optional packages, including Cold Weather, Sport, Premium, and one strangely called “Fully Loaded.”

Though a little car, as the price and option list might indicate, MINI didn’t give it the small car interior treatment. Plopping down into the cabin, the driver is struck by the incredible build quality. The materials are of the highest grade, the parts all fit together very nicely, and the design is understandably top-notch. Turn up the Harman/Kardon sound system and that point is only emphasized.

In most non-super-luxury cars fitted with premium audio, the experience is diminished by rattle-y cabin components. A system can have perfect treble and bass, but, when door panels and dash trim bits hit a sympathetic — and audible – vibration, the sound scape is ruined.

In the MINI Cooper S Hardtop, though, the sound was not encumbered by build quality, but rather accented and assisted by it, as the bijou cabin was as taut as a drum. I cranked everything from Master P (don’t judge) to Paul Simon in the Cooper S and the auditory experience was one of the best I’ve enjoyed beneath the $100,000 mark.

Plopping down into the cabin, the driver is struck by the incredible build quality.

Thankfully, the dash parts weren’t the only solid components of the interior. The navigation, called MINI Navigation XL (a variant of BMW’s iDrive), was exceptionally nice to use and to behold. Graphics are excellent, and its many menus are intuitive and easy to navigate.

One issue I did encounter, though, was the system’s willingness — or lack there of — to interact with my iPhone 6’s Spotify app, which I found exceedingly strange, as BMW has made an effort to brag about its Spotify compatibility. In short, I couldn’t get it to interact with Spotify. It’d play the songs, but not much else, which was hugely irritating. Since that was such a small portion of an otherwise wholly enjoyable tech experience, though, I’ll let it slide.

I also rather enjoyed the HUD, which, instead of being projected onto the windshield, was contained in a little pop-up screen that jutted out of the dash. While it felt a bit gimmicky, it did make keeping my eyes on the road easier while still monitoring speed and nav directions.

The tautness of the interior extends down to the drivetrain as well, which completes the hard and fast MINI experience.

In my demonstrator, the optional, smooth but sharp six-speed automatic was paired to the standard 2.0-liter gasoline four-cylinder, which produces 189 horsepower and 207 pound-feet of torque. All told, it’ll do 0 to 60 in 6.4 seconds and a top speed of 146 mph. From the seat of my pants, however, it felt much, much quicker

I often drive high-performance sports and super cars, and even I found the straight-line quickness of the Cooper S Hardtop surprising and honestly addicting. It didn’t feel as though the power had to go from a gasoline-fueled explosion through a crankshaft, out to a transmission, through some axles, and down to the road. Instead, it felt like the gas was somehow rocketing the car forward, unencumbered by the mechanical process – it felt much more organic.

Cornering, too, was great fun, thanks to the heavy steering and incredibly quick steering ratio. Granted, MINI still hasn’t sorted its torque-steer issue, and drivers will likely find steering wheel inputs overpowered by torque. Ignoring that, though, the Cooper S handled with cheeky aplomb. During spirited driving, it felt downright alive, wriggling and bucking as it slalomed through hairpin corners and switchbacks.

These are the ways in which the MINI Cooper S Hardtop is a knockout. It’s a taut, fast, and fashionable little coupe with a penchant for performance. Sadly, though, for nearly $40,000, it sure as hell ought to do a lot more than tickle my eardrums and plaster a grin on my face in on a high-spirited motoring session. Sadly, it doesn’t.

After my immediate infatuation with the MINI’s charms wore off, I was left with the stark reality of the flaws in the British racing coupe around me. For starters, the suspension is unjustifiably stiff, which is sadly accentuated by the run-flat tires. I’m still relatively young and likely well below the buyer bracket for this car. I suspect that the middle-age real estate agents actually buying this car will find it unforgivingly rigid. I mean, unless they want to have their fillings kicked out and their vertebrae fused.

Then there’s the driving position. I’m six-foot-five-inches tall and had more than enough headroom in the cathedral-like cabin. But the driving position, though, shatters road visibility. For comparison, I got into the new Volkswagen Golf directly from the MINI and couldn’t believe how much more of the road I could see from the VW. If that weren’t bad enough, with the seat adjusted back to fit my under the dash, I was practically sitting in the back seat.

Because of the driving position, though, road visibility is nullified.

Sitting there, I was wondering what the hell the MINI engineers had done with all the space. The car is 5.1 inches longer than the last, but has the outward visibility and usable interior space of a Lotus Elise.

Efficiency was an issue, too. The EPA has estimated the Cooper S Hardtop to achieve 27 mpg city, 38 highway, with a combined score of 31 mpg. Admittedly, those are very good scores. However, just like the SAT scores George Costanza of Seinfeld claimed, they’re not based in reality. During my time with it, the MINI averaged 18 mpg. Granted, I was heavy on the throttle in the city, but that’s still quite the discrepancy.

As a car enthusiast, I am whole-heartedly in favor of cars that exist simply for fun – the aforementioned Lotus is a perfect example. The MINI Cooper S Hardtop, I’m afraid, just isn’t one of those. I know that essentially no one is going to buy the Cooper S as his or her Sunday driver. Instead, most buyers will be drawn to the brand’s distinctive cuteness and the statement to the outside world that design makes.

If you want to look fashion-forward, wacky, fun, and decidedly European, there are far better options on the market for far less cash. If you want a car that’s a stink in a straight line and can fit in your palm, the Fiat 500 Abarth is excellent. If you want a smart, well-built hatch with Continental flare, might I direct you toward the Volkswagen Golf GTI. Or if you simply want to have a larf, there’s always the Ford Fiesta ST, which is, after all, a European-designed car, and has a much more useful interior despite being smaller in most dimensions.

When it comes down to it, if you have to get a MINI Cooper Hardtop, get the non-S with the three-cylinder and then don’t add much stuff to it, aside from the inexcusably priced, $4,500 “Fully Loaded” pack. In the modern world, that beautiful nav really is the only add-on you’ll miss.