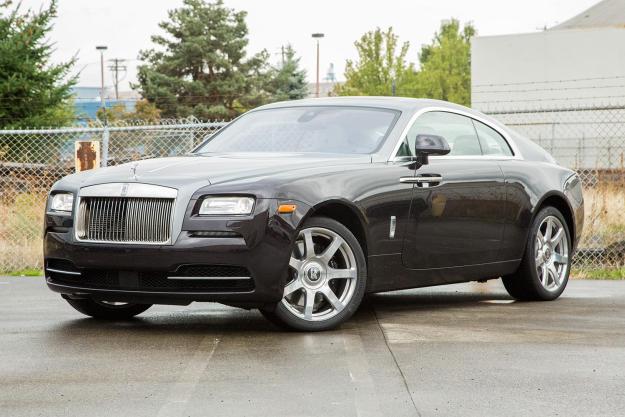 “The Wraith isn’t the best-driving car in the world, but driving it will make you feel the best in the world.”

When I started writing about cars several years ago, there were four brands that I held on high, ones I saw as the pinnacle of the industry: Bentley, Ferrari, Lamborghini, and Rolls-Royce.

It was the far off — albeit unrealistic — dream of driving these cars that kept me slogging through reviews of the Mitsubishi Mirages of the world. They were the carrot on the end of the stick that kept me trudging along.

Amazingly, I eventually worked my way up to these god-like vehicles, first Bentley, then Ferrari, then Lamborghini. Finally, I reached the final holdout: Rolls-Royce.

To my amazement, I found Rolls-Royces drove exactly how I imagined they would: perfectly.

To my amazement, I found Rolls-Royces drove exactly how I imagined they would: perfectly. They offer force-of-nature power, yacht-like handling, and exquisite craftsmanship, which can be both observed and felt.

And although the Wraith is the “sports car” of the Rolls range, it still drives a lot like its larger cousin, the Ghost II. Yes, the Wraith might be a suicide-doored coupe, but it still drove like a seafaring yacht, albeit one with 624 horsepower.

Despite its driving dynamics falling into my preconceived notions, I was in no way disappointed with the Wraith. Because – as with customers who buy the Wraith – it stands as a culmination of a lifetime of work. Even though a pedestrian, a random passerby, could accurately predict the sensation of driving a Rolls, it’s still a wondrous thing. Because it’s not how it drives exactly; it’s about how it makes a driver feel.

If the Rolls-Royce men are to be believed, the Wraith is supposed to be the kind of car that well-heeled buyers can acquire when they can’t decide between a Rolls-Royce Ghost Series II and a Ferrari. In terms of looks, they’re dead on; the V12-powered coupe looks the part with suicide doors and a fastback rear-end.

Drop behind the wheel, fire the engine, and start rolling, and that sense quickly fades. Despite what Rolls likes to think, and its twin-turbo V12 engine, the Wraith is no replacement for a Ferrari.

Honestly, it shouldn’t be. I reckon, if an eight-year-old can’t imagine driving a Roller just by staring at the poster on his wall, the British brand has failed us all. So branding the Wraith a sports car is a bit of a misnomer. It’s simply a slightly edgier Roller.

When it comes down to it, this Roller is the first in a long time that is designed to drive, rather than be driven in. It, then, is more of a cruiser coupe. It’s the kind of car the members of the ‘Pharos’ gang in American Graffiti would have driven, if they were heirs to a Saudi oil fortune.

I could tell you about the many bulls that graciously gave their lives to cover the Wraith interior, the vibrant head-up display (HUD), or the Spirit of Ecstasy infotainment system, which is a derivation of the BMW iDrive system. These are niggling details that likely won’t excite.

Something about the large, gorgeous Canadel panels just make me want to rub my face against them.

Let me instead jump to the two outstanding interior appointments of the Wraith that — like the brand before it — make me warm with delight: the Canadel paneling and the Starlight Headliner.

We’ll start with the more obvious of the two: the Canadel paneling. Open the door and occupants are greeted with the new open-grain wood paneling, which encompasses the majority of the inner door panel. Finished in a light satin finish, the open-grain wood is angled at 55 degrees, which improves the visual flow of the interior.

The panels are like nothing else in the industry and – in my opinion – are alone nearly worth the entire $284,900 of the base price. Something about the large, gorgeous Canadel panels just make me want to rub my face against them. And, no, I can’t explain why.

If, for some reason, occupants are unimpressed Canadel panels, they needn’t wait longer than after sunset to experience the Wraith’s next trick: its Starlight Headliner.

Composed of 1,340 individual fiber optic lights, which are hand-woven into the leather roof lining, the Starlight Headliner is a bespoke option designed to mimic the starry night sky above the heads of the occupants. If you have to be so gauche as to ask, this stunning light show will set buyers back $12,925.

I’ve said the Wraith drove exactly how I expected it to. Perhaps I should explain that a bit with a few mechanical details of the car.

First off, it’s powered by a BMW-derived 6.6-liter twin-turbo V12 that produces 624 horsepower mated to an eight-speed Satellite Aided Transmission (SAT) that chooses gears based upon information gathered from the navigation system and routes power to the rear wheels. This combo is good for a 0-to-60 run of 4.4 seconds and an electronically limited top speed of 155 mph.

Its interior is the finest in the world. It handles like a yacht. And it accelerates not with anger but with aplomb.

One might expect that, with 624 ponies, the Wraith’s acceleration is neck wrenching and immediate. It is … and it isn’t. Yes, it gets to 60 very quickly indeed. But it – oddly – doesn’t feel as fast as it is. That’s because Rolls designers had effortlessness in mind, when tuning the car.

That translates into a wafting feeling, no matter the speed or the throttle position. The Wraith would never dare try to rip the driver’s head off. Instead, it will gently – but forcefully – guide him to 60 and beyond.

Handling is more what you would expect. Before I began this review, I turned to the fellow who sits next to me at Digital Trends, Ryan Waniata. Ryan reviews sound systems mostly. He’s never driven a Rolls-Royce, but has a keen mind for quality and how things should be.

I asked him how he imagined a Rolls might drive. He paused for a moment, looked down, furrowed his brow and took a breath. He looked back up at me and said, “like a boat.” Granted, this is an oversimplification of the sensation, but he hit the nail pretty well on the head.

The Wraith is sportier than the Ghost II, but not as sporty as a Bentley GT Speed. So it doesn’t handle very flatly, during hard cornering. This is due to the fact that Rolls-Royce has fitted to the fastback coupe perhaps the greatest suspension in the history of not only cars, but all moving things.

The air suspension might not keep the big body flat in the corners, but it sucks up bumps and roadway imperfections like a floating magic carpet. And, no, I am not making a lame reference there; that’s actually how Rolls-Royce itself refers to the ride quality.

It’s taken me some time between having driven the Wraith and my review of it. That’s because it flummoxed me a bit with its predictability. Its interior is the finest in the world. It handles like a yacht. And it accelerates not with anger but with aplomb.

This left me for quite some time not knowing what to say about the Wraith. It was that realization that leads me to the conclusion: That’s exactly what I should say.

The Wraith I tested clocked in around $390,000. The kind of man who can afford the Wraith has worked very hard to do so. Accordingly, he’ll want to show the world just how well he’s done. To that end, there is no finer car in the world.

The Rolls-Royce Wraith achieves its goals not by outperforming the competition, but rather by changing the driver’s reality. The Wraith is worth its price tag because of how the driver feels behind the wheel and how people perceive and treat occupants. And it’s those sensations that are priceless.