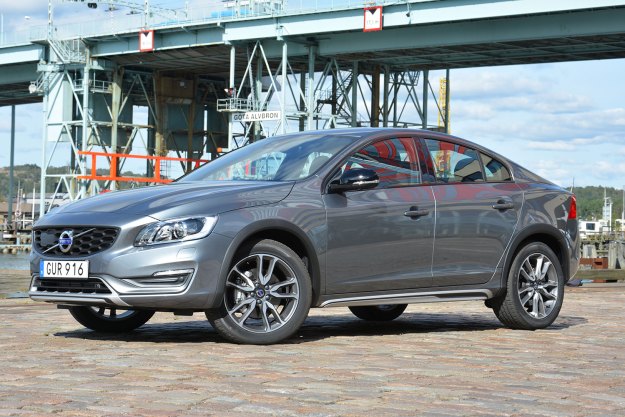 “The S60 Cross Country isn't for everyone, but the few who sign the dotted line will drive home in one of the most unique cars Volvo has ever built.”

Today, the term “niche model” is often used to describe a car that’s unconventional in one way or another. The BMW X6 is the poster child of the segment; it’s neither a crossover nor a coupe so it gets lumped in the niche category. But, it’s difficult to ignore that it remains a relatively volume-focused model; BMW sold over 230,000 examples of the first-gen X6 globally.

One of the only true niche cars available in the United States today is the 2016 Volvo S60 Cross Country. Presented earlier this year at the Detroit Motor Show, the Cross Country accurately illustrates the term “niche model” because it’s in a class of one and its production is limited to just 500 examples.

The Cross Country is essentially a regular S60 that has been crossover-ized. Looking back, the list of cars that follow the same basic recipe as the S60 Cross Country is largely limited to the Subaru Outback sedan and – set your time machine to 1979 – the AMC Eagle. Digging deeper into the pantheon of automotive history reveals that Russia’s Moskvitch also experimented with the idea of a tall, four-wheel drive sedan during the 1950s.

Visually, the Cross Country immediately stands out from the S60 thanks to design cues like a model-specific grille with honeycomb inserts, light gray trim on the bottom of both bumpers, black plastic cladding over the wheel arches, new side skirts as well as 18-inch wheels. The alloys are wrapped by tall-profile all-season Continental tires, the kind more commonly found on crossovers and SUVs.

The tall tires are required because the Cross Country also gains an extra 2.6 inches of ground clearance. Volvo increased the ride height the old-fashioned way: by installing taller suspension components. Simply put, the Cross Country is a S60 fitted with a lift kit. I think the rugged, jacked-up look suits the sedan surprisingly well, but maybe that’s just me.

In the United States, the S60 Cross Country is exclusively available with a time-tested, turbocharged 2.5-liter five-cylinder engine that generates 250 horsepower at 5,400 rpm and 266 pound-feet of torque from 1,800 to 2,400 rpm. Bolted to a six-speed automatic transmission, the straight-five sends the Cross Country from 0 to 60 mph in a brisk 6.7 seconds.

Essentially a sedan that has been crossover-ized, the Volvo S60 Cross Country is a unicorn in the automotive landscape.

I picked up the example tested at Volvo’s headquarters in Gothenburg, Sweden, so I got a Euro-spec model powered by a 2.4-liter straight-five turbodiesel engine that makes 190 hp at 4,000 rpm and a generous 310 lb-ft. of torque from 1,500 to 3,000 rpm. Front-wheel drive cars get a six-speed automatic transmission, but my tester benefited from an eight-speed automatic because it was fitted with the optional all-wheel drive system.

With an oil-burner under the hood, the Cross Country sprints from 0 to 62 mph (100 km/h) in approximately 8.8 seconds, and it goes on to a top speed of 130 mph. Gas mileage checks in at about 40 mpg if you drive with a light right foot.

As you’d expect, the Cross Country is all but identical to the regular S60 on the inside. That means it boasts Volvo’s waterfall center console, which is one of the most elegant and practical designs in the industry. Noticeably tilted towards the driver, the console earns its name because it conceals a generously-sized storage compartment.

Unfortunately, the Cross Country also gets the S60’s infotainment system. Dubbed Sensus in Volvo-speak, the software is built around a recessed seven-inch screen and it’s controlled by a galaxy’s worth of buttons and knobs grouped on a small part of the center console. The setup scores virtually no points for user-friendliness because its learning curve is steeper than the Rocky Mountains. It’s also getting increasingly outdated compared to the systems offered by the competition, notably Mercedes-Benz and BMW. The S60 would benefit immensely from a large touch screen like the one that’s found in the XC90.

The rest of the interior lives up to Volvo’s premium ambitions, the Cross Country feels downright luxurious. The design of the dashboard is refreshingly clean and uncluttered, and the entire cockpit is built with high-quality materials. The instrument cluster is made up of four digital gauges and a thin-film transistor (TFT) screen that can be configured to display a wide variety of data including which driving aids are turned on and trip-specific information.

One of the most surprising aspects of the S60 Cross Country is how pleasantly silent it is, especially at freeway speeds. The cabin is remarkably well isolated so road noise and the deep, low rumble of the diesel engine are both kept out. The quietness is complemented by some of the most comfortable front seats on this side of a Mercedes-Benz S-Class, and by the peace of mind that comes with an intuitive adaptive cruise control system capable of bringing the car to a full stop if the need be. Taller adults will feel cramped sitting in the back seats, however.

The chassis is decidedly geared more towards a predictable and sure-footed handling than an enthusiast-friendly driving style.

The Cross Country sprints off the line thanks to diesel’s low-end torque, and the automatic transmission goes through the gears instantaneously without the slightest thunk. Although the Cross Country performs well around bends, its chassis is decidedly geared more towards a predictable and sure-footed handling than an enthusiast-friendly driving style. Despite its new stance, body roll is kept in check. The difference between the Cross Country and the S60 is almost imperceptible, but both cars share the same numb and overly assisted steering.

The Cross Country is also more comfortable than the S60 – whose ride is rather firm – thanks to the suspension upgrades and the bigger tires. The difference is more pronounced when driving over dirt roads or streets paved with cobblestones. The four-wheel drive system provides an adequate amount of grip on loose surfaces such as gravel, but I wasn’t able to test it on snow or in the rain.

Drivers coming from a crossover or a SUV will find that the Cross Country is easy to maneuver around town because it offers a vantage point that’s higher than that of a regular sedan but it’s not anywhere near as bulky as tall soft-roaders like Volvo’s own XC60. Rear visibility isn’t excellent, but parking sensors on both ends and a rear-view camera partially make up for that.

All-weather floor mats keep the interior clean when the going gets tough.

“What’s it look like up there?” A picture is worth a thousand words.

For the average new car buyer, the segment-bending $43,500 Cross Country isn’t worth the premium it carries over a regular S60 sedan. However, it makes complete sense for folks who live at the far end of a dirt road, or motorists who go off the beaten path on a regular basis. I’m looking at you, biologists.

An oddball in the best possible way, the Cross Country is in a class of its own but it nonetheless faces stiff competition from Volvo’s own V60 Cross Country and from countless premium compact crossovers. While it’s well equipped, it’s also more expensive and less spacious than both the V60 and the XC60, which means it’s aimed at a very small target audience that values a sedan body style above all. Forget the X6, the CLS, and the CC, the S60 Cross Country is the perfect example of what a niche model really is.

Volvo knows what, which is why only 500 examples of the 2016 S60 Cross Country have been earmarked for the United States market. The few that sign the dotted line will drive home in what is unquestionably the most unique Volvo built in recent memory.