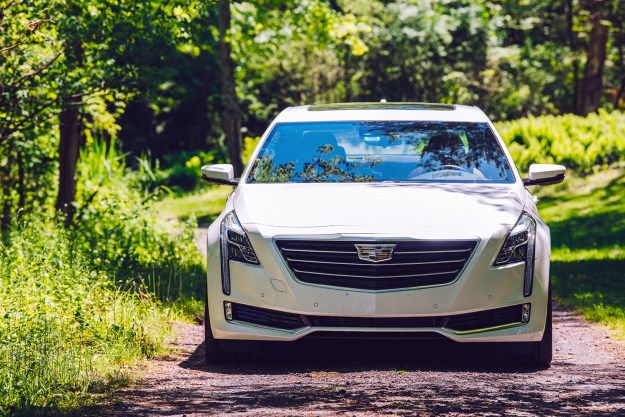 “The extended range of Cadillac’s hybrid CT6 means getting to bask in luxury for longer.”

Cadillac’s range-topping CT6 is a pretty great luxury sedan. Heck, we liked it so much, we even gave it an award. We liked its casual elegance, simplistic luxury, and a package of tech that was neatly integrated; no overwhelming collection of gadgets. This year, the CT6 adds one more hefty trick up its sleeve: hybrid power that doubles its estimated fuel economy. We took a ride up with the luxury hybrid through New York’s Westchester County to see how a little extra electricity complimented the cool Caddy.

The Cadillac CT6 gains an 18.4 kWh battery pack, as well as an electric variable transmission, or EVT. That means the transmission that acts like a normal automatic gearbox when you want it to, like on the highway, but has all the EV components “blended” in to maximize efficiency.

Nestled in the dash is a 10.2-inch touchscreen that runs CUE – the Cadillac user experience. Here, passengers can select from a typical array of apps like navigation, audio functions, climate control, and phone settings. It also has built-in Pandora radio and is equipped with OnStar, allowing drivers to sign up for GM’s service and support network. This subscription also includes 4G LTE connectivity, turning the CT6 into a wireless hotspot.

he 3D-rendered mappin chugged along like a video game trying to run on old hardware.

CUE also has a couple neat tricks like sensing a hand hovering above it, prompting menu options to appear. It also has haptic feedback, so if you touch an app or type into a keypad, you’ll feel a slight vibration in response to your inputs.

Though our trip was a simple drive from Manhattan straight up along the Hudson River to more bucolic scenery, we engaged CUE’s navigation and were keenly made aware just how badly CUE needs an upgrade. The directions themselves were fine, but the 3D-rendered mapping chugged along like a video game trying to run on old hardware. Trying to zoom in or out resulted in extreme views either way, discouraging us from trying to use it further.

A screen in the rearview mirror sows a wide-angle image of what’s behind you — an option on the Chevrolet Bolt that’s standard here. We found the standard reflective mirror felt more natural, since you lose depth perception with the camera’s flat image. Fortunately, you can easily toggle it off.

What did extend our senses, however, were the multitude of sensors surrounding the car that facilitate functions like forward collision alert and lane assist. Depending on the situation (like, say, parking in a narrow spot), the CT6 includes haptic feedback in the seat along with the usual beeps and lights. If you’re coasting out of a lane or getting too close to something as you park, the seat will vibrate on the side that requires your attention. It’s a clever and intuitive way to enhance driver awareness without causing further distraction.

You can count on Cadillac to do interiors really well, and the CT6 plug-in is no exception. Like the standard CT6, you get stained wood trim, hand-sown leather, and just enough chrome accents throughout. Apart from the premium materials, all the other touch points feel like solid rubber instead of hard plastics. Front seats feel snug, but roomy, and the back is classic sedan comfort. An optional rear seat infotainment system adds 10-inch screens to the back of the passenger seats. These allow those in the rear to access radio functions, play DVDs, and mirror the CUE system screen on the front. Oh and remember that OnStar 4G LTE connectivity? If you got that and a device like Google Chromecast, or Apple TV, you’ve just made the back seat a mobile living room.

What does change, however, is that the ample sedan trunk space has been used to accommodate the plug-in’s battery pack, so instead of 15 cubic feet of trunk space, you see a well-packaged battery taking up a third of the space, though it seems like more.

On the way out of the city, the CT6 plug-in makes it apparent that a smooth, luxurious ride is paramount above all else. Like the standard CT6, the plug-in retains excellent sound baffling from the outside and a driving position that encourages a more relaxing driving style, rather than an aggressive one. The EVT transmission does smoothly transition through acceleration, and can deliver power quickly from a stop, but stepping on the gas for overtakes lack immediacy. Again, it’s a luxury car, but it seems to take a beat for the electric blender to drop from efficient coasting to climbing the speedometer.

Caddy’s 2.0-liter turbo four cylinder engine does most of the grunt work, providing 265 horsepower on its own, but 335 hp and 432 pound-feet of torque as long as the battery has juice and the EVT chips in. It pushes all that down through the back wheels. Cadillac states that the hybrid system can provide 440 miles of range and has a city/highway fuel economy rating of 62 MPGe.

The Cadillac CT6 is a fine example of a luxury vehicle with an assortment of well-integrated gadgets that are both helpful and fun to use. Throwing in a hybrid system that lets you cruise in American luxury for longer sounds great to us, though your travel plans might be hindered by the truncated storage space.

Nissan wants the 2023 Ariya to be its comeback EV, but the bar has been raised
We need more 7-passenger EVs, but the 2023 Mercedes EQS SUV has room to improve
Lux and refreshingly livable, Mercedes’ EQE moves EVs mainstream
Tesla to fix window software on 1M of its U.S. cars
Cruise’s robot taxis head to Arizona and Texas
Uber says it’s investigating ‘cybersecurity incident’
Nvidia’s Drive Concierge will fill your car with screens
The Uber hack is an outrageous tale of a teen hacking for fun
How to watch Tesla’s AI Day tonight and what to expect
2023 Audi Q4 E-Tron first drive: the predictable and traditional EV SUV we need
Tesla AI Day 2022: Optimus, self driving cars, and everything else announced
Tesla hopes full self-driving beta will be out globally by the end of 2022
Elon Musk reveals first delivery date and customer for Tesla Semi truck