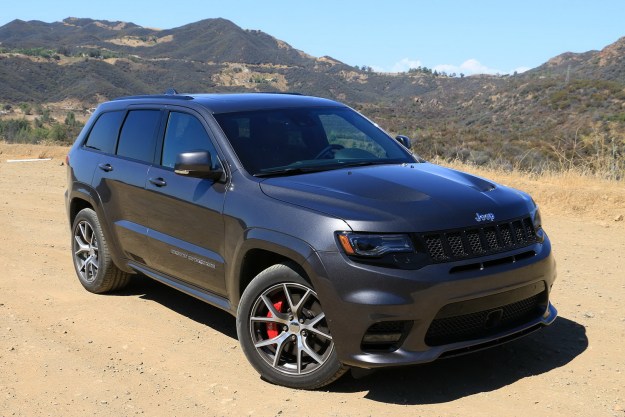 “The Grand Cherokee SRT makes a driver feel like the king of the road at price that massively undercuts the competition.”

The concept of a high-performance SUV should be a contradiction in terms. Yet through exhaustive engineering and sheer strength of will, the automotive industry has created an entire segment of vehicles which fit that description, and nearly all of them are just as at home on the road course as they are in suburbia.

Jeep was among the first out of the gate with a performance-focused version of their mid-sized SUV in 2007. In the years since the segment has grown to include many of Europe’s most respected marques, but the SRT-flavored Grand Cherokee has always served as a bit of an outlier because although it’s one of the priciest vehicles in the FCA portfolio, it’s still tens of thousands of dollars less expensive than models like the BMW X6M and the supercharged Range Rover Sport.

Recent years have seen some important updates made to the Grand Cherokee SRT, and 2017 brings a few more as well. But this year’s updates also serve as foreshadowing for an all-but-official Hellcat iteration of the Grand Cherokee SRT which is expected to debut early next year with a 707 horsepower supercharged 6.2-liter V8 not unlike the motor found in the engine bays of the Dodge Challenger and Charger SRT Hellcats. Is this rumored Grand Cherokee SRT Hellcat worth waiting for, or is the naturally aspirated SRT model we have here already up to snuff? I hit the streets of Los Angeles and the desert highways outside of Palm Springs to find out.

Improving upon the formula

Although this generation of the Grand Cherokee SRT has been around since 2011, Jeep has updated it in meaningful ways in the ensuing years. 2014 saw the old five-speed automatic replaced with the excellent, ZF-derived eight-speed gearbox, now found in just about every vehicle across the FCA lineup that it will fit in. Not only did it improve fuel economy for Jeep’s thirsty high-performance SUV, it also chopped half a second off its 0-60 mph sprint and made the SUV substantially more engaging to drive in the process.

The following year saw Jeep recalibrate the 6.4-liter Hemi’s engine management software, resulting in a small bump in power to 475 hp and 470 pound-feet of torque, while an active noise cancelation system helped broaden the use of the Hemi’s fuel-saving cylinder deactivation feature during low-load driving.

Last year brought a revised configuration for the dash display, moving the tachometer front and center, while Selec-Track driving modes were expanded to include a custom setting that allows drivers to pick and choose the various mode parameters like throttle response and suspension stiffness to their liking rather than using a preset. 2017 sees a new, more aggressive looking front fascia to the SRT model added to the mix, highlighted by three additional air intakes positioned just above the bumper, along with a new leather interior package.

While none of these updates have wholly reinvented the Grand Cherokee SRT along the way, each has helped prevent this fast SUV from getting stale, resulting in a vehicle that still feels fresh seven years on.

While there are a host of vehicles that offer more horsepower than the Grand Cherokee SRT, few pull off the “king of the road” vibe as convincingly. With no turbochargers to wait on, the Grand Cherokee’s throttle response is essentially instantaneous and feels especially authoritative due to the muscle car growl of the 6.4-liter V8 under the hood.

Few pull off the “king of the road” vibe as convincingly as the Grand Cherokee SRT.

Paired with the paddle shifted eight-speed automatic and supplemented by adaptive dampers and big six-piston Brembo brakes, the Grand Cherokee dispatches asphalt more like a war machine than a family hauler. And yet its brakes aren’t grabby at the top of the pedal, its suspension relaxes when asked to do so, and cabin isolation is near-absolute during long stints on the highway, even when the Hemi’s often-bemoaned cylinder deactivation system kicks in.

It’s that convincing split personality which really allows the Grand Cherokee SRT shine. Vehicles like the Range Rover Sport offer opulent luxury and straight line urgency, but can feel top heavy and wayward when they get their weight thrown around. By contrast, the Jeep feels planted and confident when asked to perform, eager to cut a swath through slow-moving traffic and then settle back into a relaxed grand touring routine when you’re ready.

The interior is a nice place to do the business of driving too, with 8-way leather sport buckets that are both comfortable and well-bolstered, while the Uconnect system and its 8.4-inch touchscreen display continue to impress with responsive hardware and comprehensive suite of features. The SRT Performance pages included here offer all manner of performance-related information, allowing you to check out telemetry data in real-time and fine-tune performance functions to your preference.

You’d be right to be skeptical of a high-riding, 5000 pound SUV that claims to offer a high performance experience. But the Grand Cherokee SRT simply defies conventional wisdom, offering legitimately quick straight-line acceleration with responsive handling and superb stopping power when optioned with the six-piston Brembo brake package.

And yet Jeep has also managed to keep the interior as luxurious as it is purposeful, and a host of standard driver assistance features like blind spot monitoring, lane departure warning, emergency braking assistance and a rear back-up camera make piloting this brute through tight urban streets an effortless endeavor.

Some of its European rivals offer greater performance, more luxury, or both, but none of them come anywhere near matching the Grand Cherokee’s price tag for this level of performance and features.

The Porsche Cayenne, BMW X6M, Range Rover Sport Supercharged and Mercedes-AMG GLE63 all play in the same space as the Jeep Grand Cherokee SRT but none are within $30,000 of the Jeep’s bottom line, while a few cost more than double the asking price of the Grand Cherokee.

While the SRT iteration of the Grand Cherokee was never intended to be a volume seller, it’s safe to assume this model isn’t being put out to pasture any time soon, and it’s no secret that development of the platform is ongoing.

In terms of the 2017 Grand Cherokee SRT’s future proofing, while it doesn’t include the latest version of FCA’s Uconnect system – which debuts on the 2017 Dodge Challenger and Charger this fall – the infotainment system’s feature set is fairly comprehensive. Its lack of the Apple CarPlay and Android Auto compatibility is perhaps the most obvious disadvantage versus the upcoming version of Uconnect.

How much performance do you need out of your SUV, how much do you have to spend, and how patient are you? While this Jeep is no slouch in the performance department, SUVs like the Porsche Cayenne Turbo S will undoubtedly outperform it, albeit at more than twice the cost.

But then there’s also the long-rumored Grand Cherokee SRT Hellcat (or Trackhawk, or whatever Jeep chooses to call it). We’ll likely see it officially debut in January at the 2017 North American Auto Show, with production starting next summer.

For those that don’t want to wait, this naturally aspirated model offers a ton of performance and no shortage of luxury for the price. But those willing to be patient could be first in line for what may end up being the fastest production SUV ever built.