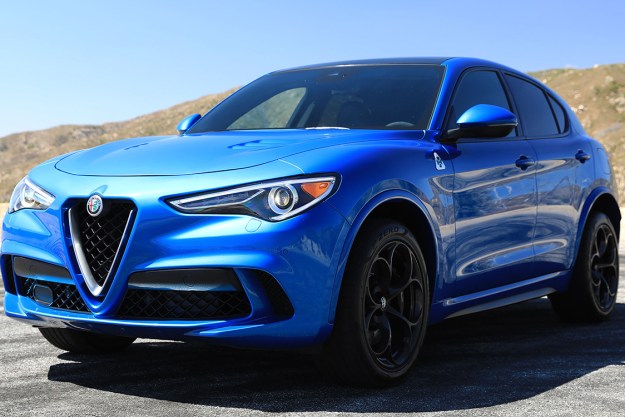 “With the Stelvio Quadrifoglio, Alfa delivers on its Italian high-performance SUV promise – and all that comes with it.”

Last year, Alfa Romeo made headlines when the Stelvio Quadrifoglio captured the production SUV lap record at Germany’s famed Nurburgring, a 12.9-mile crucible of a race track that has become the standard by which high-performance automobiles are judged. That alone was enough to raise an eyebrow or two, even in the salad days of cheap, readily-available horsepower.

But before we’d get a chance to hop behind the wheel of Alfa’s world-beater SUV, its mainstream counterpart, the Stelvio Ti, made landfall in America. We appreciated its sense of style and practically but the Ti left us wanting more, both in terms of luxury and dynamic prowess.

Fortunately, the Quadrifoglio looks to address those issues with the help of a sport-tuned active suspension system, grippy Pirelli rubber, and a Ferrari-derived 2.9-liter V6 engine twin-turbocharged to make 505 horsepower. It is, in many ways, an all-wheel drive, high-riding iteration of Alfa Romeo’s Giulia Quadrifoglio, which we’re already a fan of.

The Quadrifoglio has the hardware to back up the claims made by its aesthetic.

Still, as a five-door sport utility, the Stelvio’s purpose differs from that of the Giulia sports sedan, and as consumer preferences continue to shift toward crossovers, the Italian automaker hopes to strike while the iron is hot. Starting at $79,795 and ringing up $84,290 as-tested (with destination charge), the Stelvio Quadrifoglio’s key rivals are European performance-tuned SUVs like the Porsche Macan and the Mercedes-AMG GLC63 S, as well as Jeep’s own Hellcat-powered Grand Cherokee Trackhawk.

Does the Stelvio Quadrifoglio have what it takes to gain a foothold in this highly competitive segment? We grabbed the keys to this Misano blue example and hit the road to find out.

The driver focus of the Stelvio Quadrifoglio is made clear the instant you lay eyes on the cabin. From the Alcantara and carbon fiber-trimmed steering wheel – complete with a bright red, racing-inspired ignition button – to the aggressively bolstered front buckets, the Quadrifoglio’s high-performance intentions are made obvious. And while the Ti model is more about theater than substance, the Quadrifoglio has the hardware to back the claims made by its aesthetic. Although the general layout doesn’t stray far from the Ti, the Quadrifoglio’s interior feels less spartan in general, as the carbon fiber trim does a better job of elegantly filling in the blank spaces than the wood in our Ti tester did.

As with the four-cylinder model, the Stelvio Quadrifoglio features a center console-mounted drive mode selection knob. Dubbed DNA, an acronym for its dynamic, natural, and advanced efficiency modes, each setting adjusts the throttle response, shift behavior from the transmission, steering weight, and other performance variables. Clicking up to the dynamic setting also adjusts the stiffness of the active suspension system while loosening the reigns of the traction and stability control systems. But for maximum performance, the Quadrifoglio also features a model-exclusive race mode, which not only disables those driver aids completely but opens the exhaust values as wide as they’ll go for maximum sonic effect.

While having the ability to switch between these settings on the fly is undoubtedly convenient, Alfa’s implementation of the system is a bit clunky. For instance, you can’t have the relaxed throttle response of the natural mode with the tighter handling that’s provided by the active suspension’s stiffer settings because the dampers can only be adjusted when the vehicle is set to dynamic or race mode. And if you want the exhaust to play the twin-turbo V6’s soundtrack at full song, you’ll have to have the DNA selector set to race mode because that exhaust setting isn’t accessible by any other means.

If you want the exhaust to play the twin-turbo V6’s soundtrack at full song, you’ll have to have the DNA selector set to race mode.

The gripes we had with Alfa’s proprietary infotainment system in the Ti are also on hand in the Quadrifoglio, like the curiously small back-up camera display, the low-rent feel of the rotary knob, and the hard buttons that are used to navigate its menus. The good news is that the 8.8-inch screen looks pretty sharp and the system supports Apple CarPlay and Android Auto, the latter of which is a welcome upgrade that was still forthcoming when we drove the Ti.

The Stelvio seats five comfortably, particularly up front where the occupants are coddled by those well-bolstered sport seats, but rear passenger headroom does take a slight hit due to the Stelvio’s sloping roofline. The rear seats offer a 60/40 split and fold down flat for 56.5 cubic feet of cargo space. A power liftgate is standard, as is an additional storage area under the cargo floor.

While the looks are compelling and tech is middling, the Stelvio Quadrifoglio’s performance make it a true standout, even within the growing realm of highly capable performance SUVs. Alfa Romeo’s official 0-60 mph time is stated as 3.6 seconds, but behind the wheel it feels even quicker than that. We’d wager this thing would give a Trackhawk a run for its money at the stoplight drags despite the 202-horsepower deficit.

Alfa fans will note that sprint is also several tenths quicker than the Giulia Quadrifoglio even though the Stelvio Quadrifoglio gets a 500-pound weight penalty. That’s because the Stelvio sends the power to all four corners while the Giulia’s grunt is routed exclusively to the rear wheels. The Stelvio simply puts the power down more effectively. Considering how the 2.9-liter V6 makes its thrust, that’s greatly appreciated: Mash the throttle from a standstill without launch control and, like in the Giulia, you’ll notice that not a whole happens until the revs start to build. But once they do, the turbochargers spring to life and catapult the Stelvio forward with a level of urgency that seems almost absurd for a sport-utility vehicle.

Fortunately, this 4,300-pound SUV is also equipped with beefy Brembo brakes all around – six-point calipers up front, four-piston units in the rear. There’s no denying these stoppers are up to the task of repeatedly slowing down the Stelvio from track pace with zero drama, but they lose a point or two due to Alfa’s brake-by-wire system, which causes the brake pedal to be overly sensitive in everyday driving. Carbon ceramic brake discs are also available as an $8,000 option, but we’d really only recommend them to dedicated track rats who plan to do extended lapping sessions on a regular basis.

While the Stelvio Quadrifoglio’s sport-tuned suspension communicates more road imperfections into the cabin than a typical luxury SUV, it pays dividends when the road gets curvy. With the suspension keyed up to its stiffest setting, the Stelvio corners flat despite its mass and ride height while the Pirelli Pzero summer tires – a staggered set with 255mm-wide rubber up front and 285mm tread in the rear – offer commendable grip and faithfully communicate the limits as you approach them. The upshot is that the Quadrifoglio behaves more like a lifted sports car than a lumbering luxury sport-utility with a powerful engine. While that comes at a small knock to everyday comfort, the capability on hand more than makes up for it.

Alfa Romeo doesn’t offer a wide range of options for the Stelvio Quadrifoglio, but that’s partially because this model comes with most of features available on the Stelvio as standard.

Our tester’s Misano blue came at a $600 premium and looks fantastic in this shade, so we’d consider it money well spent. The optional $400 carbon fiber steering wheel feels great in hand and brings an added level of sportiness to the drive, so we’d opt for that as well.

If you’re looking for a stylish high-performance SUV, the Stelvio Quadrifoglio does indeed offer a lot of bang for the buck. Its distinctive styling sets it apart from the usual suspects in the segment, while the performance on tap is flat-out world class.

Jeep’s Grand Cherokee Trackhawk will still come out ahead in a straight-line shootout, but only just barely. And while the Porsche Macan has the edge in terms of luxury amenities and overall build quality, it lacks the extroverted character of the Stelvio Quadrifoglio. Mercedes-AMG’s GLC63 S is another viable option, and should be on the radar of anyone looking for a compact European high-performance sport utility packing V8 power. The BMW X4 M will also likely be offered at a similar price point to the Alfa and deliver comparable performance, but until it makes landfall in the US – likely at some point next year – it’s still anyone’s guess.

At the end of the day there’s only one Italian playing in this segment, and this is it. Though it might lack some of the refinement of its German rivals, and the outright fury of the supercharged Jeep, the Stelvio Quadrifoglio makes up for it with distinctive style and outright capability. Whether that’s enough to convince a potential buyer to stray away from the usual suspects ultimately depends on how one prioritizes those characteristics.

Updated on September 24th, 2018: Android Auto and Apple CarPlay are included in the Stelvio’s price.