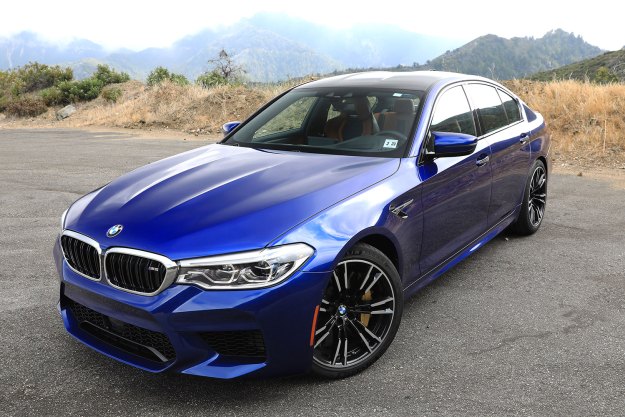 “Despite enthusiasts’ near-comical lust for more, BMW has managed to exceed expectations”

Back in the early 80s, BMW engineers transplanted a six-cylinder engine from the company’s M1 sports car into the chassis of its 5-Series sedan, and history was made. The E28 M5 was born, and it became the fastest production sedan of its time.

In the years following, BMW upped the ante with each new M5, adding more power, more grip, and more features along the way. Many purists would argue that BMW hit the sweet spot with the debut of the E39 M5 in 1998, a sports sedan that blended performance, style, luxury, and driver engagement in equal measure.

Although the M5 continued to get faster and more feature-laden with each subsequent entry, it seemed like the marching orders for BMW’s M Division engineers changed along the way. Balance and driving dynamics began to take a back seat to straight-line capability, creature comforts, and overall girth. The trend culminated with the debut of F10 M5 in 2011.

But BMW doesn’t go backwards. The latest M5 packs more horsepower and technology than ever before, making it the quickest M5 that BMW has ever produced. And after spending a week with BMW’s latest top-spec sports sedan, it’s clear that this headline-grabbing performance statistic is just a footnote in a larger story.

Under the hood is an updated version of the 4.4-liter, twin turbocharged V8 used in the last M5 that now makes a healthy 600 horsepower and 553 pound-feet of torque, the latter of which comes in at 1,800 RPM and stays flat all the way to 5600 RPM.

While the powerplant’s new turbos, revised exhaust manifolds and upgraded oiling system are noteworthy tweaks, the big news is really found in the rest of the drivetrain, where a traditional eight-speed automatic has replaced the seven-speed dual-clutch gearbox used in the previous iteration of the M5. Whereas that car sent all the power to the rear wheels, the latest M5 is equipped with an all-wheel drive system for the first time in the model’s history.

The latest M5 packs more horsepower and technology than ever before.

Would-be drifters fear not, though: BMW’s xDrive system is not only rear biased, the front differential can actually be disengaged entirely, effectively making the car rear-wheel drive if the urge to hoon proves too strong to ignore.

And as you’d expect, the latest M5 also benefits from an array of other performance upgrades, like a specially-tuned three-mode adaptive suspension system, larger brakes, and an active differential, while comfort and convenience features like 20-way adjustable front seats, Harman Kardon audio, and a 10.2-inch touchscreen infotainment system are also part of the deal.

As with the rest of the current 5-Series lineup, the cabin of the M5 is a great place to do the business of driving. While the overall aesthetic will feel largely familiar to anyone who’s sat in a new BMW in the last few years, material quality, fitment, and presentation are among the best in the segment. The array of switchgear on the console, center stack and steering wheel can feel initially overwhelming, but most of the layout is fairly intuitive and clean looking.

Subtle touches – like the logos on the seats that illuminate when the vehicle is unlocked – help to make the M5 feel special, and the optional Aragon Brown Full Merino leather package equipped on our tester paired strikingly well with its Marina Bay Blue paintwork.

Although the M5 comes packing a lot of equipment as-standard, it probably comes as no surprise that some of the best stuff is only attainable through the options sheet. The $4,000 Executive Package equipped to our tester included features like heated, ventilated, and massaging front seats, wireless charging, and an array of cameras that provide a 360-degree view around the car while parking, while performance hardware like carbon ceramic brakes and unique 20-inch alloys also require extra coin. Hell, even Apple CarPlay compatibility will run you an extra $300. But if you’re in the market for six-figure sports sedan, that’s probably of little concern.

It will sprint to 60 miles per hour in a Viper-smoking 3.2 seconds.

BMW’s iDrive 6 software manages the infotainment proceedings. With the option to use either the hard buttons and rotary knob on the center console, or the display’s touchscreen to navigate through the menus, iDrive has never been easier to use. Redundant inputs do produce a rather busy control center, but having the option to simply touch the screen to navigate through the menus when needed or use the rotary dial to control the system without taking your eyes off the road is refreshing.

Accessing the various performance parameters available on the M5 has also been improved by the addition of two new M buttons on the steering wheel. Situated just in front of the shift paddles, each triggers a user-defined preset for the suspension stiffness, steering weight, and powertrain behavior. You can instantly switch, for example, from your favorite comfortable cruising preset, to your preferred sport settings, without even taking a hand off the steering wheel. It’s a feature we used often.

With all four corners putting the power to the pavement, the latest M5’s straight-line pull is stunning. BMW’s estimates this mid-sized sedan will sprint to 60 miles per hour from rest in a Viper-smoking 3.2 seconds, but to honest, it feels even faster than that. This sedan has the potential to embarrass some very exotic hardware at the stop-light drags, and with a well-sorted all-wheel drive system managing the power, fast launches are ostensibly foolproof.

But the M5 has never lacked for power, and the formula for great performance sedan entails more than just sheer thrust. To that end, it’s refreshing to discover that the M Division has not phoned in the crucial sports sedan elements of driving dynamics and everyday usability this time around.

Some might see the switch to a traditional automatic transmission from the dual-clutch transmission (DCT) used in the previous generation model as a softening of the M5, but in truth it’s all the better for it. Not only are the M5’s manners substantially improved around town and in traffic, the shifts delivered by this ZF 8-speed are so quick that we’d wager that very few drivers will miss the DCT when the M5 is driven in anger, regardless of whether the gearbox is shifted manually through the paddles or left to its own devices.

Though the M5 is not exactly a featherweight, at 4,100 pounds it’s roughly 300 pounds lighter than its predecessor thanks to the use of lightweight components, like the carbon-fiber roof. Paired up with a well-tuned adjustable suspension, the M5 is a notably more agreeable dance partner than the car it replaces, though some may find the ride quality to be a bit stiff even in its softest setting. Our tester was also equipped with the optional carbon-ceramic brake package ($8,500), which provided consistent and ample braking during extended stints in the twisties while remaining quiet around town.

It’s clear that BMW took the feedback from the F10 M5 to heart, as the new M5 addresses just about every issue we had with it. It’s a good thing, too, because rivals like the E63 S from Mercedes-AMG are packing more luxury and performance capability than they ever have before.

The latest M5 makes no attempt to recapture the essence of the E39, and quite frankly, we’re perfectly OK with that. This is a different car for a different world with different expectations. And despite enthusiasts’ near-comical lust for more, BMW has managed to exceed those expectations with new M5 while rediscovering a sense of balance. It’s a brave new world, folks.