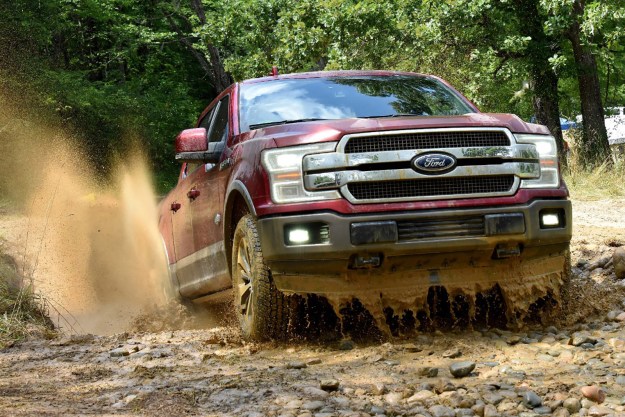 “The 2018 Ford F-150 diesel answers the calls of many customers with fuel efficiency and versatility.”

In the world of pickup trucks, diesel power is perceived as a bit of holy grail. The gobs of torque and robustness make it a workhorse’s best friend for heavy-duty demands such as towing, hauling, and even off-roading. Recently, however, American consumers began realizing what the rest of the world outside the U.S. has known for many decades — that there’s another huge upside to diesel power: fuel efficiency.

The trouble is that one had to make a significant leap to the heavy-duty line of pickups from the Big Three American automakers just to get diesel power. In the case of the Ford F-150, America’s best-selling vehicle for 35 years straight, and the best-selling truck for 40 years, that meant paying a nice premium and taking a giant leap to Ford’s Super Duty lineup. For most pickup buyers, that’s just a little too much extra truck and a tall order. Not anymore.

For 2018, a few revisions were applied to the F-150’s general interior, mainly to the interior color option palette, and updates to the choice of materials. Otherwise, stepping up and into the various Lariat, King Range, and Platinum versions of the F-150 diesel that Ford had available during testing will definitely make fans feel right at home, as majority of it remains unchanged. And since the current 13th generation of F-150 is just a few years old, it’s as modern and bang-up-to-date as any other pickup in its class.

It’s as modern and bang-up-to-date as any other pickup in its class.

There’s plenty of extra storage space for tools and personal belongings, enough cup holders for the Big Gulps of all the occupants, and lots of overall interior space. Despite needing to opt for at least the third-tier Lariat trim over the base XL and second-tier XLT just to get the new diesel engine, the cheapest F-150 diesel comes relatively modestly equipped. Such includes dual-zone automatic climate control, Ford’s 8-inch Sync 3 infotainment system with SiriusXM radio and various connectivity features, special gauges for oil pressure and transmission temperature, MyKey intelligent key access, an auto-dimming rear-view mirror, and a rear-view camera with Dynamic Hitch Assist for trailering.

Aside from the new Power Stroke turbocharged diesel V6, because the 2018 Ford F-150 remains largely unchanged, so does its driving experience as an incredibly easy, maneuverable, and comfortable truck. With the diesel V6 equipped, however, one will immediately acknowledge how surprisingly quiet and smooth the new oil-burning mill is, especially for a compression-ignition motor. Originally designed by Ford for Land Rover’s Range Rover TDV6 — remnant of when Ford Motor Company used to own Jaguar-Land Rover — engineers in Dearborn modified it to fit the F-150’s application with other various tweaks. Specifically, Ford went above and beyond in the refinement department to make sure that you couldn’t tell the diesel apart from the gas EcoBoost V6s, both from the outside and inside while idling, and under throttle.

This comes thanks to a specially calibrated, high-pressure, common-rail fuel injection system that pulses at 29,000 pounds per square inch — yes, you read that correctly — which enables its much smoother, quieter drive, and reduced emissions. It also features a graphite iron block alloy with a forged-steel crankshaft, increasing strength and durability while reducing weight when compared to traditional turbodiesel engines. Though, while all the F-150’s mills are smooth operators in general, the turbodiesel V6 really sets itself apart with the way it delivers its power.

One can’t tell the diesel apart from the gas EcoBoost V6s, both from the outside and inside while idling, and under throttle.

The new Power Stroke sixer produces 250 horsepower and 440 pound-feet of torque through the usual 10-speed automatic new F-150 buyers have become accustomed to. That might seem modest to the Lariat’s base gasoline 2.7-liter EcoBoost V6 at 325hp and the flagship 5.0-liter Coyote V8’s 390hp, but the V6 diesel produces 40 more torques. Against the more powerful 3.5-liter gas EcoBoost V6 — with 375hp and 470 lb-ft, or 450hp and 510 lb-ft, depending on which version you pick — the new Power Stroke pales. In the fuel economy department however, the Power Stroke tops them all with an EPA-estimated 30 mpg on the highway and 25 mpg on the combined average.

Because torque comes in and peaks way earlier for the diesel, the result is significantly smoother acceleration, which really makes much better use of the 10-speed automatic. So when it came to off-roading the F-150 in a specially arranged course, the F-150 diesel V6’s torque proved a worthy companion since heavy snow made the course extraordinarily muddy. Not once did it get stuck and it even managed to climb and descend nearly 30-degree slopes, all on standard Goodyear Wrangler road tires. Hugely impressive!

When it came to towing a horse trailer with a total load of over 5,600 pounds, the F-150 diesel felt up to the task. But despite its max tow rating of 11,400 pounds, it’s hard to imagine towing anything heavier since it felt slightly strained making it up inclines. Bear in mind however, we were just outside the “Mile-High City,” at considerably higher in elevation where the air is just slightly thinner, challenging the performance of turbodiesel motors even further. Nonetheless, the F-150 Power Stroke V6 performed admirably.

So it’s best to approach the new diesel V6 knowing it’s a midgrade option with a focus on fuel efficiency and bolstered refinement, while the towing capacity is there for that one time out of the year you might have to haul something heavy.

Because we’re a fan of technology here at DT, that means we’d opt for all the bells and whistles of the Platinum trim in “Blue Jeans” blue for the closest shade to DT blue. That puts the price at around $60,920, but who doesn’t like being pampered with their driving experience, no matter the task?

Despite its middling status, Ford boasts the new Power Stroke offers best-in-class torque, towing (11,400 pounds, comparable to the V8’s rating), and payload ratings (2,020 pounds for fleet trucks, 1,940 for retail versions), and best-in-class fuel economy. Though with the Ram 1500 EcoDiesel being its only competitor until General Motors introduces its new light-duty diesel for the Chevrolet Silverado and its GMC cousin, the Sierra, it’s not exactly difficult to attain such accolades. And if towing or hauling are your priority, the gasser EcoBoost V6s still reign superior.

Otherwise, the Ford F-150 Power Stroke diesel V6 serves up a driving experience that’s more refined than its gas siblings, without sacrificing too much utility and compromising the versatility, comfort and everyday usability of the light-duty, half-ton F-150. And because its only competitor is the Ram 1500 EcoDiesel, which is still based off the previous generation , the Ford F-150 Power Stroke is the latest and greatest currently available.

If you’re looking for a light-duty, half-ton diesel-powered pickup truck with nearly similar capability and versatility, but don’t want to make the massive leap to a heavy-duty version that compromises comfort for utility at a significant price premium, then yes, absolutely!