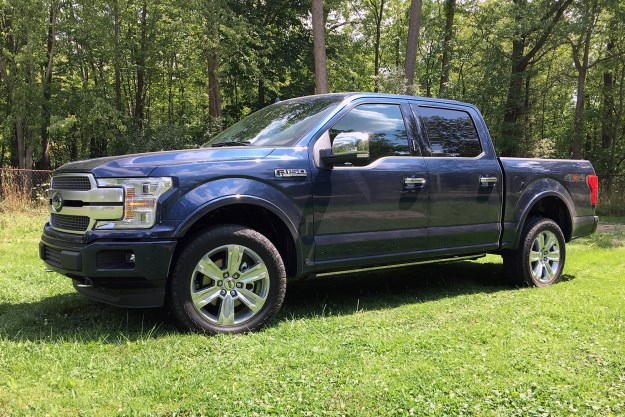 Ford’s first truck, the Model TT, went on sale in 1917. In the 100 years since, the Blue Oval company has established a vehicle lineup that is one of the most recognizable in the world with its F-Series full-size pickup truck. From construction sites to school yards to office parks, the F-Series is hardly an anomaly.

It’s this familiarity that has helped the Ford F-150 remain the truck sales champ for the last 40 years, nearly half of Ford’s lifetime. And, for the last five years, as consumer tastes have gravitated toward larger, taller vehicles, the F-150 has been the best-selling vehicle, period. The Toyota Camry can no longer touch this. ‘Murica. With no signs of slowing down, Ford’s giving the all-American hauler some updates, so we trekked out to see all of this truck’s neat tricks for our 2018 Ford F-150 first drive review.

In 2015, Ford introduced its all-new 13th-generation F-Series with a segment-first aluminum-alloy body and box fitted over a high-strength steel frame. With only two model years under its belt, the 2018 F-150 is merely a mild refresh.

Year-over-year updates include increases in power, payload, and per-gallon mileage.

Although significant changes are minimal, year-over-year updates include increases in power, payload, and fuel efficiency. Automatic start-stop is now included and a segment-first 10-speed automatic transmission is available on all models not equipped with the 3.3-liter V6.

Starting prices have increased slightly from $26,730 MSRP to $27,380, but can easily surpass $60,000 based on vehicle configuration and options.

According to Ford, the F-150 “fits all facets of consumer needs” with five engine choices, three cabin sizes, two drive types, and up to five trim levels. Yes, whatever the need may be, there is probably a Ford truck perfect for it.

The vast number of choices, however, can overwhelm buyers. I was so flustered while drafting up a specifications sheet that I needed a couple of adult beverages just to ease my exasperation. I can only imagine what actually shopping for one would do. Perhaps require something a bit more top-shelf than Miller High Life? Incidentally, we do have a breakdown of Ford F-150 options to help you choose.

The usual suspects of regular, extended, and crew cabs are available, with a 6.5-foot box configurable for all three. Additionally, an 8-foot box can be outfitted for regular and extended cabs while a 5.5-foot box is available for crew cabs.

All cabs can be ordered with either two- or four-wheel drive, and all but the high-output 3.5-liter EcoBoost V6 engine can be selected for any cab configuration. That powertrain is in the Raptor, which itself is limited to either the two(ish) door SuperCab or four-door SuperCrew and the shorter 5.5-foot box.

Automatic start-stop engine technology is standard for all F-150 models.

Are you still with me? Because we haven’t even discussed trim levels yet. XL would be your base trim and moves up the ranks to XLT, Lariat, King Ranch, and Platinum. These, of course, also vary by cab size, but a truck build has to start somewhere.

A six-speed automatic transmission with Tow/Haul and Sport modes is standard on 3.3L models, while the new 10-speed is standard for all other engine-model configurations and features additional Snow/Wet and EcoSelect drive modes.

In terms of design, the 2018 F-150 receives a new front grille, headlights, taillights, tailgate, 18- to 22-inch wheels, interior trims, and an array of appearance packages for various trim levels.

With standard features just basic enough to get the truck moving, available technology is aplenty and seemingly essential, including some new-for-2018 items.

Ford SYNC isn’t cumbersome to use, even if its overall visual design feels rudimentary. But perhaps that is part of its ease-of-use appeal. Big, straight-forward on-screen buttons mean you’re less likely to tap the wrong command.

In contrast, the driver information monitor offers too much, and isn’t initially intuitive. Situated within the instrument cluster, the six data screens are accessed via the already button-heavy steering wheel, and subfolders full of subcommands can prove overwhelming while driving.

Comfort and convenience are not lacking in the F-150. But keep in mind, all good things must start somewhere. With few manually operated interior options left, expect your wallet to power everything — such as standard cloth seating surfaces being upgradable to leather seats with heated and ventilated functions.

Interior room is plentiful for petite passengers and Pro Bowl-bound linebackers alike. During a jaunt through an off-road course, the seat belts proved to be supportive with sturdy grab handles available as needed. The large windows showcased how much mud we generously sprayed from the man-made pit. The sludge-covered view was rather glorious, to be honest.

Fit and finish is fine, but seats could use more bolstering. Also, for a modern vehicle, there is still a heavy reliance on buttons and knobs, however, you can perform many of the same functions via touchscreen or voice command.

During the abbreviated ride-and-drive program in Michigan, I was able to only get behind the wheel of a 2.7L and a 5.0L-equipped truck, but both were more than capable for the tasks at hand: the former towing a 7,500-pound load, the latter barreling along a drive route frequently used to evaluate vehicles throughout the year.

My first tester was an XLT Crew Cab equipped with a 2.7L EcoBoost V6 engine, which, depending on axle ratio and drive type, can tow anywhere from 7,600 to 8,500 pounds. Oh, and full disclosure: This was my first time towing anything, ever.

Power was plentiful and driver-assistance technologies, like trailer-specific blind-spot monitoring and rearview camera hitch assist, made my first-time experience no big deal. My initial anxiety and unease dissipated quicker than expected.

On the dynamic drive, I was behind the wheel of a 5.0L V8-equipped XLT Crew Cab with a Sport package, which is more about adding chrome and color embellishments than suspension or handling improvements. Did the F-150 feel like a heavy burden to bear along the sometimes narrow, usually twisty roads? No, but weight-saving aluminum or not, it wasn’t going to hug curves with the svelte finesse of, say, a Mazda MX-5 Miata either.

And a diesel is coming! Scheduled for next spring, the all-new 3.0L Power Stroke V6 will be paired with the new 10-speed automatic.

Government crash safety ratings are not yet available but the 2018 F-150 does feature the segment-first pre-collision assist with pedestrian detection, which uses sensors to detect obstacles ahead, alert the driver, and even brake on its own if you fail to act. Carryover systems include: lane keep assist, reverse assist, adaptive cruise control, automatic high-beam, a 360-degree camera, blind spot monitoring with trailer coverage, and other trailer/hitch-assist technologies.

Lane keep assist in normal mode is aggressive enough for drivers to notice, but not annoyingly overbearing as with some other vehicles. The 360-degree camera can be helpful but offers a rather skewed angle on the split-view display.

As with all technology, don’t rely on it wholeheartedly, and do look about your surroundings. For example, a neighboring vehicle’s door was wide open, but merely appeared as a shadow from the overhead view.

In order to satiate every need, the refreshed 2018 Ford F-150 does seem to offer something for everyone, but getting carried away checking option boxes will add up to the cost of a Jaguar quickly. Also, consumers in this segment tend to lean heavily on legacy, not necessarily deviating from what has long been familiar to them. This doesn’t always translate into purchasing the best vehicle for the job, but to Ford’s credit, that loyalty didn’t come from nowhere. The F-150’s rarified lineage continues to help Ford keep the sales crown with its F-Series lineup.