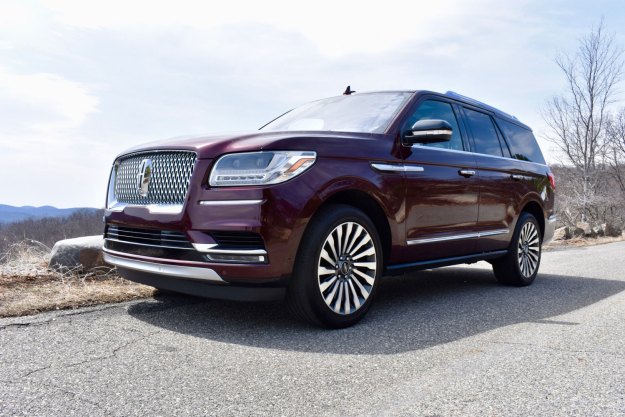 “The 2018 Lincoln Navigator is a big truck that does a decent impression of a luxury car.”

Lincoln built its reputation on gigantic coupes and sedans, but its most successful model of the 21st century is a gigantic SUV. The redesigned 2018 Lincoln Navigator is the Ford luxury brand’s most expensive model, and likely its most important. Lincoln says it’s selling Navigators as fast as it can build them, but the brand’s SUV flagship still faces competition from the Cadillac Escalade, Infiniti QX80, Land Rover Range Rover, Lexus LX 570, and Mercedes-Benz GLS-Class.

The 2018 Navigator is available in four trim levels: Premiere, Select, Reserve, and Black Label. The Select and Reserve trim levels are available in standard or long-wheelbase L body styles, and Lincoln offers a choice of rear-wheel drive or four-wheel drive across the model line.

If you’re a spy, you shouldn’t drive a Navigator. It’s hard to be subtle in a vehicle this big, and Lincoln doubled down with bold styling that’s well executed and handsome (although we would have loved to see Lincoln go all the way and include the gullwing doors from 2016’s Navigator concept). Approach the Navigator with key fob in hand, and the headlights and Lincoln logo in the grille light up. At night, the Lincoln logo is projected onto the ground, a cute touch that’s the perfect invitation to step inside.

As with previous generations, the 2018 Navigator is based on the Ford Expedition, but you wouldn’t know that from looking at the interior. What seem like yards of wood, tastefully applied chrome, and soft leather combine to make this more than just a gussied-up Ford cabin.

A 10.0-inch touchscreen stands proud of the dashboard, paired with a 12.0-inch reconfigurable instrument cluster and, in our test vehicle, a head-up display. The Navigator also sports six USB ports, four 12-volt power outlets, and a 110-volt plug, with an optional wireless phone-charging pad. In addition to power, the Lincoln has plenty of Wi-Fi to go around, boasting a hotspot that can support up to 10 devices. The rival Cadillac Escalade also offers Wi-Fi, but “only” for seven devices.

Like most other Lincoln and Ford models, the Navigator uses the Sync 3 infotainment system, in this case with Apple CarPlay and Android Auto compatibility. The central touchscreen was very responsive and entering commands, whether by tapping on the screen or by voice, was fairly straightforward. Still, we felt additional analog controls would have been helpful, and the graphics on the central screen are basically the same as what you get on a Ford Escape. At least Lincoln did its own thing with the 12.0-inch screen that serves as the driver’s instrument cluster. That display featured cool-looking graphics that were also easy to read at a glance.

The graphics on the central screen are basically the same as what you get on a Ford Escape.

The Navigator has an advantage over the Escalade, in most measures of passenger space (although Cadillac does offer slightly more first-row head and legroom), with most other big luxury SUVs coming in behind the two Americans. Remarkably for any vehicle with three rows of seats, the Navigator’s rearmost row is actually fairly comfortable for adults. The 20-speaker Revel Ultima audio system produced good sound across all three rows as well, so the third row really isn’t much of a penalty box at all. Keeping the third row up drastically reduces cargo space, but that’s always the case with three-row vehicles.

You’d expect a vehicle as big as the Navigator to offer plenty of interior space, but what raises the bar to a luxury level (for the front occupants at least) is Lincoln’s “Perfect Position” seats. The front seats are 30-way adjustable (they also offer heating, ventilation, and massage), and we found it easy to get everything dialed in exactly right. The result was a comfortable ride without the feeling of sinking into an overly soft couch, as is the case with some luxury-car seats.

In the case the driver gets distracted by the built-in massager, the Navigator is available with adaptive cruise control and lane-keep assist. It also gets a 360-degree camera system (which really comes in handy when parking this beast), park assist, and the Trailer Backup Assist system also offered in the Ford Expedition and F-150 pickup truck, which automatically steers when backing up with a trailer.

Most automakers offer different driving modes, but Lincoln tried something different with the Navigator. Where other cars might get an Eco or Sport mode, you get Excite and Conserve in this Lincoln. Neither word really describes the driving experience, though.

The Navigator uses the same 3.5-liter twin-turbocharged EcoBoost V6 and 10-speed automatic transmission as the Ford F-150 Raptor. The V6 produces the same 450 horsepower and 510 pound-feet of torque as it does in the Raptor, and is coupled to the same 10-speed automatic transmission. The Cadillac Escalade uses the same 10-speed auto, but its 6.2-liter naturally aspirated V8 can only muster 420 hp and 460 lb-ft. The Lincoln V6 also boasts more horsepower than the V8 engines in the Infiniti QX80 and Mercedes-Benz GLS550, and more torque than the Infiniti (The Merc has 516 lb-ft).

Like the F-150 and Expedition, the Navigator has an aluminum body, which Lincoln claims saved 200 pounds over a conventional steel body. But base curb weight for a standard-wheelbase four-wheel drive model like our test vehicle is still a hefty 5,855 pounds.

The Navigator doesn’t feel that heavy from behind the wheel, though. Even with all of that weight to move, acceleration is effortless. The big Lincoln also proved remarkably easy to pilot through gaps in suburban traffic. However, reminders of its girth came on twisty Connecticut back roads, in the form body roll and easily overworked brakes. So while the power is exciting, the chassis can’t keep up. The ride is fairly comfortable, but the Navigator still feels like a truck, alternately bouncing over bumps and transmitting shudders through the cabin over broken pavement.

The EcoBoost V6 is a great engine that doesn’t compromise on power, but doesn’t really improve on V8 fuel economy either.

Lincoln parent Ford has pitched its EcoBoost engines as the best of both worlds, offering higher fuel economy without sacrificing power. In another era, this Navigator would have had a V8 under its hood instead of a V6. The EcoBoost V6 is a great engine that doesn’t compromise on power, but doesn’t really improve on V8 fuel economy either.

Four-wheel drive Navigators like our test vehicle carry an EPA rating of 18 mpg combined (16 mpg city, 21 mpg highway), but we only managed 12.1 mpg, according to the car’s trip computer. Lincoln may have pushed hard for better gas mileage, but the Navigator is still a big truck and will never be confused with anything truly fuel efficient. So much for conservation.

Lincoln offers a 4-year, 50,000-mile bumper-to-bumper warranty, and a 6-year, 70,000-mile powertrain warranty. Cadillac offers the same amount of coverage on the Escalade. As a newly redesigned model, it is difficult to predict future reliability, for the 2018 Navigator, although Consumer Reports gives it an “average” score based on previous model years.

We would stick with our test vehicle’s Reserve trim level in order to get the 20-speaker Revel Ultima audio system, which is an optional extra not available on lower trim levels. We’d also add the Perfect Position seats, and call it a day.

The 2018 Lincoln Navigator is a well-executed attempt at a type of vehicle that really doesn’t make much sense. It’s a big truck trying to do an impression of a luxury car, without diluting all of the truck stuff. But sales numbers prove that this is a game with high stakes, and Lincoln plays it well.

The Navigator’s most obvious rival is the Cadillac Escalade, which falls (slightly) behind the Lincoln in fuel economy and third-row space. Lincoln’s Sync 3 infotainment system is also a lot easier to use than Cadillac’s CUE, and we think the Navigator is better looking than the Escalade, too.

While the Navigator doesn’t offer much in they way of off-road capability, other SUVs in this price range, such as the Land Rover Range Rover, Infiniti QX80, and Lexus LX 570 do. The Infiniti can also match the Navigator’s towing capacity in certain configurations.

Yes. The Navigator’s swanky interior makes it much more of a true luxury vehicle than most of its rivals, and the Lincoln offers plenty of space, towing capability, and sensible tech.