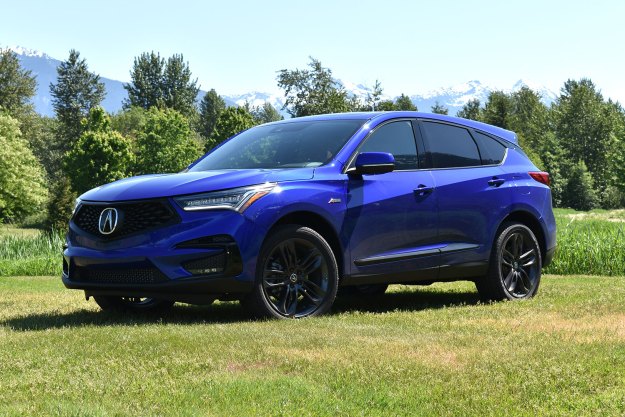 “The forward-thinking RDX sets itself apart from the more staid European competition.”

Acura has never really known which way to take the RDX. The first-generation RDX tried to be different, adopting a car-like look and feel when most SUVs were trying to be trucks. The second-generation model went in a more conservative direction. Now the third-generation 2019 Acura RDX is changing course again, emphasizing tech and sporty driving dynamics like never before.

The Acura RDX is available in base, Tech, A-Spec, and Advance trim levels. Front-wheel drive is standard on all four trims, while all-wheel drive is a $2,000 option. The base model starts at $37,300, but we drove A-Spec ($43,500) and Advance ($45,400) models. The A-Spec is primarily an appearance package added onto the Tech model, which includes features like navigation, 12-speaker audio system, and leather seats. The Advance is the range topper loaded with features like active suspension, a head-up display, and 16-speaker audio system.

The RDX’s dashboard is like nothing in any other current SUV. A drive-mode knob borrowed from the NSX supercar sits front and center, and the center console arches up, creating a convenient storage nook for your phone (complete with 12-volt and USB charging ports) below. But the real centerpiece is Acura’s new True Touchpad Interface, which controls most infotainment functions.

Acura isn’t the first automaker to try a touchpad: Lexus uses one with its infotainment systems, and we’ve found it to be quite infuriating to use. But while Lexus relies solely on a track pad, similar to what you’d find on a laptop. Acura added hard press points at the corners. Press at a corner, and the cursor moves to the corresponding area on the 10.2-inch display screen. Otherwise, just swipe across the pad to move the cursor, and press gently to select an on-screen icon for functions like music, navigation, and phone.

We found the system to be better than Lexus’ touchpad, but not quite as good as competitor systems, like BMW’s iDrive, that use a rotary controller to navigate on-screen menus. The Acura system comes with a significant learning curve: When driving, it was hard to coordinate the movement of our finger on the touchpad with what we were seeing on the screen, all while trying to pay attention to the road. We imagine an owner could get used to this over time, but first-time users will find it challenging.

The RDX relies more on technological tricks to deliver a sporty experience than human-machine harmonization.

At least Acura had the good sense to include lots of hard buttons. The driver can use buttons for all climate-control functions, including turning on the heated and ventilated seats on the higher-level A-Spec and Advance models we drove. Scroll wheels on the steering wheel make changing tracks on a playlist easy, and volume is controlled using a simple knob. This means the dashboard is a bit of a mess aesthetically, but functionally it works well.

The RDX comes standard with Apple CarPlay, as well as a built-in Wi-Fi hotspot. But Android Auto won’t be available at launch, because it can’t interface with the touchpad controller (despite the fact that the entire infotainment operating system is Android-based). Acura does plan to make Android Auto available once that issue is resolved.

The vehicles we drove were equipped with the optional Acura ELS Studio 3D 710-watt, 16-speaker audio system. Acura and partner Panasonic used tricks like putting speakers in the headliner, and brought in Grammy-winning music producer Elliot Schiener. The result is a quality music experience that rivals that of systems in much more expensive cars, with more elaborate hardware.

Aside from the tech, the interior itself features high-quality materials like brushed aluminum and nice-looking Olive Ash wood trim. The A-Spec model’s optional red leather upholstery with gray suede inserts (in a pattern inspired by tuxedos, Acura says) is the kind of risk we’d like to see more automakers take with interior styling.

The Acura touchpad system comes with a significant learning curve.

When it comes to interior substance, the RDX compares favorably to its rivals. Headroom, legroom, and shoulder room in both the first and second rows is on par with the Audi Q5, BMW X3, Mercedes-Benz GLC-Class, and Volvo XC60. At 29.5 cubic feet, the RDX also offers more cargo space than any of those models with the rear seats in place. However, the Audi has more stowage space when the seats are folded, at 60.4 cubic feet to the Acura’s 58.9.

The AcuraWatch bundle of driver aids is standard on all RDX trim levels. It includes autonomous emergency braking, forward collision warning, adaptive cruise control, lane-keep assist, and lane-departure warning with road-departure mitigation (if you’re about to veer off the road, it will apply steering if necessary).

Acura claims sportiness was one of its engineers’ top priorities for the RDX, even referring to the new model as a “sports sedan utility vehicle.” So how did the RDX measure up to that boast? Pretty well, actually.

Under the hood sits a 2.0-liter turbocharged four-cylinder engine that produces 272 horsepower and 280 pound-feet of torque. That’s more than you get in base versions of the Q5, X3, and GLC, but Audi, BMW, and Mercedes all offer performance-focused variants with more power (albeit at higher prices).  The RDX also outmuscles the base Volvo XC60 T5, but not the T6 model, which is rated at 316 hp and 295 lb-ft. But the XC60 T6 does start about $3,000 above the top-spec RDX Advance.

SH-AWD is the RDX’s secret weapon.

The RDX’s turbo-four is coupled to a 10-speed automatic transmission with standard front-wheel drive, or Acura’s Super Handling All-Wheel Drive (SH-AWD). This system, which was used on the first-generation RDX but not the outgoing second generation, is different from many others because it incorporates torque vectoring. That means power is shunted between the rear wheels to help turn the car into corners. SH-AWD is the RDX’s secret weapon.

On the road, we could feel the system working to nudge the car into position for faster corner exits. In its default mode, the system also sends 70 percent of its power to the rear wheels, making the RDX feel more like a rear-wheel drive car. We even got the RDX completely sideways on a gravel slalom course Acura set up (with the traction control turned off, that is). Most owners won’t hoon their luxury SUVs like this, but it’s nice to know that they could.

That being said, the RDX doesn’t exactly form a bond with its driver. Even by modern standards, the RDX relies more on technological tricks to deliver a sporty experience than good old-fashioned human-machine harmonization. We drove the RDX back to back with a Q5, X3, GLC, and XC60. Only the X3 matched the RDX’s red-blooded nature, and it did so in a more satisfying way. The Acura relies heavily on its trick all-wheel drive system to be sporty. The BMW just is.

Acura expects EPA fuel-economy ratings 24 mpg combined (22 mpg city, 28 mpg highway) for base, Tech, and Advance models with front-wheel drive, and 23 mpg combined (21 mpg city, 27 mpg highway) for all-wheel drive versions of those models. The A-Spec carries a 1-mpg penalty in the highway category with both front-wheel drive and all-wheel drive. Insurance Institute for Highway Safety and National Highway Traffic Safety Administration crash-test ratings are not available at this time.

Acura offers a four-year, 50,000-mile basic warranty and six-year, 70,000-mile powertrain warranty. Because the RDX is a redesigned model with relatively few carryover parts from the previous generation, it is difficult to predict reliability.

Acura expects the RDX Tech to be the volume trim level, but we’d upgrade to the A-Spec model. The A-Spec’s model-specific styling features, including blacked-out exterior trim, 20-inch wheels, and aluminum and suede interior trim, are an appropriate match for the RDX’s sporty character, and help it stand out from the SUV crowd. We’d also pay the extra $400 for Apex Blue Pearl or Performance Red Pearl paint to make even more of a visual statement.

The A-Spec also includes the 16-speaker audio system, which is the main optional tech feature we think is worth spending extra on. The Advance model that sits above the A-Spec in the RDX hierarchy includes even more equipment, but considering that essential features like the touchpad-based infotainment system and AcuraWatch driver-aid suite, we’d rather save a bit of money and stick with the A-Spec.

The Acura name isn’t as evocative as Audi, BMW, or Mercedes-Benz, but Honda’s luxury brand is trying hard to change that with the 2019 RDX. By doubling down on sporty character, and taking some styling and tech risks, the RDX sets itself apart from the more staid European competition. The RDX is also a good value: The Germans climb much higher than the $45,400 price of the top RDX Advance trim level. Acura still needs to refine that touchpad and put more soul into the driving experience, but the RDX is still a strong contender in a competitive segment.