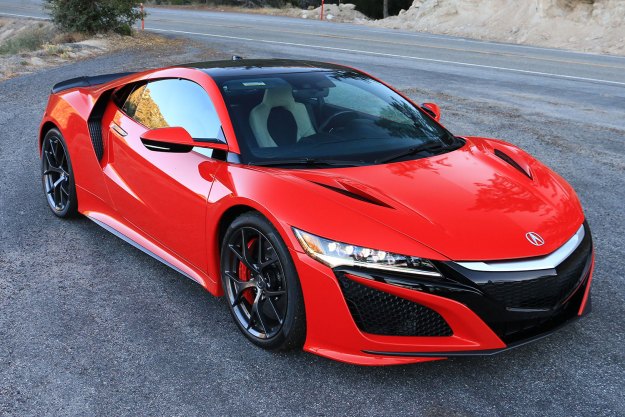 “The new Acura NSX is engaging when driven hard, yet easy to live with day-to-day.”

After a decades-long gestation period, the second-generation Acura NSX is finally roaming the roads of America. Last year we tested it both on the street and track, but it was clear that we’d need more seat time with Acura’s mid-engine hybrid sports car to get a better sense of how it works as an everyday supercar – a beloved attribute of the original NSX, and one which the automaker seeks to reclaim with this thoroughly rethought second-generation car.

The new NSX enters a decidedly different marketplace than its predecessor. Supercars have never been more civil to with live with, and their performance more accessible, than they are today, making it more difficult for the NSX to stand out in a crowd of highly capable and compelling performance machines.

Rather than seeking to be the temporary top dog of some nebulous performance metric, the NSX instead distinguishes itself from its completive set through engineering, bringing the kind of hybrid hypercar technology you’d find in a LaFerrari out of seven-figure territory and into realm of super-sports cars. But does this approach work in what could potentially be a daily-driven machine? We spent a week with the NSX on the streets and mountain roads in and around Los Angeles to find out.

While the second-generation NSX has its gas-powered engine mounted in the middle, the similarities between the new car and the original largely end there. Motivated by a 500 horsepower, twin-turbocharged 3.5-liter V6 that’s supplemented by trio of electric motors – two driving the front wheels and another working in conjunction with the gas engine to drive the rears – the system’s total output is 573 horsepower and 476 pound-feet of torque, which puts a lot more motivation underfoot than the original car’s naturally aspirated, 290 horsepower 3.2-liter six-cylinder did. A new nine-speed dual clutch gearbox sends the grunt to all four corners.

Along with utilizing a host of contemporary performance tech like active magnetorheological suspension damping, torque vectoring, and variable ratio electrically-assisted steering, the new NSX seeks to maintain the legacy of accessibility established by the first-generation car with good outward visibility, ergonomic interior design, and a range of easy-access driving modes that affect transmission behavior, suspension stiffness, exhaust volume, and the use of the electric motors.

The new car’s exterior design reflects its high-tech approach – where the first generation NSX was curvaceous and understated, the second generation is angular, aggressive, and demands attention.

It’s a decidedly different animal than the original, but as Acura tells it, that’s kind of the point.

With a base price of $156,000, one can rightfully assume that the NSX comes with a healthy list of equipment as standard. But supercar buyers are known to want some choices to help their ride stand out from the crowd, and Acura is happy to oblige.

The NSX feels surprisingly approachable, user-friendly, and fun to drive.

Our tester was outfitted with a number of optional upgrades both inside and out, including the Carbon Fiber Exterior Sport package, carbon-ceramic brake rotors with red calipers, Pirelli Trofeo R tires, the Audio and Technology package, and a handful of other individual upgrades, which push the as-tested price to $200,500 with destination.

Although that kind of coin puts this Acura in some highly regarded company from brands like Porsche and McLaren, the NSX is well equipped for both street and track duty in this configuration, and also quite civil around town.

While there’s enough notable technology on-hand in the NSX to fill a book – like the one Acura gave us when they dropped off the car – the power train is the most interesting element of the equation.

The car features four driving modes in total – Quiet, Sport, Sport+ and Track. Set to either Quiet or Sport mode, the car will shut off the gas engine under certain conditions and operate solely on electric power, much like typical gas-sipping hybrids. In the more aggressive modes of Sport+ and Track, the car will use all the means of propulsion available to motivate the car, but the gas engine will remain on regardless of circumstance. A regenerative braking system keeps the hybrid batteries powered up.

Inside, the readout offered to the driver is a mixture of information about engine revs, the current Dynamic Mode setting, and other performance-related fare, as well as how much electric assist is being applied to your throttle inputs and the amount electric power on hand. While it’s initially odd to find this sort of eco-minded data in a mid-engine machine with a pair of turbos and a dual-clutch gearbox, it’s something we should grow accustomed to. This hybrid powertrain approach is likely to become a common tactic in high performance vehicle design in the coming years, as emissions and fuel economy standards become more strict.

While the approach here might seem a bit convoluted on paper, it’s surprisingly well sorted in practice, and NSX’s simple center stack layout, with the large Dynamic Mode knob serving as its center piece, makes the car’s sophisticated hardware easy to manage from behind the wheel.

There are areas where the simplicity doesn’t necessarily work in Acura’s favor. The infotainment system, which is ostensibly pulled straight out of a Honda Ridgeline, serves as a good example. While we’ve expressed our minor grievances with this system in reviews of vehicles like the aforementioned Ridgeline and the Civic Type R, here in a $200K car those issues with overall visual presentation, performance, and feature set seem a bit more egregious.

Though the interior of the NSX lacks some of the flourish found in cars like the Audi R8 and McLaren 570S, the materials, ergonomics and overall presentation work well and feel carefully considered. It’s a comfortable place to do the business of driving, whether that’s on a demanding back road in Sport+ mode or when crawling along in freeway traffic in near silence when Quiet mode is set.

Our tester was outfitted with the optional Semi-Aniline Orchid Leather and Alcantara seats, which proved both comfortable for long stints behind the wheel, and well bolstered enough to keep us planted during spirited driving sessions out in the Angeles Forest. While the cabin isn’t quite as refined as some European offerings that play at this price point, the interior’s aesthetic is well-matched to the car’s overall design, and the ergonomics help make up for any perceived shortcomings in terms of material quality or visual presentation.

Although the NSX’s 573 horsepower and 191 mph top speed aren’t segment-busting numbers, make no mistake – this car is quick. Launch control is easily accessed by switching over to track mode and simply holding the brake and applying throttle, and with the power being applied to all four corners, supercar thrust is not only achievable, but predictable and consistent.

Regenerative braking is not always a welcome feature in high performance cars, as the systems have been known to feel as though they’re dragging the car down, even without any brake input. That’s not the case here – in fact, the system is almost imperceptible. What’s more, while carbon ceramic discs are great at dissipating heat and are more track-capable than conventional discs as a result (though just how worthwhile they are in a street car is a debate for another day), they’re often noisy around town, and have a tendency to be overly grabby at the top of the pedal. Neither was the case with this NSX, both when cold and after lengthy drives.

The nine-speed dual clutch gearbox impressed, as well. Not only is it quick to respond to paddle inputs, shifts felt so seamless that the occasional mid-corner gear change – a general no-no in performance driving due to its tendency to cause instability – did not unsettle the car whatsoever. Perhaps more importantly, the gearbox feels as refined and unobtrusive as a conventional automatic when operated around town and in traffic, a claim most other supercars simply cannot make.

Though the NSX’s emphasis is obviously on high performance, we made sure to spend some time with the hybrid system specifically, using electric-only power in various situations. While the system is usable in slow-moving traffic, the load threshold where the gasoline engine kicks is pretty low – the car couldn’t go up the slight grade of your author’s driveway under electric power. Moreover, it’s painfully slow off the line, which can potentially annoy traffic behind you during stop-and-go commutes.

While the system serves its intended purpose and will engage during low-load situations, the transition from electric-only propulsion to full power can be an annoyance, and it’s a transition that will happen fairly often in Quiet and Sport modes during a typical commute. As a result we used Sport+ mode by default. We wished for a customizable driving mode that would allow us to pick and choose our favorite attributes from among the car’s various adjustable systems.

The NSX is equipped with single-stage driver and dual-stage passenger front air bags, a driver’s side knee airbag, side airbags, and side curtain airbags. Active elements like anti-lock brakes, stability and traction control, electronic brake distribution and braking assistance technologies also help provide an additional element of safety and, like the airbags listed above, are equipped as standard. As is typical with low-volume performance cars, the NSX has not been crash tested by the IIHS or NHTSA.

The NSX feels surprisingly approachable, user-friendly, and fun to drive. Though its substantial price tag will make it a tough sell for supercar buyers accustomed to the typical players in that realm, the NSX’s performance, accessibility, and unique identity — both in terms of engineering and overall aesthetic — should not be overlooked.

Buying a super-sports car is an emotional purchase no matter how you slice it. At $200,000, there are more capable performance machines out there, and there are more lushly-appointed ones as well.

But none of them are an NSX and, for some buyers, that’ll be enough. This car has a cult following, and it will make its fans happy. For the rest of us, Acura’s “New Sports-Car Experience” holds appeal by virtue of how much its design differs from its competitors.

Considering the low-volume nature of the NSX, and the amount of time it took to bring the second-generation car to market, we don’t expect any significant revisions to the car soon.

Yes. Those with the means would be doing themselves a disservice to dismiss the NSX. While the badge might not carry the same weight as AMG, Porsche, or McLaren, this car is every bit as compelling in this price range.

For tech-loving gearheads, there’s really no other way to get this kind of hardware for less than three times the price. And perhaps most importantly, it actually works.