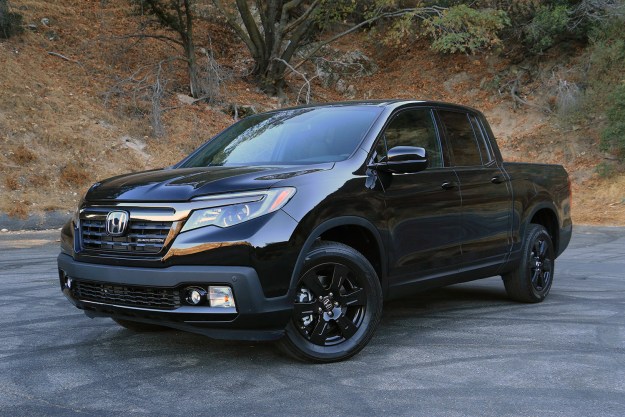 For Americans, the pickup truck is something of a sacred cow. There’s a long-held set of conventions that many truck buyers consider obligatory – a body-on-frame platform is chief among them, along with purpose-built hardware like four-wheel drive transfer cases and a solid rear axle. But the truth is that for the vast majority of truck buyers, these designs are overkill for the kind of use their vehicles see regularly, which opens the door for smaller, light-duty options. In our 2017 Honda Ridgeline AWD Black Edition review, we drove one of the segment’s key players.  2017 Honda Ridgeline AWD Black Edition review

When Honda first introduced the Ridgeline in 2005, they approached its design from a non-traditional perspective, focusing on offering the utility of a pickup with the ride comfort, ease of use, and efficiency of a car. It was a risky move, and the first generation Ridgeline proved to be somewhat polarizing to truck buyers both for its appearance and its car-like underpinnings.

But the clever design features found throughout the Ridgeline won it something of a cult following that kept the first generation pickup in production for nearly a decade. After more than a year off the market, Honda has returned to the fold with an all-new, second generation Ridgeline that builds upon the strengths of the original truck while addressing many of the issues that kept truck buyers at arm’s length the first time around.

First things first: The 2017 Ridgeline is still a unibody pickup, and it’s based on a front wheel drive chassis shared with the current generation Pilot crossover. However, the Ridgeline gets the strategic use of high strength steel throughout its chassis that the Pilot doesn’t. For those who are rational enough to have not already dismissed this truck out of the gate, there’s also a number of other improvements throughout the second generation Ridgeline.

The Ridgeline is far more comfortable and composed in operation when compared to mid-sized trucks of its ilk, whether on-road or off.

Honda sought not only to bolster the truck’s capability, but improve ride, handling, and aesthetics. That last one proved to be a deal breaker for a lot of folks, as the first generation Ridgeline’s looks were considered awkward by many.

This time around Honda has chosen to go a more conventional route with the truck’s bodywork. The much maligned buttresses between the top of the bed and the cab of the old model have been replaced by a more traditional truck bed that’s four inches longer than before, and the tapered front end gives the Ridgeline a more contemporary look that’s visually in line with rest of Honda’s current offerings.

Motivating the new Ridgeline is a naturally aspirated, 3.5-liter SOHC V6 that makes 280 horsepower and 262 pound-feet of torque. It sends the power to the front wheels through a six-speed automatic as standard while all-wheel drive is optional. There’s enough grunt on tap to get the truck to 60 miles per hour from a standstill reportedly almost two seconds faster than the previous model, but with a curb weight of over 4,500 pounds and transmission that’s a bit slow to make decisions, its pace still falls short of anything resembling urgency.

Opting for all-wheel drive raises ground clearance from 7.3 inches to 7.9 and boosts the tow rating from 3,500 pounds to 5,000. Towing capacity is one place where traditional body-on-frame trucks have an advantage, as the Ridgeline AWD’s 5,000 pound limit falls short of the class-leading Chevrolet Colorado V6 4×4 by one ton. But the tradeoffs for the Chevy’s superior towing capacity are the ride quality and handling limitations of body-on-frame trucks. The Ridgeline in contrast, with its fully independent suspension, is far more comfortable and composed in operation when compared to mid-sized trucks of that ilk, whether on-road or off. It’s substantially quieter too, and its quick, low-effort steering makes it feel more than a sedan than a pickup from the driver’s seat.

Moreover, Honda also asserts that ninety percent of mid-sized truck buyers never actually tow anything with their pickups. So instead of focusing on maximizing functionality that may never be utilized, they’ve concentrated their efforts on features that Honda thinks these buyers will actually find useful.

Take, for instance, the Ridgeline’s bed. The liner is molded from a dent, scratch, and UV-resistant fiber-reinforced polymer so that it can handle not only the rigors of hauling, but also the abuse of sun exposure so the material won’t be bleached out in just a few years’ time.

The Ridgeline’s heralded in-bed trunk makes a return in the second generation pickup, allowing for secured storage under the floor of the bed that also incorporates a drain plug at the bottom so it can also be used as an ice chest.

Adding to the Ridgeline’s tailgating prowess is the Truck Bed Audio function which, as the name suggests, uses the Ridgeline’s bed as an outdoor sound system. It might seem like a gimmicky feature at first, but in practice it sounds surprisingly good. Paired with the bed’s additional features, like a 400w power outlet and a dual action tailgate that can swing either down or out, the Ridgeline might be the most versatile party-mobile on sale today, and Honda’s betting on the notion that would-be owners will actually get some use out of these features.

The question of whether or not the new Ridgeline can turn around its sales numbers is, as they say, a battle for hearts and minds. Honda may be right about the intended purpose of pickups in comparison to their actual everyday use, and their strategy certainly makes sense both on paper and in practice.

But perception is a strong motivator in this segment, and those who look at their vehicle as a statement of purpose as much as a tool of locomotion may have a difficult time warming up to the Ridgeline. Still, with the crossover segment booming as buyers flock to car-like SUVs, the light-duty truck market seems more willing than ever to hear the Ridgeline out.

The 2017 Honda Ridgeline is the number one rated compact truck in terms of crash safety, with a five-star overall rating from the National Highway Traffic Safety Administration (NHTSA) and a Top Safety Pick Plus honor from the Insurance Institute for Highway Safety (IIHS). In addition to its standard durability, the Ridgeline is available with Honda’s suite of driver aids. Included in ‘Honda Sensing’ is active lane keeping assistance, adaptive cruise control, automatic emergency braking, and road departure mitigation.

How DT Would Outfit This Car

While some of the new Ridgeline’s coolest gadgets are reserved for the higher trims, we aren’t convinced they’re worth the big upcharge. Given the truck’s long list of standard features, we’ll stick with one of the entry-level grades. In particular, we’re partial to the Sport trim’s 18-inch black painted wheels, remote engine start, keyless entry, and tri-zone automatic climate control – a good bundle for $33,015.

Add all-wheel drive for $1,900 to expand the Ridgeline’s usability off-road and call it a day. If Honda’s infotainment system was more user-friendly, we might consider upgrading, but as it sits, the Ridgeline is a truck best served without complexity.

For many truck buyers, this purchase is just as much about credibility as it is about practicality. Separating ego from the equation can be a difficult task, as evidenced by the Toyota Tacoma’s ten-to-one sales advantage over the outgoing Ridgeline.

Yet for those who place rationality above all else, Honda’s approach with the Ridgeline can start to make a lot of sense in the right context, and this all-new model addresses a number of weaknesses found in the first generation truck while also improving upon its strengths.

Because the Ridgeline is so distinct among its competitors, there’s as good a chance people will cross-shop it with SUVs as they will with other compact trucks. Traditional body-on-frame trucks are more durable, and SUVs can seat more passengers. However, if you’re even considering the Ridgeline, it probably means you don’t need the specific characteristics of either an SUV or a traditional pickup. If that’s the case, Honda’s truck is quite appealing.

Every Ridgeline comes with Honda’s three-year/36,000-mile new vehicle warranty and a five-year/60,000-mile powertrain warranty. Beyond that, Honda prides itself on reliability, and we expect the Ridgeline to hold up quite well. Late in 2016, Honda issued a recall for faulty electrical wiring, but every new vehicle sold has already received the fix. Being just one year old, with an expected lifespan of nine years, the second generation Ridgeline will exist in its present form for quite some time. A refresh is expected in two to three model years.

That depends entirely on why you want a pickup. If you’re being honest with yourself (and it’s totally ok if this is true), you may want a truck for the aesthetic. That being the case, the Ridgeline’s “softer” exterior may not fit the bill. Alternatively, you may want a pickup because you plan to use it for serious hauling, towing, or off-road adventures. Once again, the Ridgeline won’t cut it. However, if you want the utility benefits of an open bed and the comforts of a crossover, there simply isn’t a better option.

Update: We’ve updated our Honda Ridgeline review to include safety information and our picks for customization options.