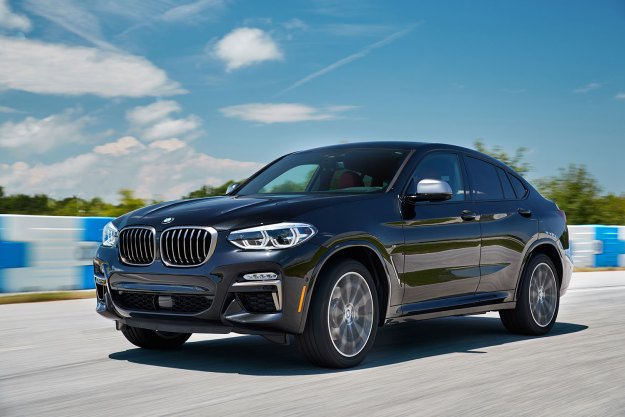 When the BMW first introduced the X4 back in 2014, many people, including us auto journalists, raised their eyebrows; we were perplexed by its purpose. It was more expensive than the X3 it was based on, less practical, and almost as costly as its larger X5 and X6 siblings, making one wonder why the X4 even existed.

To make things even more confusing, the X4 received its name to represent the fact that it was a crossover version (or “sports activity vehicle,” as BMW touts it) of the 4 Series, the replacement for the two-door 3 Series models – a result of BMW renaming its coupe models as even-number series. But, as anyone can tell, the X4 has four-doors. See what we mean about perplexing?

Yet, despite being a marketing conundrum, the old X4 still managed to sell like hotcakes, moving more than 200,000 units since its introduction. And, to keep its successful momentum, Munich’s finest followed up with an all-new second generation model.

The 2019 BMW X4 arrives in xDrive30i form with a turbocharged gasoline four-cylinder and an introductory price tag of $50,450. We got behind the wheel of the top-spec M40i form with a turbocharged gasoline inline-six and a $60,450 price tag. That puts it in the fighting ring with the similarly-shaped Mercedes-Benz GLC Coupe, Land Rover’s high-tech Range Rover Velar, the quick Porsche Macan, the corner-carving Alfa Romeo Stelvio, and Audi’s luxurious SQ5 if we’re strictly using price as our yardstick for comparison. The Audi is more of an upright, traditional-looking crossover, making the X3 M40i its ideal rival.

Like the outgoing model, the new X4 doesn’t hide the fact that its stylish, sloping roofline compromises interior headroom and space. Stepping out of the humid South Carolina summer heat and into the front buckets didn’t seem much different than hopping into an X3 because they’re the best seats in the house. That is, until you look rearward to find blind spots the size of Timbuktu. The story isn’t much better if you’re taller than the six-foot figure and relegated to the rear bench, or if you’re a tall parcel in need of upward trunk space. Thankfully, BMW made a panoramic moonroof standard so rear occupants don’t feel like sardines in a can.

Despite being a marketing conundrum, the old X4 still managed to sell like hotcakes.

Aside from the confined and limited space, the rest of the interior has benefitted from an uptick in build quality and design. The outgoing model’s build quality and choice of materials didn’t seem to match the original X4’s price premium over the X3. This has changed with the new model, thanks to more use of soft, plush leather and plastics that reflect the X4’s higher price tag. The design also seems more cohesive, returning to BMW’s tradition for penning driver-oriented dashboard designs.

Equipment wise, a 10.25-inch display with real-time traffic and parking information (when available) is standard on all models. It can be controlled either by its touchscreen or the latest rendition of BMW’s iDrive Touch Controller. The list of standard features also includes a bright and vibrant multi-color head-up display, BMW’s Active Guard suite (which bundles forward collision and daytime pedestrian detection with automatic braking), real-time speed limit notifications, plus pre- and post-collision safety systems that inform emergency responders of the specifics of the incident so that they can be more prepared to handle your specific accident, should you (but hopefully not) be involved in one.

Note BMW charges $300 plus an annual $80 fee for Apple CarPlay. It’s standard – without a subscription required – on many cars that cost a fraction of the X4’s price.

Once you start driving, however, the concerns for the X4’s challenging space all seem to disappear, particularly when the road gets quiet and less straight. Setting off from BMW’s Performance Test Center in Spartanburg, South Carolina, just outside the quaint and lovely city of Greenville, shielded us comfortably from the blistering heat and humidity of the south.

Once you drive the X4 M40i, the concerns for the X4’s challenging space all seem to disappear.

But once off the highway and in the hilly farmlands and twisty mountain roads of the Nanthala National Forest, BMW’s DNA for building the ultimate driving machines instantly shone through. Base X4s come with a 2.0-liter turbocharged four-cylinder that makes a modest-but-adequate 248 horsepower and 258 pound-feet of torque. The one we sampled came with BMW’s legendary 3.0-liter turbocharged inline-six, whose output of 355 hp and 365 lb-ft. of torque, well-matched eight-speed automatic, and zero-to-60-mph time of 4.6 seconds kept an even more perplexed smile plastered onto our face. We really weren’t expecting the X4 to handle not only better than the outgoing car but with a more tolerable ride.

The original X4 handled surprisingly well considering its status as a crossover with extra height, more weight, and a higher center of gravity. But the tuning balance between the well-sorted handling and a comfortable ride wasn’t perfect and left potential for tweaks – not to mention the need for a good chiropractor. BMW’s engineers listened and went straight to work with the second-gen model.

Engineers widened the axle tracks for a sturdier stance, enabling them to lower the center of gravity while modifying the suspension geometry to make full use of the chassis redesign. The result is a car that handles more like a 340i M Sport but with a little extra ground clearance.

The X4 really made us think there’s no way something this big and cumbersome should handle as well as it should.

The changes also paid off in the steering department. The old model’s electric power steering rack suffered from a lack of road feel, proper weighting, and feedback. The new model rights most of the original’s wrongs, it’s more engaging to drive, but it still doesn’t feel quite up to competing with the Porsche Macan or the Alfa Romeo Stelvio. The X4 nonetheless impresses in the twisties more than it ought to on paper. After a few quick fast laps around an arranged track at the BMW Performance Center, and a few attempts at drifting on the skid pad, the X4 really made us think there’s no way something this big and cumbersome should handle as well as it should. But it does, somehow.

Fuel economy figures aren’t available from the EPA yet. We can’t imagine fuel economy will change significantly compared to the outgoing model, which returned 18 mpg in the city, 25 mpg on the highway, and 21 mpg in a combined cycle. The new X4 happily encourages spirited driving so we imagine most drivers will see lower numbers.

Every BMW comes with the company’s four-year, 50,000-mile warranty (whichever comes first). It covers every part of the vehicle, including the engine and the transmission.

While the base model X4 comes decently equipped, and its turbo four-cylinder felt more than adequate, we feel the X4 is best experienced in top-spec M40i form. BMW’s famous straight-six engine makes the jump worthwhile. We also get the M Sport package which makes the suspension, brakes, and steering sportier while adding a specific body kit and more stylish wheels. It’s standard on the M40i, though note it’s offered at an extra cost on the xDrive30i. Of course, keeping with Digital Trends’ colors, we’d select Phytonic blue metallic and the eye-catching red leather with contrast stitching and piping.

Well, the new X4 is undoubtedly a nicely executed update and it’s sure to keep current fans satisfied. But, the M40i’s base price of $60,450 puts it within haggling distance of the larger, more luxurious X6. The sportier Porsche Macan S starts at $5,000 less, but is slower than X4 M40i. That continues to place the X4 in a weird spot on the market; buyers can cross-shop it with a wide variety of other vehicles.

Ultimately, it depends on whether you think Bavaria’s formula is the one for you. You won’t be disappointed if you sign the dotted line and drive home in an X4. Just don’t expect to carry anything tall – parcels or people – in it.