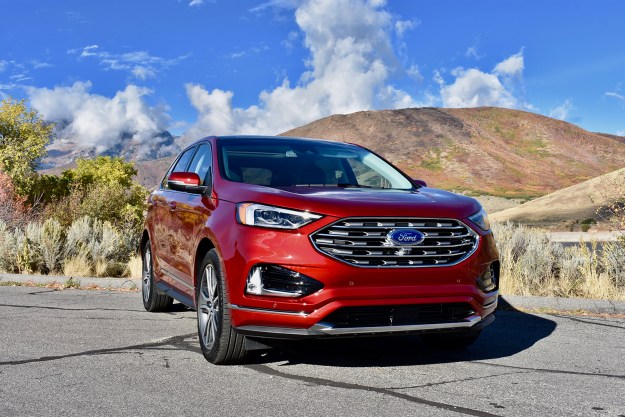 “The 2019 Ford Edge is an aging model reinvigorated with new tech and a welcome dose of sportiness.”

No one would blame you for forgetting the Ford Edge exists.

Wedged between compact crossovers and larger three-row midsize models, the Edge doesn’t really have a clear purpose. Its rivals are a small group of two-row midsize crossovers, including the Nissan Murano and the five-passenger version of the Hyundai Santa Fe. More competition will soon arrive in the form of the 2019 Chevrolet Blazer and a five-seat version of the Volkswagen Atlas. Ford’s plan to abandon cars in favor of trucks and SUVs in the United States will also elevate the Edge’s importance.

The Edge is the first crossover to wear the ST badge previously applied to performance cars like the Focus ST and Fiesta ST. It’s likely to be the most controversial of the 2019 model year updates, which also include changes to the interior and the addition of Ford’s new Co-Pilot360 suite of driver aids.

In addition to the ST, the 2019 Ford Edge is available in SE, SEL, and Titanium trim levels. Ford invited us to Park City, Utah, to try out the ST and Titanium. They’re the two top Edge models, with the ST focusing on performance and the Titanium on luxury. Pricing starts at $30,990 for a base Edge SE, while our ST and Titanium test vehicles were priced at $46,540 and $44,890, respectively. Both models had optional extras, including a performance brake package for the ST and Elite appearance package for the Titanium. All prices include a mandatory $995 destination charge.

The 2019 Ford Edge is a refresh of an existing model, rather than a full redesign, so things don’t change too dramatically in the cabin. The biggest difference is a rotary shift knob taken from the Fusion sedan, which frees up space for a wireless phone-charging pad in an adjacent cubbyhole. The ST performance model gets nicely bolstered leather-and-cloth sport seats, and we appreciate that Ford didn’t go with a boy racer-like flat-bottom steering wheel, instead opting for a more restrained but functional design. Titanium models get leather seats with heating and cooling in the front row.

Upper level models get the familiar Sync 3 system used in numerous other vehicles, with an 8.0-inch touchscreen and Apple CarPlay/Android Auto compatibility. Waze integration and Amazon Alexa connectivity are also available, the latter allowing drivers to do things like remotely unlock and start their car. For 2019, the Edge also gets a built-in 4G LTE Wi-Fi hotspot, which requires a dedicated data plan.

The Edge offers more overall passenger volume than the Nissan Murano or the five-seat version of the Hyundai Santa Fe (Hyundai also offers a seven-seat, three-row Santa Fe XL model). That translates into more shoulder room and legroom than the Hyundai and Nissan as well, although the Santa Fe offers slightly more front-row headroom. The Edge also beats its rivals in cargo space, at 39.2 cubic feet with the rear seats up and 73.4 cubic feet with the rear seats folded. The Ford also has a nice, wide aperture for loading large objects into the back.

The 2019 Edge is the first utility vehicle to get Ford’s Co-Pilot360 suite of driver aids, including forward collision warning, autonomous emergency braking, blind spot monitoring with cross-traffic alert, lane-keep assist, a rearview camera, and automatic high beams as standard equipment. Also standard but not considered part of Co-Pilot360 is post-collision braking, which automatically applies the brakes to prevent the car from rolling and hitting something else after an initial impact, according to Ford.

Despite the platform’s age, the Edge is admirably refined.

Optional driver-assist features include evasive steering assist (which boosts the power steering to make steering around obstacles easier) and adaptive cruise control with lane centering. The adaptive cruise control can bring the Edge to a complete stop and resume driving as long as the vehicle in front pulls away in less than three seconds. The lane-centering feature is one of the best we’ve seen, providing smooth, subtle steering inputs. The Edge did get flummoxed by one sharper than average highway curve, however, veering straight for a moment before correcting itself.

The Edge is also available with a park-assist system that can reverse the car into parallel or perpendicular spaces, and even steer the car out of tight spaces. The car handles the steering while the driver modulates speed with the brakes. In a demonstration set up by Ford, the system took a much more aggressive approach to parallel parking than this human driver ever would. With the Edge’s proximity sensors screaming in protest, the system reversed into a parallel space with what seemed like less than an inch of clearance to the car in front. This precision maneuver was accomplished without trading paint, however, leaving us both impressed and nerve-wracked.

The 2019 Edge is the first crossover to wear Ford’s ST performance badge. ST originated in Europe in 1996 and denotes souped-up versions of regular Ford vehicles. Ford brought the badge to the United States in 2012 with the Focus ST and added the Fiesta ST to the portfolio in 2014. Both are popular with car enthusiasts, but they are also both going away as Ford plans to eliminate all cars except the Mustang from its U.S. lineup. So, is the Edge ST a worthy successor?

The biggest differentiator between the ST and other Edge models is under the hood. The ST is the only 2019 Edge variant to get a V6 engine, in this case a 2.7-liter, twin-turbocharged EcoBoost unit that carries over from the discontinued Edge Sport. But it now produces 335 horsepower and 280 pound-feet of torque, compared to 315 hp and 350 lb-ft in the Edge Sport. The ST gets standard all-wheel drive (other models are available with front-wheel drive) and an eight-speed automatic transmission.

Ford also gave the ST some chassis upgrades to make better use of the extra power. The suspension tuning and transmission calibration are specific to the ST, as is the behavior of the all-wheel drive system in sport mode. Our test car was equipped with the optional performance brake package, which adds grippier 265/40R21 summer tires. Ed Krenz of Ford Performance also explained that, while his division did not engineer any bespoke parts for the Edge ST, it did take the crossover through the same evaluation process used for vehicles like the Ford GT and Shelby GT350R Mustang, pitting it against rival vehicles (in this case the Audi SQ5 and Porsche Macan) in on-track testing.

This crossover was teetering on the edge of irrelevance, but Ford has brought it back from the brink.

Ford also claims the Edge is its quickest-accelerating ST model ever. The frustratingly vague zero-to-60 mph time of “under 6.0 seconds” does beat Ford’s own estimates of zero to 60 mph in 6.9 seconds for the Fiesta ST and zero to 62 mph in 6.5 seconds for the Focus ST. But the two hatchbacks have higher top speeds: The Edge ST tops out at 130 mph, according to Ford, while the Focus and Fiesta can reach 154 mph and 144 mph, respectively. The Edge ST is quicker than a base Porsche Macan (zero to 60 mph in 6.3 seconds) but it’s unclear if the Ford can match the Audi SQ5’s 5.1-second zero-to-60 mph time.

From behind the wheel, the ST feels appreciably sportier than the average crossover. But that’s a low bar, considering that performance is usually not a priority for vehicles of this type in this price range. Still, we enjoyed the V6’s turbocharged grunt, and were impressed by the chassis’ poise, and the stopping power of the upgraded brakes. The Edge ST proves that family cars don’t have to be boring.

Yet the Edge doesn’t meet our expectations for a vehicle wearing the ST badge. Ford went further than its rivals in making a sporty crossover, but it didn’t go far enough. The performance upgrades improve the Edge, but they don’t transform it. The ST never stops feeling like a big, bulky crossover. We also found some outright negatives, including limp, lifeless steering and a cheesy “active noise control” feature that pipes tinny, unconvincing engine sounds into the cabin.

The Edge may make a questionable performance vehicle, but it’s a good overall daily driver. Despite the platform’s age, it’s is admirably refined. Wind noise on stretches of Utah highway was minimal and even the non-ST suspension makes a good compromise between ride quality and handling. All non-ST models get a 2.0-liter, turbocharged four-cylinder engine making 250 hp and 275 lb-ft of torque. That beats the 2.0-liter turbo four offered in high-end versions of the Hyundai Santa Fe, which can only muster 235 hp and 260 lb-ft (base models get a less powerful 2.4-liter inline-four). The Nissan Murano’s naturally aspirated 3.5-liter V6 beats the Ford engine on horsepower (260) but not torque (240).

Ford offers a three-year, 36,000-mile, bumper-to-bumper warranty and a five-year, 60,000-mile powertrain warranty. Consumer Reports gave the Edge an “average” reliability rating for recent model years. Given the number of components that carry over to the 2019 model, that’s likely a reasonable predictor of future reliability.

Of the two Edge trim levels we test drove, we’d take the ST over the Titanium. If we were spending over $40,000 on a crossover from a mainstream brand, we’d rather have the ST’s powerful V6 than the milder four-cylinder engine of the Titanium. With features like the Sync 3 infotainment system, heated front seats, 20-inch wheels, a power liftgate, and B&O Play audio system, the ST isn’t exactly bare bones, either.

We would also spend $2,695 on the performance brake package, which adds 21-inch wheels, vented rotors, performance brake pads, upgraded brake cooling, and summer tires. If you’re going to drive a vehicle this big in anger, you need good brakes. The tires that come with this package also offer more grip than the standard all-season rubber, although you’ll want to invest in a good set of winter tires for year-round use.

The 2019 Ford Edge is a solid utility vehicle. Ford has done an impressive job updating an aging platform with new tech and, while it falls short of our expectations for the badge, the Edge ST offers a welcome dose of sportiness. This crossover was teetering on the edge of irrelevance, but Ford has brought it back from the brink.