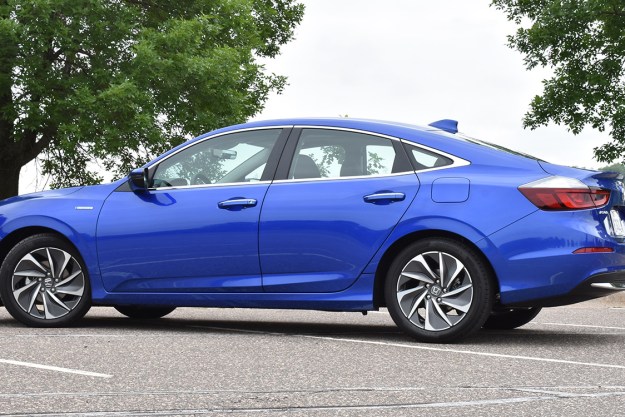 “The 2019 Honda Insight offers good gas mileage in a package that’s easy to live with.”

The Toyota Prius may have been the world’s first modern production hybrid, but Honda beat Toyota to the punch in the United States when it launched the first-generation Insight here in 1999. That quirky two-seater was more science experiment than practical car and it was followed by a forgettable second-generation model that more closely copied the best-selling Toyota. But now the Insight is back and better than ever.

This time around, the Insight is based on the Civic, but Honda insists that it’s more upscale than that economy model.  Honda is also downplaying the hybrid powertrain, claiming it wanted to build a nice sedan that just happens to be a hybrid. But with the Insight’s emphasis on fuel economy, other hybrids like the Prius and Hyundai Ioniq are its most likely rivals.

Honda offers the 2019 Insight in LX, EX, and Touring trim levels, with the base LX starting at $22,830. The LX gets standard Honda Sensing driver aids, LED headlights, and 16-inch alloy wheels as standard equipment. The EX adds an 8.0-inch Display Audio system with Apple CarPlay and Android Auto, Sirius XM and HD Radio compatibility, and remote engine start. We drove a top-of-the-line Touring, which starts at $28,090 and boasts features like leather seats, navigation, a moonroof, LED fog lights, and 17-inch wheels.

The Insight uses the same basic chassis as the Civic sedan, but Honda says only the roof and rear quarter panels are shared between the two. On the inside, the differences are less dramatic, though interior materials felt appreciably more upscale than those used in the Civic. Replacing the shifter with a series of buttons also made room for a tray big enough to accommodate an iPhone 8+, according to Honda. Two USB ports sit directly ahead for connectivity and charging.

Base LX models get a 7.0-inch Display Audio touchscreen infotainment system, while EX and Touring models get an 8.0-inch touchscreen. This is the newer Honda infotainment system shared with the 2018 Accord, and just as in that car, we appreciated the system’s blend of physical and touch controls, sensible menu layout, and fast processing. It’s easy to get acclimated to the Insight, which is not something that can be said of the Prius and its unusual dashboard layout. The only downside is that Apple CarPlay and Android Auto aren’t available on the base LX trim level.

The Insight shares its 106.3-inch wheelbase with the Civic sedan. While its 37.4 inches of rear legroom are fairly good for a small sedan, headroom was a bit restricted by the sloping roofline. Up front, space is comparable to that of the Prius and Ioniq. However, the Insight’s 15.1 cubic feet of trunk space (14.7 cubic feet in Touring models) is a bit less than that of the Toyota and Hyundai. That’s not surprising, given that the Insight is a sedan while the Prius and Ioniq are hatchbacks. The Insight does at least offer a folding rear seat on all trims (with a 60/40 split on EX and Touring models) to make the most of what space it has.

Interior materials did feel appreciably more upscale than those used in the Civic.

All Insight get the Honda Sensing suite of driver aids as standard equipment, including autonomous emergency braking, adaptive cruise control, lane keep assist and road departure mitigation, which watches outside lane markers to ensure the driver doesn’t veer off the road. Helpfully, Honda includes a screen in the standard 7.0-inch TFT gauge cluster that clearly shows which systems are active, as well as a traffic-sign recognition function that displays the local speed limit.

Other standard driver aids include a rearview camera, driver-attention monitor, and automatic high beams. EX and Touring models get Honda’s LaneWatch system, which displays images from cameras mounted on the exterior mirrors when the turn signals are activated so that drivers can more easily check their blind spots.

The Insight uses the latest version of Honda’s hybrid system, similar to the 2018 Accord Hybrid. However, the Insight uses a smaller, 1.5-liter Atkinson-cycle four-cylinder engine instead of the Accord’s 2.0-liter four. The system uses the gasoline engine primarily as a generator, with an electric motor providing the actual propulsion. In certain situations, the gasoline engine will drive the wheels directly and, like most modern-day hybrids, the Insight is capable of limited all-electric running.

The Honda hybrid system does not use a conventional transmission, and that became immediately apparent out on the road. The engine’s revving is often disengaged from the speed of the wheels, so sometimes the amount of noise doesn’t match the rate of forward momentum. The Insight had plenty of power for everyday driving situations, but the engine’s moan became a bit distracting at times. Switching the car into Sport mode (there are Normal and Econ modes as well) increased the noise without any discernible benefit to the driving experience.

Nonetheless, the Insight was nicer to drive than the Prius that Honda had on hand for comparison, with more responsive steering and less discernible body roll. The Insight also allows the driver to use paddle shifters to control the level of its regenerative braking, making the experience a bit more involving. Because they use low rolling resistance tires for efficiency’s sake, neither of these cars provides a sporty driving experience. But the Insight is the more entertaining of the two.

Insurance Institute for Highway Safety and National Highway Traffic Safety Administration crash-test ratings for the 2019 Honda Insight are not available at this time.

Honda has a rock-solid reputation for reliability, but should anything go wrong, the automaker offers a three-year, 36,000-mile basic warranty and five-year, 60,000-mile powertrain warranty.

While the base LX model offers a decent amount of tech features, including Honda Sensing and a 7.0-inch TFT gauge cluster, at its $22,830 starting price, the lack of Apple CarPlay and Android Auto means we would upgrade to the $24,060 EX model. Honda expects the EX to be the best-selling Insight trim, and we can see why. It also adds the 8.0-inch Display Audio system, remote engine start, LaneWatch, and a 60/40-split folding rear seat, making for a pretty complete package.

The Touring model does add more convenience features, including leather upholstery, power front seats, and dual-zone automatic climate control, as well as the HondaLink telematics service, but we feel the EX covers all of the essential tech bases. The EX is also about $4,000 cheaper than the Touring and is projected to get better fuel economy. That’s the one we’d have.

The Toyota Prius and Hyundai Ioniq never want you to forget that they’re hybrids, but the 2019 Honda Insight tries to be as normal as possible. It looks like a conventional sedan inside and out; the only indications of hybridness are the somewhat unusual driving experience, and lower fuel bills. There’s something to be said about this undercover hybrid. The Insight may not be able to match its rivals in overall fuel economy (although it comes close), but when it comes to everyday usability, Honda is the clear winner.