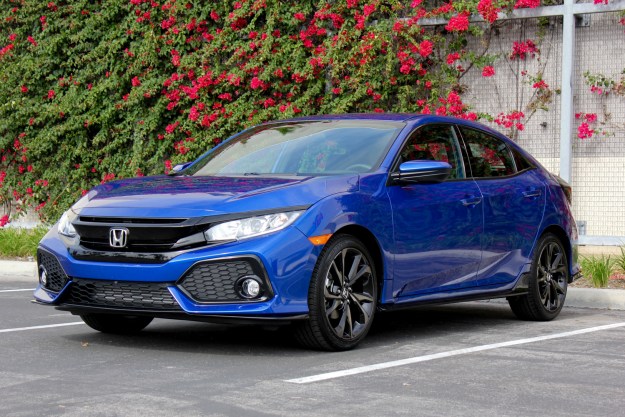 In late 2015, Honda introduced its 10th generation Civic sedan, followed soon after by a two-door coupe body style. With the arrival of the 2017 Civic Hatchback, Honda has filled its Civic lineup with variants aimed at sporty, stylish, and practical people.

In the 12 years since Honda sold its first Civic Hatchback in the U.S., Americans have renewed their love for rounded-rump compacts. Hatchback versions of the Ford Focus, Volkswagen Golf, Subaru Impreza, and Mazda 3 are now joined by the Chevrolet Cruze and Honda Civic, giving us plenty of options. Honda hopes to distinguish its offering with generous cargo capacity, spunky driving dynamics, eye-catching looks, and a killer value proposition.

The five-door body style will bookend Honda’s performance ambitions for its Civic nameplate; Honda will offer hotter “Si” versions of its coupe and sedan, but not the hatchback. Instead, the hatchback will serve as the foundation for a 315-horsepower Type R. Until the Si goes on sale later this year, however, the Civic Hatchback Sport is the spiciest version you can buy — indeed, it’s one if the best sedans you can buy period.

Honda hasn’t sold a Civic hatchback since 2005, when the Hatchback Si was discontinued due to weakening demand. Without a direct predecessor, the Civic Hatchback is technically 100-percent new, but shares a platform, styling cues, powertrain, and transmissions with its sedan and coupe counterparts. Unique to the five-door Civic is a Sport trim that includes unique wheel designs, greater engine output, and more aggressive design cues.

While each of the new Civic versions wear Honda’s dramatic design language well, we consider the Hatchback to be the most striking of the three. Our Hatchback Sport test vehicle, clad in Aegean Blue Metallic paint, is particularly fetching.

There are few curves to be found on the Civic Hatch’s body panels, giving the vehicle an imposing stance that will undoubtedly illicit strong opinions. It’s a risk on Honda’s part to go so bold, but we’re very glad the Japanese automaker took the leap. Our Sport tester falls on the audacious end of the spectrum, but you can tone down the trim.

Straight on, a blacked out grille is sandwiched between a pair of slender headlights and LED daytime running lights. At the front fascia’s lower flanks, two large air inlets (that are more artistic than functional) give the nose some menace. Black gloss trim acts as a sort of ground effects kit to make the Hatchback appear more hunkered.

The side view is dominated by 18-inch black wheels wrapped in Continental ContiProContact tires and a raked roofline that hits a flat panel at the rear instead of rounding like a traditional hatchback. We’re particularly enamored with Honda’s Sport wheel design, which makes the car look as if it’s in motion when stationary.

When you tire of making hot hatches sweat in a straight line, the Civic five-door will even keep pace in the corners.

At the rear, more non-functional venting panels sit below C-shaped LED taillights. The Civic Hatchback doubles up on both exhaust pipes and integrated spoilers. A roof-mounted wing and trunk (if you can call it that) spoiler sit above dual-exit exhaust ports for a decidedly boy-racer impression. If you have doubts about whether this is the “enthusiasts special” Civic, one look at the rear end will put your objections to rest.

Honda loves to streamline its trims to keep the options list minimal and the standard equipment ample.

Honda’s Civic Hatchback can be configured with bare essential convenience features or a spread of the latest and greatest technologies. If you choose the Sport trim, the focus is on style and performance rather than interior goodies.

The 5.0-inch color audio system on LX and Sport models is simple to use, but it’s also of lower resolution. Without Apple CarPlay and Android Auto, smartphone integration can only be accomplished via Bluetooth or a single USB port. Drivers enjoy a digital display embedded within the analog tachometer that shows speed, outside temperature, and telemetry data, plus steering wheel-mounted controls for music, cruise control, and a Bluetooth paired phone. In no way is the Civic Hatchback Sport behind the times, but it’s unfortunate that the coolest looking Civic can’t be had with the coolest tech.

On EX and above trims, infotainment gets a major upgrade via Honda’s 7.0-inch center display. The quick, responsive, and vivid interface is among the best in its class. Physical button redundancies for volume or song selection would be helpful, but the steering wheel controls help bridge the gap. The driver display also goes fully digital and can be customized to show navigation, audio, and smartphone information.

Through creative layering of stitched dashboard panels and eye-catching trim pieces, Honda makes even the most basic Civic cabin feel special. Sport trim models only gain two tactile niceties compared to the base LX model — leather wrapping on the steering wheel and shift knob — but considering your hands touch these surfaces more than any other, it makes a big difference. We also love the Civic’s seats. Honda lowered the front chairs to accommodate taller drivers, but riders of all heights will appreciate the ergonomic shape, supportive side bolsters, and comfort (in either fabric or leather cladding).

Though the Civic Hatchback’s sloping roofline suggests otherwise, there’s ample passenger and cargo volume. Five adult passengers can squeeze into the compact hatch (though four adults would be more comfortable). Rear passenger legroom and headroom is plenty for six-footers, but taller occupants may want to ride shotgun. A full car offers 26 cubic feet of luggage space (23 cu.ft. in Sport trims), and if you can ditch the rear riders, you’ll have 46 cu. ft. of storage with the back seats stowed. 60/40 split folding rear seats also give you versatility options.

Between you, us, and the wall, we’ve got a secret to tell: the Civic Hatchback Sport is the best-driving, non-performance five-door you can buy. What do we mean by non-performance? Vehicles like the VW Golf GTI, Ford Focus ST, and Mini Cooper S have been engineered to compete in a micro-segment all their own — we commonly refer to them as “hot hatches.” If Honda made a Civic Hatchback Si, it would play in this arena. However, since they don’t, the Hatchback Sport is simply a driving ace in a conservative segment.

We mentioned that Honda’s ludicrous Type R will ride on the same platform as the lowly Civic Hatchback, and that point is key to the Sport’s dynamic charms. With a stellar chassis and suspension, the Sport uses its 1.5-liter turbocharged four-cylinder with maximum effectiveness. All Civic Hatchbacks employ Honda’s new turbo motor (while coupe and sedan variants can be had with naturally aspirated mills), but only the Sport and Sport Touring bump output from 174 horsepower to 180.

Things become slightly convoluted you ask about torque and transmissions. If you’d prefer Honda’s Continuously Variable Transmission (CVT) in non-Sport Touring trim, you’re stuck with 162 pound-feet of torque. If you’d rather row your own gears, the LX six-speed makes 167 lb-ft of twist. Finally, Sport and Sport Touring variants produce 177 lb-ft of torque (but only the Sport is offered with a manual). Across the board, a CVT will cost an additional $800.

Our manual-equipped Sport tester hits the scales at 2,815 pounds and sprints to 60 mph in 6.5 seconds. For reference, the 210-horsepower VW Golf GTI and 252-horse Ford Focus ST accomplish the same sprint just 6/10ths of a second quicker. That’s astounding. When you tire of making hot hatches sweat in a straight line, the Civic five-door will even keep pace in the corners. Thanks in part to some 235-section tires (which are wide for the entry-compact segment), the Civic Hatchback Sport feels stable at nearly any cornering velocity.

If there’s one complaint we have with the Civic’s performance, it’s the gearbox. We enjoy the manual’s curt, smooth shifts, but find ourselves going nuts waiting for revs to fall between gearshifts.

Despite its propensity for speed, the Honda Civic Hatchback Sport still registers excellent fuel economy figures. The EPA estimates 30 mpg in the city, 39 mpg on the highway, and 33 combined. Under our best behavior, we even beat the combined figure.

Honda’s five-door Civic is one safe ride. With five-star ratings in front, side, and rollover crash tests, the NHTSA awarded the 2017 Civic Hatch with an overall five-star badge. Standard safety features on every Hatchback include stability control, antilock brakes, side airbags, side curtain airbags and a rearview camera.

Our perfect Honda Civic Hatchback looks just like our test model (which almost never happens). If you can live without Apple CarPlay and Android Auto, the Sport trim’s interior has plenty of style and utility. We also love the Sport’s aggressive design and thrilling powertrain. Best of all, its $21,300 starting figure is affordable for just about any new car shopper. Heck, we’d even choose the same exterior color — that Metallic Blue with those black painted wheels just pops.

We thought Honda nailed it with the introduction of its 10th generation sedan, but the five-door is a whole new level of compact car greatness. The Civic Hatchback Sport excels in fuel economy, performance, design, utility, and value. Add to that Honda’s legendary reliability and strong resale value for one rosy outlook.

Five-door compact car shoppers have plenty of vehicles to choose from, but Honda’s Civic Hatchback is the best of the bunch. Much as we love Mazda’s 3 Hatch, the Civic performs just as well, looks just as good, is quicker, and comes with more standard equipment. Hyundai’s Elantra GT is a value play at $18,800, but it can’t match the Civic’s build quality or design. Subaru’s new Impreza five-door boasts all-wheel drive, but isn’t nearly as engaging to drive. Some may be drawn to the Ford Focus for its sleek styling, but it fails to impress with cheap cabin materials. Even Chevrolet’s handsome new Cruze Hatchback falls short of the Civic with a lacking interior and woeful manual transmission.

Honda is among the most reliable automotive brands, and that means the 2017 Civic Hatchback Sport is built to last. Honda’s 10th generation Civic styling is just two years old, so unless you’re holding out for the Type R (at double the Sport’s price), there’s no reason to wait on updates.

We’d confidently recommend the 2017 Honda Civic Hatchback Sport to our friends and family (which includes you, dear readers), so schedule a test drive and experience one of our favorite cars on sale.