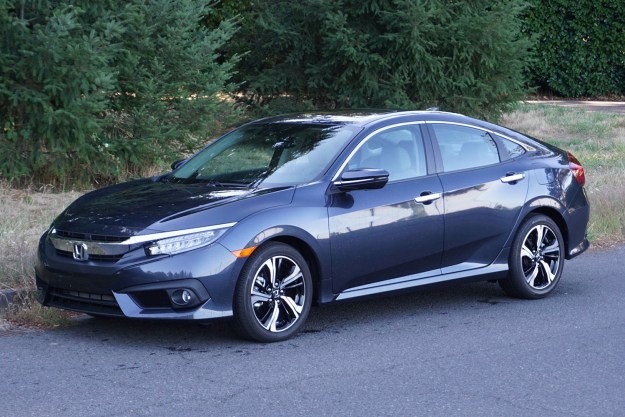 “In terms of value for your money, there’s no better choice on the market.”

Through ten generations, the Civic has been the car of choice for singles, young families, and empty nesters alike. Honda has been refining the Civic since 1972, well before most of this year’s Civic buyers were born.

Today, the Honda Civic is the fourth best-selling car in America, and the second in its class of compact cars. The only vehicles ahead of the Civic are the top-selling mid-size Toyota Camry and Honda Accord, and the top-selling compact Toyota Corolla. Honda moved 335,384 Civics in 2015, up 2.9% from 2014 levels. That kind of sales performance doesn’t happen by accident.

What makes the Civic so popular now, and what has made it popular for decades? Simply put, it’s value for the price. The Honda Civic has always delivered reliable and affordable transportation that is fun to drive and reasonably comfortable. If you want, there’s usually been a sporty version as well, with some models of the Civic ranking among the most popular sports cars of their era.

The Civic was completely redesigned for 2016, though most of the basic parameters stayed the same – the Civic will always be a compact, front-wheel-drive, economy car, available as a four-door sedan and two-door coupe. A hatchback version is on the books for 2017. Honda isn’t going to mess with success too much.

One change Honda did make is that the new generation Civic is larger than previous models, both inside and out. The 2016 Civic is 2.9 inches longer and 1.8 inches wider than the outgoing model. The new Civic’s interior dimensions are almost as big as the mid-size Accord. Headroom, legroom, shoulder and hip measurements are all within an inch or two of the bigger sibling. That gives the affordable Civic an advantage with buyers who are looking for a more spacious ride without the commensurate price hike.

Honda also updated the 2016 sedan bodywork to be more aggressive, with sportback four-door coupe styling reminiscent of an Audi A5. The coupe styling echoes the previous generation, but with a bit more panache than the plain-jane cars of the last 10 years. The goal was to give the Civic some of the attitude that it’s been missing, and where competitors like the Kia Forte, Hyundai Elantra, and Ford Focus have grabbed the initiative.

The 2016 Civic is available with two engines – a normally-aspirated 2.0-liter four-cylinder good for 158 horsepower and 138 pound-feet of torque, or a turbocharged and direct-injected 1.5-liter VTEC engine rated at 174 horsepower and 162 pound-feet of torque. The two-liter engine is available only on the two most basic trim levels, LX and EX. The higher EX-T, EX-L, and Touring models get the turbocharged engine, which is well-suited to the car and gives plenty of power where you need it.

Honda has been refining the Civic since 1972, well before most of this year’s Civic buyers were born.

The transmission story is mixed. Only on the most basic LX trim can you get a 6-speed manual transmission. All other Civics use some variation of continuously variable transmission. The lower trim levels get the basic M-CVT, while the higher trims with the turbo engines get the newer LL-CVT as used in the Accord. The LL-CVT gives the best driving experience of any CVT on the market, avoiding the high-revving, rubber-band-driven feeling endemic with other CVTs. But it would still be nice to have the option of a 6-speed manual transmission with the 1.5-liter turbo engine.

Sadly, it seems the days of the Honda Civic Si sports car may be gone for good, but observant performance fans will note that Honda has a 2.0-liter version of the turbo direct-injected VTEC engine that puts out 306 horsepower in the Type R currently available in a few world markets. Hopefully that car will make it to America in 2017.

Before we close the book on engine and drivetrain, let’s note that the Civic with manual transmission gets 27 mpg city and 40 mpg highway, and that bumps up to 31/41 with the M-CVT. The turbo cars get 31 mpg city and 42 mpg highway with the LL-CVT. All 2016 Civic models run on regular gasoline.

As a side note, the Civic Hybrid still exists, but it’s the last-generation 2015 model.

Honda has a pretty good technology story, but you’re going to want to visit the dealer and check out the Civic’s 7-inch touchscreen interface to see if it meets your needs. This is a somewhat polarizing feature, as it lacks any knobs at all. When I first got into the Civic, I went to turn up the radio and inadvertently set the heat to 88 degrees. Volume control is an area on the left of the screen, or (much more conveniently) on the steering wheel controls.

The Civic supports both Android Auto and Apple CarPlay, which are great features. You also get HondaLink smartphone integration, which comes with its own app for your phone. As you would expect, you also get Bluetooth and a USB port.

On the safety side, anything and everything the modern world has to offer is available on the Civic, but you might have to buy the top trim level to get it. The lane departure warning and lane-keeping assist, for example, is optional on all trims except the top Touring level, where it is standard.  It’s the same with the adaptive cruise control with low-speed following, the road departure mitigation system, and the forward collision warning and automatic collision mitigation braking system. All are standard with the Touring trim and optional on lower trims.

The exception is the Honda LaneWatch feature, which uses a camera on the right side mirror to put a picture of your right-hand blind spot on the display screen whenever the right turn signal is activated. This turns out to be a really excellent feature, and it’s standard on all trims above the most basic LX level. Once you get used to it, you’ll wonder why all cars from all manufacturers don’t have this feature. All 2016 Civic models get a standard multi-angle rearview camera, which is super useful.

With that in mind, there’s very little reason not to buy the Touring edition and get all the good stuff. You’ll enjoy navigation, all that safety gear, a better interior, heated front and rear seats, the top engine, a 450-watt stereo, and all the best goodies.

I had the Civic Sedan in the Touring trim for a week. That means I had the 1.5-liter turbo engine with the advanced CVT and all the goodies. On the road, the Civic is pleasant, with no bad manners and peppy performance. The car corners flat and rides smooth.

But having owned several Civics over the years, going back to a 1975 Civic wagon in college, the 2016 model seems to lack some of the eager impudence that made prior generations so great. Or maybe I’m the one who has lost the eager impudence, because there’s absolutely nothing in the 2016 Civic that I can point to and complain about. I certainly don’t miss the thumb-wrenching torque steer of my old ’75 wagon, nor the “I think I can, I think I can” passing technique of my old 1990 hatchback.

The final analysis on the 2016 Civic is that this car has everything it should have to attract today’s buyer. This car has respectable performance, adequate comfort, up-to-date tech, world-class safety, and we can expect it will have Honda reliability and longevity. With all that, there’s every reason to expect that the 2016 Honda Civic will stay at the top of the sales charts, and will probably take back the top spot.