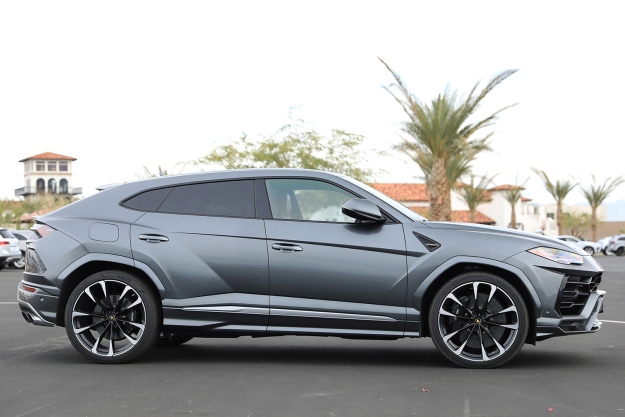 “The Urus is a jack of all trades that impresses on all fronts.”

Back in the late 1970s, Lamborghini embarked on a project unlike any other in the company’s history. In an unlikely move, the Italian sportscar manufacturer decided to try its hand at producing a light duty military vehicle similar to the AM General Humvee. Three prototypes – the Cheetah, the LM001, and LMA001 – were produced from the effort, but the rear-engined brutes never found favor with government buyers, and the project was eventually shelved.

Keen for a return on the investment, Lamborghini decided to change tack, taking the utilitarian chassis of the LMA001 and mating it to the V12 engine and five-speed gearbox from the Countach supercar to create the civilian-market LM002. Known colloquially as the “Rambo Lambo,” roughly 300 of these beasts produced in total between 1986 and 1993.

High performance SUVs were a bit of an anomaly back in the 1980s, but today they’re usurping sports sedans as the mainstream choice for those who want thrilling performance without foregoing practicality – a charge that was originally led by Porsche Cayenne in 2002.

In order to survive and continue to develop sports cars like the 911, Porsche theorized, they needed a vehicle that could connect with well-heeled mainstream buyers who needed a more versatile vehicle. Today the Cayenne and Macan out-sell all of Porsche’s other offerings. Combined.

That change in the wind hasn’t been lost on Lamborghini. While the company has enjoyed seven years of consecutive sales growth, the meteoric rise of sport-utility and crossover segments has become too big to ignore, so it has responded to the market with the all-new Urus.

Commanding a base price of $200,000 (or roughly $240,000 as-tested), the Urus brings a number of firsts to the table for the storied supercar firm. It’s a model that Lamborghini touts as “the world’s first super sport-utility,” and after stints behind the wheel on the street, at the track, and off the beaten path, we see little reason to argue with that assertion.

If the proportions of the Urus seem vaguely familiar to you, don’t worry, you’re not imagining things. Lamborghini’s new sport-utility is underpinned by Volkswagen’s MLBevo architecture, a platform that the Urus shares with the aforementioned Cayenne, along with the Audi Q7, Q8, Bentley Bentayga, and Volkswagen Touareg. The aesthetic, however, is a clear departure from its corporate siblings.

The angular design language of the Urus clearly draws inspiration from the Huracán and Aventador, highlighted by a sloping roofline and an aggressive front grille that make the Urus’ performance intentions clear. Striking from certain angles and a bit overwrought from others, one thing’s for sure – this SUV will stand out in a crowd.

Striking from certain angles and overwrought from others, one thing’s for sure – this SUV will stand out in a crowd.

Inside, the Urus finds Lamborghini venturing into new territory as well. This is, without question, the most luxurious cabin the Italian automaker has ever produced, emphasizing comfort, ultra-high-end materials, and premium technology. “Our engineers were tasked with bringing together two worlds that are, shall we say, a bit distant from one another,” explained Alessandro Farmeschi, chief executive officer of Lamborghini of the Americas. “Being that this is an SUV, it must be comfortable, and it must be versatile.”

To that end the five-passenger Urus is designed to accommodate passengers up to 6’7” up front, while the rear seats provide headroom for folks up to 6’3”. The 22 cubic-feet of cargo volume behind the rear seats is enough space to stow two sets of golf clubs, Farmeschi points out.

Adding to the cabin’s sense of luxury is an all-new infotainment system that’s a massive leap forward from the tech found elsewhere in the Lamborghini portfolio. The appropriately-named Lamborghini Infotainment System III consists of a pair of touchscreen displays in the center stack: The upper display manages media, navigation, and other related tasks, while the lower display is used for things like climate control adjustment, providing haptic feedback to allow for easier adjustments on the go.

The Urus also provides SAE-rated level two autonomy with standard driver assistance tech like adaptive cruise control, automatic emergency braking, high beam assist, and parking sensors at the front and rear of the vehicle, while other features like a top-view camera and a trailer coupling mode are optional.

The first three focus on the on-road capability of the Urus: Strada (street in Italian) serves as the default drive mode for the vehicle while Sport lowers the suspension and perks up the gearbox. Corsa (Italian for race) takes the concept several steps further, dialing the transmission, suspension, exhaust system, and other on-road performance parameters to their most aggressive track settings.

This is, without question, the most luxurious cabin Lamborghini has ever produced.

Sabbia (sand), Terra (terrain), and Neve (snow) all center around the off-road capability of the Urus, raising the vehicle’s ride height and adjusting the transmission and traction control, and other parameters according to the conditions. In another first for Lamborghini, the Urus also boasts an active roll bar system that adjusts the amount of body motions experienced in those different drive modes, a system which can also decouple the bars from the rest of the suspension system for better wheel articulation while venturing off-road.

As with the Aventador, Ego mode serves as a user-defined preset, allowing the driver to pick all of their preferred settings from the various modes and combine them into one.

With a 650 horsepower twin-turbocharged V8 nestled under its hood and a suspension system that’s been designed to perform at the race track as well as in the dirt, you might expect the Urus to be a bit of a handful during everyday driving. Truth be told, the Urus is a mellow steed when set to Strada, with soft dampers that effectively soak up the imperfections in the road and relaxed behavior from the ZF eight-speed automatic.

Dial the drive mode up to Sport and the Urus hunkers down noticeably, the transmission drops down a few cogs, and the exhaust lets out a bit more of its snarl. Tighter and more responsive without being abusive, Sport proved to be our preferred mode during our street drive, though Strada certain has its virtues when you want to fly under the radar.

Our street drive led us out to the off-road exercises, which followed along part of the San Andreas fault line outside of Palm Springs. The testers on hand for these exercises were shod with the optional Pirelli Scorpion all-terrain tires for the task, and after clicking down to Sabbia on the Tamburo, we set off for a tight, low-speed off-road course. Here the Urus’ four-wheel steering came into play. Like the latest Aventador models, the rear wheels of the Urus turn in the opposite direction of the front wheels during low-speed maneuvering, effectively reducing the vehicle’s wheelbase to allow the big sport-utility to handle like a smaller machine. At higher speeds the rear wheels turn in phase with the fronts to enhance stability.

After trekking through the brush we were instructed to bump the drive mode selector into Terra. “The speed is going to pick up significantly, so be ready,” warned our guide in the lead car just before he vanished into a cloud of dirt. We dropped the hammer and followed suit.

While the Urus is no Wrangler Rubicon in the rough stuff, it definitely impresses at pace. Through a combination of sophisticated stability software, trick suspension, and sheer horsepower, we simply brutalized the course with Raptor-like abandon, gleefully throwing in opposite lock as the tires scrambled for traction. Simply put, the Urus holds its own where the pavement ends.

But it’s the South Course at The Thermal Club private track facility where the Urus impressed us the most. We had an inkling of what to expect when Farmeschi noted that the Urus out-paces the Gallardo in just about every performance metric (aside from top speed), but this 4900-pound SUV still exceeded expectation.

Although the relatively high center of gravity will never let one forget that the Urus is, at its core, a sport-utility vehicle, the capability on tap is impressive. Ten-piston calipers clamp down on 17.3-inch carbon ceramic discs up front as standard, and that provides the serious stopping power needed to match the straight line acceleration that this boosted V8 can generate.

And yet somehow the Urus can handle as well – clever torque vectoring allows you to get on the power earlier than you expect coming out of a corner without being greeted by a terminal case of understeer, while the four-wheel steering makes the big machine surprising eager to change direction. This is an SUV you’ll actually want to drive on a road course.

The Urus’ main competition comes from a pair of its corporate siblings – the Porsche Cayenne Turbo S and Bentley Bentayga. While the Cayenne costs roughly $40,000 less, the Urus has the edge in outright capability, and the Porsche is far more likely to be lost in a shopping mall parking lot.

The Bentayga takes a more earnest approach at providing a luxury experience, but you’ll need to pay at least another $30,000 if you want a full-fat 12-cylinder model, and the Bentley is significantly outclassed by the Urus when it comes to performance capability.

Lamborghinis have never been about subtlety, so we’d have ours painted in a lovely Rosso Anteros red to help drive that point home.

The Urus marks a significant milestone in the story of Lamborghini. While it may not be the type of vehicle we’ve grown accustomed to seeing from the automaker, it is indeed a stunning performance machine that is worthy of the badge.

Lamborghini says it hopes the Urus will help it double its sales overall. We see no reason to doubt that it will do just that.