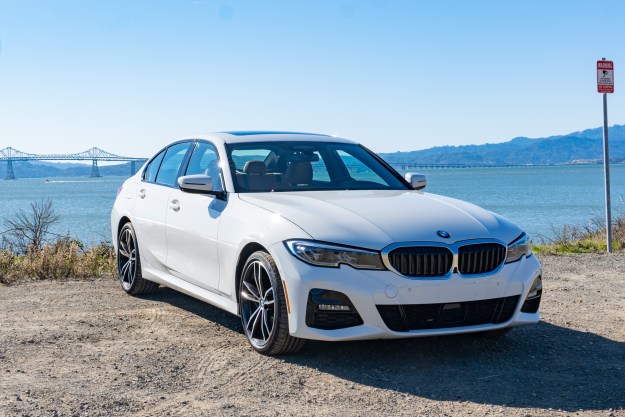 “It's not the most efficient PHEV on the road, but BMW's 330e stays true to its sport sedan roots.”

Between the thunderous glory of BMW’s M2 CS and the technological wonder that is the i4 sits the BMW 330e. It’s a vehicle with its tires in two worlds, merging the automaker’s decades of internal-combustion expertise with the electrification efforts of the modern version of the company that brought us the i8 and i3.

The 2021 BMW 330e doesn’t telegraph its efficient plug-in hybrid (PHEV) underpinnings. Beyond the tiny “e” tacked on its badge and charging port door, from the outside, it’s just a midsized German luxury sedan. On the road, though, the combination of drivetrains makes for a most interesting and sometimes fun experience. But it also introduces some odd behavior that you wouldn’t expect from the automaker.

Available in two drivetrain flavors, the rear-wheel-drive 330e starting at $42,950 and the all-wheel-drive 330e xDrive starting at $44,950, the German sedan’s electric motor and battery afford it a tax credit of $5,836. That’s a pretty good chunk of change, and additional local and state incentives can send it higher, depending on where you live.

Even with the bare minimum incentives, new owners could roll out the door with a hybrid drivetrain for less than the cost of the regular 330i, which starts at $41,450 in rear-wheel drive.

The BMW 330e spends most of its time in hybrid mode, switching between gas and electric power as it sees fit in order to deliver an MPGe of 75. Behind the wheel, the vehicle delivers the 3 Series experience: Solid acceleration (zero to 60 in 5.6 seconds), luxury suspension that can be tightened for those backroad moments, and precision steering. But it’s not without its issues.

In hybrid mode, the 330e would sometimes accelerate quicker than we anticipated. Instead of a gradual application of power away from a green light, the 330e sometimes delivered a jolt violent enough to smack your head against the seat. Surprise! That did not impress our passengers. It wasn’t an everyday occurrence, and it never felt like it was a dangerous (the car would right itself immediately after the burst), but it happened about three times during our week with the vehicle.

This quirk nearly soured an overall pleasant driving experience with the 330e. On the highway, it’s a wonderful cruiser with plenty of room for four adults (five if those in the back seat don’t mind getting cozy). As with all PHEVs, while cruising at 70 miles per hour, the battery pack’s state of charge depletes quickly. At that point, the vehicle has an Environmental Protection Agency (EPA) combined rating of 28 MPG.

Toss it in Sport mode, and while it’s no M car, it does enhance that experience for some backroad fun. Tight steering combined with the rear-wheel-drive drivetrain of our test model made for some lightly spirited driving. A hybrid boost in Sport mode gives the vehicle a little extra kick in the pants out of the corners and during takeoff while the turbos spin up. The additional weight of the electric motor and battery are apparent and require a slightly stiffer suspension, but the ride adjustment and bulk only place a small damper on the festivities of the sporty sedan.

For the daily commuter looking to reduce their impact on the planet, the EV-only mode is a great preview of what an all-electric 3 Series will be like. In a world where the Toyota Rav4 Prime posts 42-miles of range, the 330e’s 20 miles of range from a 12.0 kWh capacity battery pack feels disappointing. Still, even if a person had a 40-ish mile commute, half of it could be powered by electrons in a luxury sedan. During our mixed driving tests (highway at 70 mph and surface streets), the 330e posted 19.8 miles of range. That’s with us flooring it to get up to highway speed from an onramp with an EV-only mode top speed of 87 miles per hour.

Extended Traffic Jam assistance adds an extra bit of comfort to the horrors of gridlock.

While it falls short of Toyota’s more efficient powertrain, the 330e really shines in its attention to luxury and technology. The interior includes the requisite comfortable yet embracing seats. It’s an appropriate mix of making sure you feel secure around hard corners without sacrificing the driver’s need to feel pampered.

The rear seats should keep passengers happy on long road trips, though legroom can be tight for those taller than six feet. Behind the seats, the trunk has ​​13.2 cubic feet of space, enough for a few large suitcases, a small cooler, and a duffle bag. In other words, you won’t be hurting for space on weekend jaunts. The space is slightly larger than with the Audi A4 and Mercedes C-Class, which have 13 cubic feet and 12.6 cubic feet of space, respectively.

The overall interior materials are high quality, with both controls and the 10.25-inch touchscreen slightly tilted toward the driver. BMW’s iDrive 7 infotainment system can be controlled either by the touchscreen or the rotary controller in the center console. The system has been around for a few years, but still delivers an easy-to-navigate framework which includes multiple customizable home screens that allow the driver to set the vehicle’s controls to their liking.

The system showed very little to no latency while using it either with our fingers or via the rotary dial. Most of the more important features were available with two taps, and even Apple CarPlay was just a tap away from the home screens thanks to a dedicated (but tiny) tappable icon located along the top of the screen. Sadly, Android Auto support is not available in the vehicle.

For fans of tangible buttons, climate controls are still actual physical buttons that reside below the touchscreen. BMW also offers a series of hotkeys that can be programmed by the driver. They’re joined by a real-life volume knob, one of the few left in the luxury automobile space. Like an animal on the endangered species list, we should do all we can to make sure that it returns in larger numbers to its natural habitat before they’re all replaced by sliders, buttons, and touchscreen controls.

While there is a tendency to only review the most exciting features of a vehicle on the open road devoid of other drivers and traffic, the reality is most cars will spend more time stuck motionless on the highway than speeding along on pristine asphalt in the middle of the desert.

BMW understands this, as evidenced by its impressive hands-free, low-speed driver’s assistance system, called Extended Traffic Jam assistance. The system works like GM’s Super Cruise, but at low speeds on the highway. While on a highway with clear road markings and while traveling below 40 miles per hour, the system will allow the driver to remove their hands from the wheel. The driver still needs to pay attention to the road and is being monitored by an in-dash sensor, but it adds an extra bit of comfort to the horrors of gridlock.

The $1,700 option might be worth it to those who spend a lot of time behind the wheel traveling at very low speeds on the highway. During our tests, the system did a commendable job tracking vehicles, adjusting its acceleration, and braking during cut-ins and when other cars got out of the lane. There were no moments when the 330e sped up too quickly for comfort when the road opened up for us. Also, braking was done in a controlled way that was never a cause for concern.

Standard safety features include front collision warning, lane departure warning, and city collision mitigation and braking. The 2021 BMW 3 Series is an Insurance Institute for Highway Safety (IIHS) Top Safety Pick. The 3 Series is also a five-star safety rating from the National Highway Traffic Safety Administration (NHTSA) but the 330e variant hasn’t been tested as of the time of this review’s publication. While we don’t anticipate the PHEV version of the vehicle to stray too far from the overall 3 Series rating, the extra weight of the battery and electric motor could be enough of a variable to affect the vehicle’s ratings.

While the review vehicle was rear-wheel drive, we’d opt for the all-wheel-drive Xdrive version of the 330e for additional peace of mind in inclement climates. We’d also throw in the $1,700 driver assistance pro package for the hands-free traffic jam system, and the $1,400 dynamic handling package that includes adaptive M suspension, sports steering, and blue caliper sport brakes.

Outside of a few instances of jarring acceleration from a standstill, the 330e proves itself to be a vehicle worthy of the 3 Series legacy. If you’re not looking for the more powerful M models, it’s the 3 Series that belongs in your garage. Its combination of efficiency and midsized sedan sporty driving make it not so much a compromise, but a great transition vehicle for those looking for an electrified BMW experience, but who are not quite ready to pull the trigger on the all-electric BMW i4.

The comfortable interior includes all the luxury touches you’d expect from a German automaker. The infotainment system isn’t the latest from BMW, but it offers up an easy-to-navigate touchscreen that surfaces important information in multiple customizable home screens so what the driver is looking for is only a few taps away. Apple’s CarPlay support is standard, but Android Auto users are left out.

Efficiency might not be on par with offerings from Toyota or other automakers, but the 20 miles of EV-only range are part of a larger luxury package that makes the 2021 BMW 330e more than the sum of its parts.

Yes. The BMW 330e is a fusion of what people love about BMW: German sports luxury combined with a plug-in hybrid drivetrain that will deliver better efficiency in nearly all driving environments.