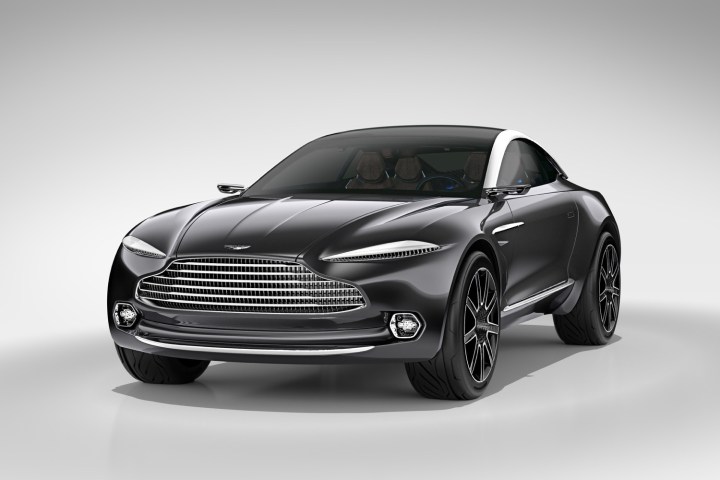 Aston Martin has nixed plans to offer an all-electric powertrain in its first production SUV. The model was previewed by the all-electric DBX concept, which debuted at the 2015 Geneva Motor Show. But in an interview with Automotive News, Aston Martin CEO Andy Palmer said the SUV will be offered with gasoline engines only, ruling out diesel and plug-in hybrid versions as well.

While fellow British automaker Bentley offers a diesel version of its Bentayga SUV in Europe, Palmer said he believes “diesel’s life is limited.” He said plug-in hybrid powertrains are a “convenient stepping stone,” but the extra weight and cost make them undesirable for Aston. A conventional hybrid powertrain may be a possibility for the SUV, though, as Palmer has discussed offering an electrified variant of every Aston model.

The SUV is expected to enter production in 2019. It will be built at a new factory in Wales, which occupies the site of a former military base. With an all-electric option off the table, Aston will likely stick its 5.2-liter twin-turbocharged V8 or the 4.0-liter twin-turbo V8 it borrows from Mercedes-AMG under the SUV’s hood. When it arrives, the Aston will compete against a growing crop of high-end SUVs, including the Bentayga, Rolls-Royce’s upcoming Cullinan, and the Lamborghini Urus.

The all-electric powertrain may not be the only element of the DBX concept that won’t make it to production. Instead of DBX, the production model may be named Varekai, in keeping with Aston’s habit of using names that begin with “V” for most models. The “DB” prefix (the initials of postwar Aston patron David Brown) is usually reserved for the automaker’s core sports-car model, currently the DB11.

Aston isn’t giving up on electric cars. The automaker still plans to build an all-electric version of the Rapide — called RapidE — in limited numbers. It will follow that up with an electric car for its Lagonda sub-brand. Aston unveiled a Lagonda sedan concept called the Vision at the 2018 Geneva Motor Show, as well as a scale model of a possible Lagonda SUV. Lagonda started out as a separate company but was merged with Aston Martin in 1947. Aston has applied the Lagonda name sporadically to big luxury sedans.