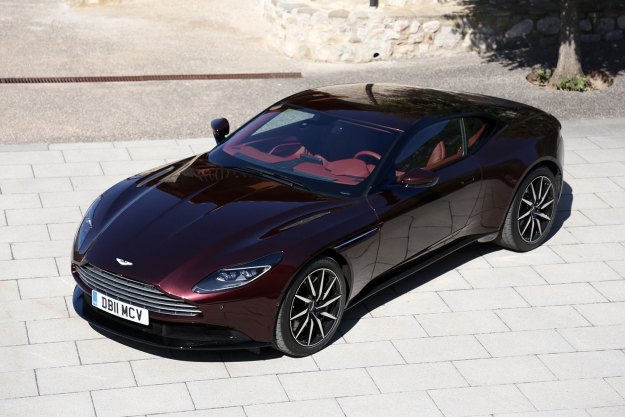 In April of this year, Aston Martin entered the second phase of its most ambitious proposal ever. The “Second Century Plan,” spearheaded by CEO Andy Palmer, is an intricate solution to a simple problem: in 104 years of operation (yielding over 80,000 vehicles), Aston Martin has never been profitable.

Consumed with handcrafting some of the world’s most elegant cars, Aston Martin didn’t concern itself with empirical success. The Palmer era is different. Rallying under the banner, “for the love of beautiful,” the new Aston still treasures aesthetics, but now frames every action within a financial goal.

By 2021, Aston Martin will have a seven-vehicle lineup and hopes to move 14,000 units per year. Importantly, the company has already applied 75-percent of the $650 million raised to complete its plan. In other words, sales of the first four models (DB11, Vantage, Vanquish, and DBX) must fund the next three. No more operational loss.

Will it all pan out? Looks that way. In just over a year, 2,500 DB11 models have been built and sold, revenue year-over-year is up 94 percent, the company is entering its third quarter of profitability, and DB11 production quality is up 100 percent from the DB9.

To maintain momentum, Aston Martin is doubling down on its DB11. An entry-level, V8-powered derivative lowers the barrier to entry and (in theory) changes the Grand Touring (GT) car’s personality. But enough projecting and pontificating – it’s time to see if the 2018 Aston Martin DB11 V8 is more than just an engine swap.

Visual distinctions between the V8 and V12 models are few. In contrast to the range-topping DB11, the V8 features smoked headlights and taillights, a lack of center venting on the hood, a black plastic grille, and the words “Aston Martin” spelled out on the bootlid (that’s the trunk, for us Yanks). Responding to feedback from consumers, Aston Martin added a foot-activated trunk release and chose more homogenous interior trim.

These tweaks pale in comparison to the mechanical updates, however. Under the hood is a Mercedes-AMG-sourced twin-turbocharged V8 engine, uniquely tuned by Aston Martin. In addition to the lighter motor, the DB11 V8 is stiffer than its V12 counterpart. The UK automaker considers the V8 and V12 to be sporty and comfortable (respectively) bookends to the GT spectrum.

It’s been a full year since we last beheld the DB11 – plenty of time for our initial enchantment to fade. Yet it hasn’t. If anything, we’re more attracted to the car’s bodacious hips, curly-cue side ducts, floating roof, and endless hood.

The DB9 is finally at rest, and Aston Martin’s future is sheathed within the DB11’s modern mold.

It takes a keen eye to spot differences, but we prefer the V8’s darkened exterior trim to the chrome touches adorning the V12. Fewer standout cues permit the DB11’s cohesive design language to shine. In particular, 20-inch, 10-spoke wheels in a variety of cuts and styles perfectly match the GT’s sculpted body, ‘light blade’ tail lamps, and purse-lipped grille.

Perhaps it was the obliged comparison between DB11 and DB9 – a design challenge no sports car would take on willingly – that checked our enthusiasm last year. With the DB9 now put to rest, Aston Martin’s future is sheathed within the DB11’s modern mold.

At $198,995, the V8-powered DB11 is priced $17,500 beneath the V12. Aston Martin expects flagship to outsell entry-level at two cars to one here in the U.S. – unsurprising given the relatively small price delta. Packaging is similar between V8 and V12 versions, though some colors and options are exclusive to each.

Like the V12 version, the DB11 V8 utilizes Mercedes-Benz’s electronic architecture for its infotainment and driver interface. Unlike our growing admiration for the DB11’s physique, however, we’re less impressed with the interior tech this time around.

The perfection of man-made imperfection is either desirous or counterintuitive.

As Aston Martin’s finicky AMI III module fades from memory and Mercedes-Benz rolls out its latest generation COMMAND system to more products, the DB11’s older system underwhelms. A clear, responsive 8.0-inch display is restrained by a confusing menu structure, lack of touch-sensitive controls, and missing Apple CarPlay or Android Auto interface. Meanwhile, the center stack relies disproportionately on touch controls (that often need to be jabbed more than once to take action).

Fortunately, the digital driver display claws back some cool. A pair of reconfigurable TFT screens sandwich a prominent speedometer/tachometer display within a brushed metal surround. Elegant when the vehicle is turned off and stimulating when switched on, the effect mirrors the DB11’s curb appeal.

“If you have to ask, then you can’t afford it.” Those words, usually uttered by some snickering humbug, cause us all to cringe. Alas, when it comes to a car like the DB11, the phrase has some grain of truth. Those who question the premium for a handcrafted car are likely not the intended buyers. The perfection of man-made imperfection is either desirous or counterintuitive.

Inside, the DB11 is a work of hand-stitched, hand-sown, and hand-laid passion. It’s easy to get lost in the leather-dense layout, appreciating soft textured surfaces and tracing the contrast-stitched pattern on each seat. Anything not coated in manicured cowhide is constructed from brushed metal or high quality plastic. Of the vast array of cabin colors, deep purple is the most magnetic. Juxtaposed with a Stratus White exterior, the DB11 straddles the line between sleek and sensational.

Though Aston dubs its DB11 a 2+2, we refuse to recreate last year’s contortionist exam. Thankfully, supple, supportive front seats keep us fresh during our 250-mile dance through the winding roads of Catalonia, Spain. More than ever, it’s the driver’s seat we crave.

Typically, Grand Tourers pair a robust powertrain with soft suspension damping for long-haul comfort. Indeed, the DB11 V12 – while dominant in a straight line – eases through corners rather than carving them. Aston Martin has a different vision for the V8. With a lighter motor and stiffer setup, the entry-spec DB11 now teeters between sports car and GT.

The DB11 V8 is the essence of urgency – whatever the roadway blueprint.

To transform the DB11’s performance attributes, the luxury manufacturer starts with Mercedes-AMG’s 4.0-liter twin-turbocharged V8. Though a brilliant engine, it needs “Astonizing,” (to borrow a phrase from Chief Engineer Matt Becker). Powertrain modifications include a unique air intake system, wet sump, ECU, and exhaust system to make the car feel and sound distinct from an AMG product. These adjustments yield 503 horsepower and 513 pound-feet of torque, 97hp and 3 lb-ft less than the V12. Aston says the V8 will hit 60 mph in 4.0 seconds and VMAX at 187 mph; we reckon it’s a tad quicker, but infringing on the V12’s authority is a no-no.

Predictably, removing 253 pounds from the DB11’s nose morphs its driving dynamics. With a new weight ratio of 49:51 (V12 models are 51:49), the V8 requires a little less brake up front and a little more tightening in the rear. Specifically, new rear subframe bushings stiffen the car by over 5 percent vertically and reduce body roll. More rigid engine mounts, revised dampers, shorter shift paddle travel, and recalibrated drive modes round out the list of performance tweaks.

On the road, the DB11 V8 is unrecognizable as an offspring of the twelve-cylinder GT. More responsive, agile, and communicative, the V8 lusts for back roads and rewards driving precision. If there’s a single characteristic shared with the V12, it’s smoothness; transitions between corners and stability at speed are marques of a world-class chassis. Complimented by a broad torque-band, the DB11 V8 is the essence of urgency – whatever the roadway blueprint.

We had this one pegged; the DB11 V8 was to be a union of two familiar inputs for a predictable result. Somehow, however, A (Mercedes-AMG V8) + B (DB11 beauty) = R (segment revolution). The DB11 V8 widens the grand touring spectrum like never before, and not just for Aston Martin. GT competitors now risk being measured on the DB11’s sliding scale with little hope for category redefinition. That’s one market cornered, Aston – only six remain.