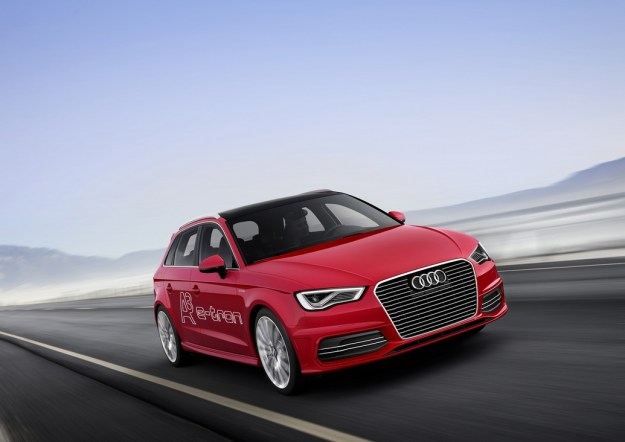 Audi took the wraps off its A3 e-tron concept, which is set to debut at the Geneva Motor Show next month. While the last e-tron was a pure electric car, this new model will be a plug-in hybrid.

Under the hood is a modified version of the stock A3 Sportback’s 1.4-liter four-cylinder engine and 75-kilowatt electric motor that is integrated into the car’s six-speed automatic transmission. Audi calls the new motor-transmission hybrid e-S tronic.

Total system output is 204 horsepower and 258 pound-feet of torque. A United States-spec 2012 A3 with the base 2.0-liter turbocharged four-cylinder makes 200 hp and 207 lb-ft, so the plug-in e-tron won’t penalize drivers on the power front.

Unlike most Audis, the A3 e-tron does without quattro all-wheel drive, going for front-wheel drive instead. Drivers can choose whether gasoline power, electric power, or a combination of both goes to those front wheels through programmable settings.

Visually, there isn’t much to distinguish the e-tron from a normal A3 Sportback, which is probably why Audi put a giant “A3 e-tron” sticker on the side.

The A3 e-tron can drive up to 31 miles on electricity, besting the Ford Fusion Energi’s 20-mile electric-only range. It can also drive at speeds up to 80 mph in electric mode, which should come in handy on Germany’s autobahns.

Audi says the A3 e-tron will return 156 mpg on the European cycle, if driven conservatively, while emitting just 35 grams of CO2 per kilometer.

So far, the A3 e-tron is just a concept car, and it’s unclear what Audi has planned for it. The previous, all-electric e-tron was used as a testbed and was never put into mass production. We’ll learn more when this plug-in hybrid hatchback makes its official debut at the Geneva Motor Show during the first week of March.