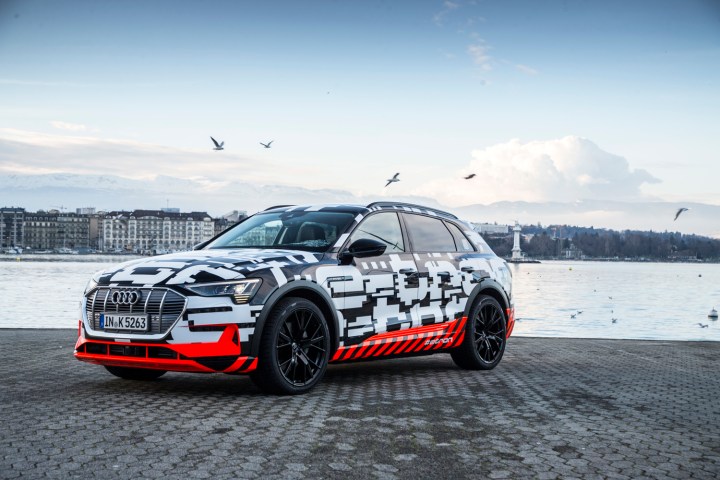 It hasn’t been a good week for Audi. Rupert Stadler, the automaker’s CEO, was arrested last week in connection with an investigation into Audi and parent Volkswagen’s diesel-emissions cheating. Now Audi is postponing the launch of its Tesla-fighting e-tron electric SUV.

The e-tron was scheduled to be unveiled August 30 at an event in Brussels, Belgium, where the SUV will also be built. Journalists received invitations to this event, which Audi calls a “summit.” But on Monday, June 25, Audi said the e-tron unveiling will now take place in the United States at an unspecified date.

“The Summit will now take place on a later occasion in the U.S.,” an Audi spokesperson said in an email obtained by Digital Trends confirming the cancellation of the Brussels event. The automaker told Automotive News that “organizational reasons” were behind the delay and shift in venue.

The announcement marks another recent setback for Audi. Stadler was arrested last week in connection with the ongoing diesel-emissions scandal. German prosecutors were reportedly concerned that Stadler would suppress evidence into an investigation of Volkswagen’s use of “defeat device” software to cheat on emissions tests. Audi did not specifically mention Stadler’s arrest as a reason behind the delay of the e-tron unveiling. Audi plans to launch additional all-electric models over the next few years, as part of a major electrification push by parent VW.

The delay means rival Mercedes-Benz will likely be the first German luxury automaker to unveil a long-range, mass-market electric car. Mercedes is scheduled to unveil its EQC electric SUV in Stockholm, Sweden, on September 4. Traditional luxury automakers are making a concerted effort to fight Tesla with electric vehicles like the e-tron, EQC, Jaguar’s recently launched I-Pace, and the upcoming Porsche Taycan (nee Mission E). Audi may still beat Mercedes to showrooms, however.

“The e-tron will have its market launch at the end of the year. Nothing has changed,” an Audi spokeswoman told Automotive News. Mercedes has said the EQC will go on sale next year, but hasn’t given a specific date. Audi is taking reservations for e-tron, which will start at 80,000 euros ($93,000) in Germany, in some European countries. In May, Audi said it had received 5,500 reservations from Norway and the Netherlands — two countries known for electric-car enthusiasm.