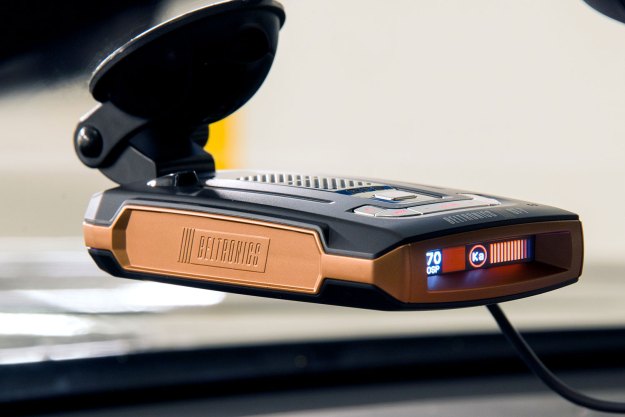 “Beltronic’s brilliant GT-7 helps you dodge your next ticket without constantly squawking and distraction.”

Take a car made prior to the ’90s up past 55 MPH, and you would half expect the wheels to fall off and the whole car to shake apart. But today, even base-level economy vehicles are peaceful enough for a passenger to needlepoint while cruising upwards of 80 MPH, provided the law doesn’t mind.

Thankfully, Beltronics has packed the GT-7 with the latest radar detection to help keep you alert to any red-light cameras, speed traps, or highway patrol headed your way. Because an expensive ticket is a quick way to ruin your long family trip — and could certainly spoil your needlepointing.

If you have a lead foot, it may end up paying for itself rather quickly.

Taking the GT-7 out for its first spin is a “plug and play” experience: Simply mount the detector to the windshield, slide the unit onto the detachable magnetic bracket, and connect it to a cigarette lighter with the included SmartCord. A normal Micro USB cord will also power the device, but the SmartCord includes indicator LEDs to alert you of detections, and a mute button to silence the alerts. Add the $99 Escort Live SmartCord, and the GT-7 becomes compatible with the Escort Live App. The cord, mount, and device fit into a very nice carrying case that is included in the package.

The Beltronics GT-7 features three different driving modes: Highway, Auto, and Auto No X. On the “Highway” mode, the detector will look for all radar bands at the maximum distance possible. The “Auto” setting will adjust the alerts based on the type of signals it is receiving as you drive and automatically adjust the sensitivity. “Auto No X” is the same as the automatic mode, but completely blocks out any X-band signal alerts.

To explain the differences in bands, all you really need to know is that X band is the oldest and was replaced by the K band around 1976. The Ka band is the most recent technology, and these type of alerts are almost certainly a police vehicle. The Beltronics literature mentions that you should be absolutely sure your local authorities do not use the older X band before relying on the “Auto No X” mode.

I initially tested the GT-7 for about 200 miles on my weekly commute into Los Angeles. For the first portion of the tests, I used the “Highway” mode and found that slow traffic and busy cities would give false alerts. Various highway, construction, and even commercial truck sensors would set off the X and K band alerts in traffic. Switching to the “Auto No X” mode seemed to be the best at giving only positive alerts in heavy traffic.

As I continued to use the GT-7 on my morning drive I would find areas that always set off the detector, and begin to block them out by pressing the “Mute” button 3 times on the SmartCord. With it plugged in just below the radio controls, I was easily able to control the device without needing to reach up to the unit in the window each time. After locking a location, I would notice a greyed-out alert the next day when passing by, and the vocal alarms would not sound.

In heavy traffic within the city, I noticed that many times the Highway Patrol would pass by my vehicle without any alert. Your mileage may vary, but in heavy traffic and around town, the red-light camera and speed-trap alerts were the most helpful features. I only saw a few speed signs, and two cops actually using radar to catch speeders, and the unit gave strong Ka band alerts each time.

Breaking away from the city, I was able to get out on open to test the Highway mode for another 200-mile trip out of town. The “Grapevine” portion of California’s Highway 5 is notorious for cops waiting to catch folks speeding down the mountain. They did not disappoint , and neither did the GT-7. It yelped out a nice Ka band alert as we began to swiftly accelerate down the grade. The alert came nearly one mile before we reached the highway patrol, and by then we had slowed enough to roll by unmolested.

The Beltronics GT-7 is also equipped with helpful “Over-Speed” alerts to let you know once you have passed a set speed. The default setting is 70MPH, and I found it perfect to give you a vocal nudge to stay within the posted limits, or keep an eye out when you exceed them.

The $499 for the Beltronics GT-7 is certainly towards the higher end of the price spectrum, but if you have a lead foot, it may end up paying for itself rather quickly. Just over the couple weeks we tested the device, there were a half-dozen instances where I could have received a ticket had I not been alerted of an upcoming radar.

The reported average increase in car insurance for just one ticket on your record is $900 over three years. I can personally vouch that it is often much more than that amount. After my tickets in the past, I would drive in fear while cruising around 75 to 80 MPH with the flow of traffic on long drives. The GT-7 gives the proper information and alerts to remove most of that highway fear, and let you focus on driving.