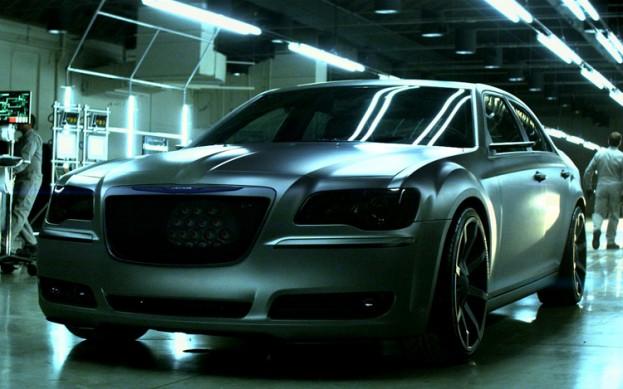 Chrysler’s “Imported from Detroit” campaign helped make company’s cars and Detroit itself look cool again, which seemed like an impossible task. Now that the public mind has been saturated with images of Eminem driving a 200, Chrysler has moved on to a new city: Gotham.

The Batmobile might be made by Wayne Enterprises, but Chrysler’s new ad campaign hopes to tie the company’s products to the Caped Crusader. The campaign coincides with the release of The Dark Knight Rises, the final film in the Christopher Nolan Batman series.

Chrysler released a commercial with the “Imported from Gotham City” tagline, featuring the 300S sedan. As Nolan-esque music plays, technicians strip the 300 and reinforce it to cope with the mean streets of Gotham. The reassembled car, sporting the vanity plate “DK-300S,” has a matte gray paint job and black wheels, which give it an intimidating look. Backing up that look is a Batmobile-style rocket propulsion system and a cluster of missiles in the grille.

According to Chrysler, the Gothamized 300S will be driven by a character in the film.

The car will also be part of a contest for fans. Chrysler’s ad men are making them do some of the work: contestants can go to ImportedFrom GothamCity.com and use video and music clips to make their own commercial. Director Christopher Nolan will pick the winner, which might be broadcast on national television. The winner will be flown to New York City for the movie’s premiere.

The 300S is a trim level on Chrysler’s large sedan designed to attract younger customers. Since the original 300 debuted in 1955, chrome and wood trim have been where it’s at. Appealing to customers who think that stuff is too dated or garish, Chrysler trimmed the 300S in black chrome and body-color accents. On the inside, piano black or matte carbon trim replace wood.

Underneath the new trim, the 300S retains the other 300s’ rear-wheel drive chassis, with optional four-wheel drive. This chic 300 is available with either a 292 horsepower 3.6-liter V6 or a 363 hp 5.7-liter Hemi V8. Both engines are decently powerful, but neither will be able to keep up with the Batmobile.

Would Batman approve of the 300 and its Gotham-specific modifications? As an uncorruptible symbol of justice, the Dark Knight doesn’t normally do sponsorship deals. The last Batmobile based on a recognizable car was driven by Adam West in the 1960s Batman television show. That car was made from the 1955 Lincoln Futura concept car.