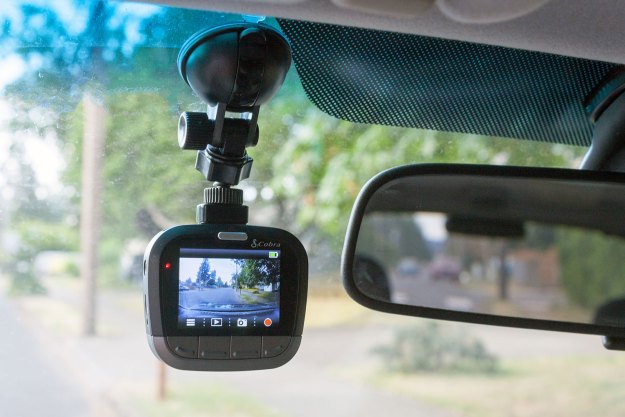 “The Cobra 895 D offers great quality for a price much lower than the competition.”

Many modern dash cameras are great at capturing all the action that lies ahead of your vehicle but can’t show the rear or footage of the interior. Cobra is joining the growing number of companies offering a dual-camera system with their newest 895 D to help give you a full view. We took a look to see if any blind spots remain with this latest addition.

Out of the box, you will get a similar camera design found in the Cobra 855 BT system for the front camera. This camera features the same 160-degree viewing angle and 1920 x 1080 pixel resolution at 30fps, but does not have the Bluetooth connection capability for GPS tracking. The rear camera has a 130-degree viewing angle and a 1280 x 720 pixel resolution at 30fps. Its design is compact and cylindrical, similar to the rear camera from the BlackVue system. It adheres to the glass with a 3M adhesive and is not easily removable once set in place while up front, a suction mount is included and attaches to a quick release bracket that lets you slide the camera off easily.

To get everything connected, the kit includes a y-splitter cable that comes out of the front camera and connects it to both the 12 volt power source and the rear camera. A 20 ft extender cable is included to make sure you have enough to power the second camera, if you decide to mount it in the rear of your vehicle. If not, you can also remove the extender and mount the second camera in the front of the cabin. Just rotate the lens inward to capture what is going on inside your vehicle. This setup would be perfect for any Uber or Lyft drivers who wish to have proof of their driving habits. We instead mounted the camera in the rear window and had to adjust it several times due to the angle of the rear glass in our 2012 Lincoln MKZ. A large 16GB MicroSD is included to record two clips from each camera. In total, the 16GB card could store around 75 minutes of footage at the highest resolution setting for both cameras.

Setup to start recording is actually fairly simple as the cameras begin recording once connected and powered on. In standard loop recording mode, the camera captures three-minute videos and once full, will overwrite the oldest videos. You can also set the loop recording clips to be five or 10 minutes long in the camera settings, but three minutes seemed to be the best way to manage space on the card. With the dual camera setup in the 895 D, you will get a split-screen view of both cameras on the display. You can then cycle to show either camera or turn the display off. Unlike the Cobra 855 BT, there is no way to connect the 895 D to the iRadar mobile application to view clips or add GPS tracking information to the clips. For GPS tracking, you would have to purchase the GPS mount accessory for an additional $40 over the 895 D’s $200 price tag.

Quality from the front camera is great and what we have come to expect from Cobra with clear recordings in all lighting conditions.

Similar to the other Cobra dash cameras that we have tested, the system will go into emergency recording mode when it senses an accident from the internal accelerometer, which can also be manually triggered with a button over the screen. This button is helpful in times where you may want to save footage, but haven’t necessarily been in an accident, such as an Uber driver with passenger issues. A Parking Mode is also available and can be set to record any motion or movement from the accelerometer after your have left your vehicle. With the additional GPS accessory, the 895 D also features a Frontal Collision Warning System to let you know if you are approaching the car ahead of you too fast. We weren’t able to test that feature but tried to get the new Lane Departure system to alert us when merging out of our lane without any success. The system mentioned that it needed a clear view of the lanes and it may be that the angle on our front windshield did not allow a clear enough picture ahead of the car.

Quality from the front camera is great and what we have come to expect from Cobra, with clear recordings in all lighting conditions. There is a lack of definition at night depending on the lighting out in front of your vehicle, but that is to be expected with most dash cameras. The second camera is very clear when filming the interior of the vehicle, but somewhat difficult to manage when recording out the rear window. Mileage may vary greatly depending on the angle of the rear window in your car and it can take time to find the right placement. As mentioned, our vehicle’s glass was angled and would catch a fair bit of glare from the sun and interior trim when mounted in most locations. We finally found a spot where visibility was best, but still found it difficult to make out details such as a license plate number without perfect lighting conditions.

For $200 the Cobra 895 D offers great quality for a price much lower than the competition from brands like BlackVue. The second camera is rather discreet and connects seamlessly to the existing Cobra dash cam system we have come to appreciate. Missing features such as built-in GPS and the ability to connect with the iRadar mobile application hold this camera back from being truly great. But if you are looking for a budget dual camera setup that is easy to set and forget, then the Cobra 895 D is worth a look.