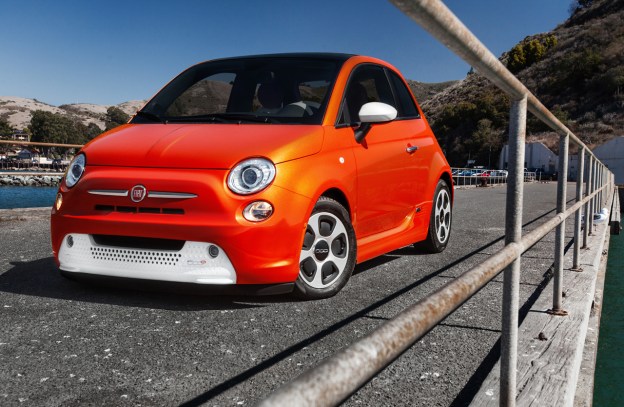 For a car Fiat didn’t want to build, the 500e did surprisingly well in EPA testing. Fiat’s little EV was rated at 112 MPGe city and 108 MPGe highway; its official range is 87 miles. That means this limited-production model won’t embarrass itself when compared to other EVs.

When Fiat unveiled the 500e at the 2012 Los Angeles Auto Show, it said the car could travel up to 100 miles in city driving, and at least 80 miles in mixed city and highway driving. The official 87-mile range more or less splits the difference, and compares favorably with EVs like the Nissan Leaf (79 miles) and Honda Fit (82 miles).

Fiat calls the 500e’s range “best-in-class among volume manufacturers” but, as the numbers show, this is a case of parity, not domination. Luckily for Fiat, comparing a 500e to a Tesla Model S would be too ridiculous to contemplate.

All of this is somewhat moot, though. Fiat is only building the 500e to comply with California’s Zero Emission Vehicle regulations so, like the Scion iQ EV, it will not be a mass-market item.

The 500e will only be sold in California, and its price has not been disclosed. At the LA Show, Fiat-Chrysler CEO Sergio Marchionne said his company will lose $10,000 per car, so don’t expect the 500e to be cheap, or plentiful.

Despite its lack of enthusiasm, Fiat has delivered a solid EV, at least on paper. The 500e’s range and MPGe put it right in the middle of the current EV crowd, which is pretty good for a rush job.