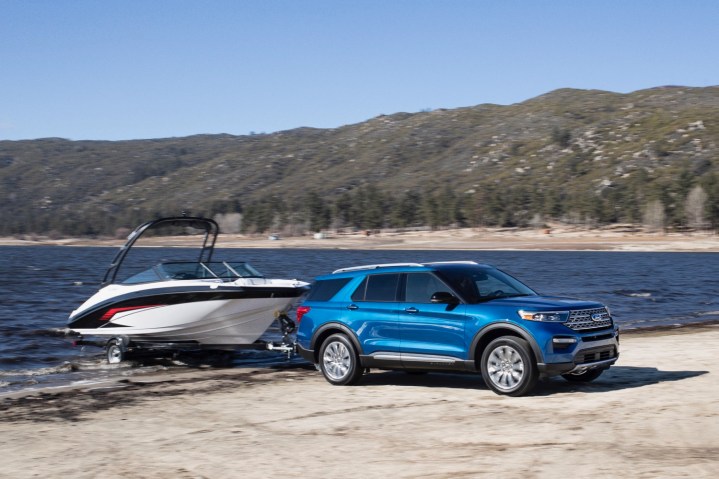 Ford is planning to launch a hybrid version of its bestselling F-150 pickup truck, as well as a slew of hybrid SUVs. The Detroit automaker wants to increase fuel economy without sacrificing the things truck and SUV buyers value, like towing capacity and off-road capability. So Ford is preparing a tougher lineup of hybrid powertrains based around a modified automatic transmission, as this Automotive News overview explains.

The system, dubbed “modular hybrid technology” by Ford, was designed for vehicles based on rear-wheel drive platforms that use the 10-speed automatic transmission co-developed by Ford and General Motors. It allows an electric motor to be wedged between the transmission and internal-combustion engine. That saves money by reducing the complexity of the setup (Ford claims roughly 90% of parts are shared with the conventional 10-speed automatic). There is nothing particularly novel about the setup, but it’s important nonetheless because of the high-volume vehicles Ford plans to put it in.

The hybrid system will debut in the 2020 Ford Explorer, which goes on sale later this year. In the Explorer, the electric motor will make 44 horsepower on its own, according to Automotive News, and will be teamed with a 3.3-liter V6 engine to produce 318 hp and 322 pound-feet of torque. Gas-mileage figures aren’t available yet, but Ford previously said the Explorer hybrid will have a 500-mile driving range.

Ford is refining other aspects of its hybrid powertrains as well. The lithium-ion battery pack that will be used in the Explorer is 33% smaller than the pack used in the original Ford Escape hybrid, which debuted in 2005. Ford will also use exhaust-gas recirculation, which harvests heat from the exhaust system to do productive things. In the modular-hybrid technology system, it will be used to warm up the engine and transmission more quickly.

Ford hasn’t said which vehicle will get the new hybrid system after the Explorer, but there are multiple possibilities. The F-150 uses the 10-speed automatic transmission, and a hybrid variant is already confirmed. The upcoming Ford Bronco is also expected to get a hybrid powertrain, although full details won’t be revealed until closer to its 2020 launch. Outside of trucks and SUVs, it’s worth noting that the Ford Mustang is slated to get a hybrid variant, and currently uses the 10-speed automatic.

Not every Ford hybrid will get the modular-hybrid technology system, though. Ford also developed a new hybrid system for front-wheel drive platforms, which will debut in the 2020 Escape. This system will be paired with a 2.5-liter four-cylinder engine in the Escape, generating a combined 198 hp from gasoline and electricity. However, the system won’t be available with all-wheel drive, as the combination was deemed too costly. Ford will also offer an Escape plug-in hybrid with an electric-only range of 30 miles. The plug-in hybrid powertrain will likely be used in the Escape’s 2020 Lincoln Corsair sibling as well.

Ford previously said it would invest $11 billion in electrification by 2022, and launch 40 electrified models. That total includes 16 all-electric cars, including a “Mustang-inspired” crossover, an electric version of the F-150, and a third vehicle developed in partnership with startup Rivian. Ford is looking to catch up to, and eventually surpass, rival General Motors, which advanced plug-in hybrid powertrain technology with its (now-discontinued) Chevrolet Volt, then the Chevy Bolt EV, the first mass-market electric car with a range of more than 200 miles.