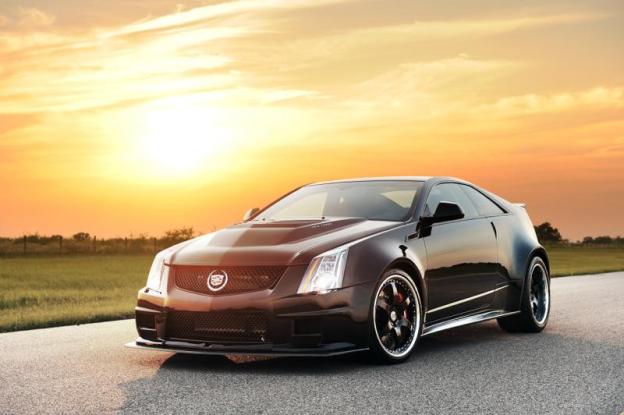 Most Cadillacs are designed to woo potential buyers away from their BMWs with luxury and sophistication, but the Hennessey VR1200 Twin Turbo Coupe will frighten the competition into submission. Texas tuning legend John Hennessey gave this Caddy 1,200 horsepower.

The VR1200 Twin Turbo Coupe starts out as an already-impressive CTS-V, with a 556 hp, 6.2-liter V8. Hennessey increased displacement to 7.0 liters and, per the car’s name, added a pair of turbochargers.

To keep the engine from destroying itself, The VR1200 sports an air-to-water intercooler, heavy-duty fuel injectors, and reinforced engine internals. Forged aluminum pistons, forged steel connecting rods, and a complete balancing and blueprinting should cause gearheads to salivate.

The result is 1,226 hp and 1,109 lb-ft of torque. That means this Cadillac makes more power than any production car; the Bugatti Veyron Super Sport only makes 1,200 hp.

Putting all that power to the ground is a six-speed manual transmission. Mercedes-Benz AMG likes to say that its cars have too much torque for a clutch, but Hennessey seems to have found one (perhaps it’s made of Unobtanium) that can handle over 1,000 lb-ft. A specially built automatic is optional.

All that power means the VR1200 will probably have traction issues, so Hennessey fitted it with 20×13-inch rear wheels and 345/30-20 rear tires that could have been taken off Batman’s Tumbler.

With its bulging hood and hunkered-down stance (the car is lowered one inch), the VR1200 looks like a Batmobile, especially in black.

Hennessey Performance’s motto is simply “Making Fast Cars Since 1991,” and this Cadillac doesn’t let the side down. After all, with over 1,000 hp, one would expect a car to be fast. Hennessey says the VR1200 will do 0 to 60 mph in 2.9 seconds, within spitting distance of a Lamborghini Aventador. It will also cover the quarter mile in the coveted 10 second range; 10.2 seconds at 141 mph, to be exact.

However, Hennessey’s biggest claim involves the VR1200’s top speed. The company says their crazy Caddy will hit 242 mph, making it faster than the McLaren F1 and nearly every other supercar.

In fact, there are only three production cars that can beat 242 mph: the Bugatti Veyron 16.4, SSC Ultimate Aero, and the aforementioned Veyron Super Sport. Being a modified CTS-V, the VR1200 isn’t really a production car, but if it really can hang with these machines, it would be the king of modified cars.

How much will the king of modified cars cost? With all the bells, whistles, and turbochargers, the VR1200 will cost roughly $295,000. That may seem like a lot for a Cadillac CTS, but if Hennessey’s performance claims are true, it will be a relative bargain compared to supercars like the Aventador, which starts at $406,000, and the $1,000,000 Veyron.

Those who want to taste the insanity of 1,200 hp should hurry: Hennessey is only making 12 VR1200 Twin Turbo Coupes.

2020 Cadillac CTS-V has reduced performance, but also a lower price