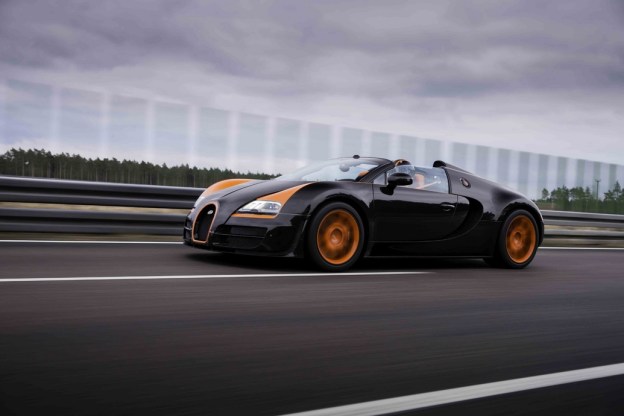 The Bugatti Veyron Super Sport may have just lost the title of “World’s Fastest Production Car” on a technicality, but all is not lost. The Super Sport’s open-roofed twin, the Veyron Grand Sport Vitesse, is officially the world’s fastest open-topped production car.

The record was certified by independent adjudicators from Germany’s TÜV. The Guinness Book of World Records, which recently stripped the hardtop Veyron SS of its record because Bugatti disengaged the car’s speed limiter, hasn’t weighed in.

The Veyron Grand Sport Vitesse is essentially a topless version of the Super Sport. It has the same quad-turbocharged W16 engine, which produces 1,200 horsepower and 1,106 pound-feet of torque. It also features similar aerodynamic modifications and a variation of the SS’ black and orange war paint.

Also, while Vitesse and regular Grand Sport have removable roofs, the term “open-topped” is more appropriate than “convertible.” The hard roof panel has to be removed manually and stowed, so popping the top on the move isn’t possible.

If you want to go faster than anyone else while getting a suntan, Bugatti is building eight World Record Car Edition models to commemorate the Grand Sport Vitesse’s achievement.

They’ll come in the same black and orange color scheme as the car that actually broke the record, and cost around $2.6 million each.

Just don’t wear a hat you don’t want to lose while driving one.