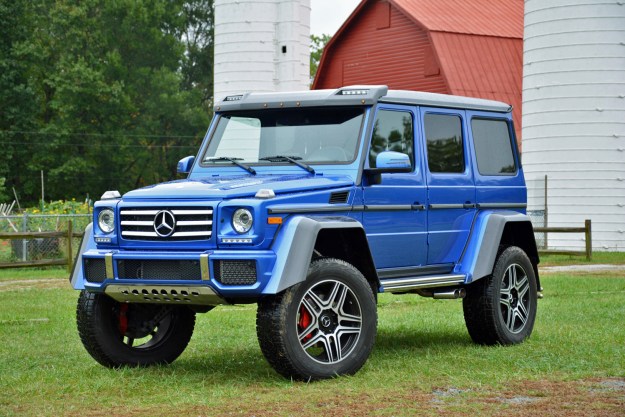 “There is nothing else like the Mercedes-Benz G550 4x4² on the market today.”

The year is 2055. Jeep still makes the fourth-generation Wrangler introduced at the 2017 Los Angeles Auto Show. It looks the same as it did 38 years ago, but it’s now an ultra-luxurious model with available V12 power. While this scenario sounds inconceivable outside of the bizarro world, it’s exactly the kind of transformation those who followed the Mercedes-Benz G-Class’ evolution have witnessed.

The G’s production run is coming to an end; a brand-new model will make its debut in a few short weeks at the Detroit Auto Show. Mercedes made sure it goes out with a bang by turning up the craziness with limited-edition models like the G550 4×4². Just 300 examples sailed from Germany to America, and we got our hands on one to bid the G farewell.

Highly resistant to change, the Mercedes G-Class made its debut in 1979 as an off-roader in the vein of the Land Rover Series III, which was replaced by the venerable, and now defunct, Defender. Its target audience initially included the armed forces in dozens of countries, farmers, adventurers, and motorists who lived (or regularly ventured) far off the beaten path.

Here’s who it wasn’t aimed at: Americans. Some early examples trickled in through gray market channels with varying degrees of dubiousness, but official sales didn’t begin here until 2002. By that point, the G had already moved considerably farther upmarket than its creators envisioned in their wildest dreams. It continued on this upward journey, rising steadily over the following decade and a half. Which brings us to our test subject.

Mercedes introduced the G550 4×4² (or 4×4-squared) as a close-to-production concept at the 2015 Geneva Auto Show. It’s a toned-down version of the truly monstrous G63 6×6. It gains portal axles normally booked by the Unimog, correspondingly wide fender flares, appropriately huge wheels, and a custom-designed suspension to prevent the package from springing apart at the seams.

Power comes from a twin-turbocharged 4.0-liter V8 that produces 416 horsepower between 5,250 and 5,500 rpm and 450 pound-feet of torque over a relatively wide band that stretches from 2,250 to 4,750 rpm. The eight’s output flows to all four wheels via a seven-speed automatic transmission that can be left in drive or controlled with shift paddles.

Nothing – it’s quite the opposite, actually. Mercedes is ending production of the G-Class. We’ll tell you all about the brand-new second-generation model when we get to spend time behind the wheel.

The 4×4² is an overgrown throw-back to the 1970s, a one-finger salute to anything that falls under the “future of mobility” label. Its tech quotient is fabulously low. Inside, designers planted a color screen on top of the center console to display the infotainment system. Don’t poke at it; it’s controlled, somewhat awkwardly, using a knob placed between the gear selector and the armrest. Its resolution is adequate, but it’s not the most straight-forward system on the market. We’d much prefer a more conventional touch screen set-up, though that might come down to personal preference.

That’s about it when it comes to tech, save for a rear-view camera and parking sensors up front. Don’t expect to find adaptive cruise control, lane change assist, or pedestrian detection here. Our test car didn’t even come with basic cruise control.

The cabin is a cross between old-school and upscale-school. In some ways, you can tell it hasn’t changed much since 1979. The flat, wide windshield is just a couple of inches away from the top of the steering wheel, a tell-tale sign that a car was designed many decades ago. Mercedes updated the dashboard but the shell it’s built on is still tall and shallow. The layout is reminiscent of the Defender, may it rest in peace, and the Wrangler. It also amusingly reminds us of an older Volkswagen Beetle.

The G’s cabin would satisfy the Sultan of Timbuktu should he resurrect and make his wish for a vehicle known.

On these tried-and-true bones, Mercedes grafted a panoply of amenities that would satisfy the Sultan of Timbuktu should he come back from the grave and make his wish for a personal vehicle known. The cabin is draped in leather upholstery with Dinamica – Benz-speak for a suede-like microfiber material – inserts in the seats, the door panels, and on the sides of the steering wheel.

The outer parts of the seats boast white contrast stitching while the Dinamica in the center is diamond-stitched. Real carbon fiber trim adorns the dashboard and the center console. Finally, some of the seat adjustments are pneumatically controlled with a quartet of rotary dials mounted in a cluster sandwiched between the edge of the seat and the center console. The air chambers modify the lumbar support and the amount of bolstering on either side of your rib cage, among other parameters.

The controls are straight-forward and located where you expect them to be, especially if you’re used to the way Mercedes does things. The materials are top-notch and the panel gaps are as straight as a highway in the Nevada desert. Magna-Steyr builds the G-Class by hand in Graz, Austria, and the craftsmanship really shines through.

You sit relatively high up in the standard G-Class, so we don’t need to describe what a commanding view you get from the cockpit in this version. The cabin is not as spacious as you would imagine for such a large vehicle, but we wouldn’t qualify it as cramped, either. There is enough space for four adults, maybe five if one of them is on the smaller side, and 40.3 cubic feet of trunk space. Fold the rear seats down to obtain 75.1 cubes.

Some parts of the G-Class don’t change regardless of ground clearance, like the characteristic “thump!” immediately followed by a solid “click!” when you close the doors. The squared model makes the same sound, its eight-cylinder engine emits the same fierce growl, and the process of shifting it into gear with a quick flick of the lever is identical in the two cars. The portal axles create a more truck-like driving experience, but the 6,500-pound G550 4×4² gets up to speed with the effortless nonchalance of an adult asked to count to three. 416 horsepower isn’t asking a lot from a four-liter V8 with two turbos strapped to it so there’s no need to wring it out to generate forward motion.

Body roll is pronounced, but it’s not as bad as you’d expect thanks to the model-specific suspension system we mentioned earlier. Glance through our gallery and you’ll notice there are two dampers and two springs per wheel, whereas the regular G-Class uses one per corner, so a total of four. The extra pair isn’t redundant. It helps make sure the G550 doesn’t lean into a turn like a Boeing 747 mid-flight. The additional support makes for a stiff ride, especially over rough pavement. The built-in “comfort” mode did little to soften it up.

The kind of off-roading we partook in with our German behemoth can best be described as “light,” especially considering the serious hardware baked into it. There are the parts visible from a distance; the 22-inch wheels, the gigantic Pirelli tires, and the unbelievable ground clearance. But there are also the parts you can’t see without crawling under it, like a two-speed transfer case and three differential locks.

If you encounter small obstacles the G will crawl right over them without soliciting any throttle input. When the going gets tougher, all it takes is a lazy push of the “low range” button located right behind the shift lever to power through, or over, whatever is in the way.

The front skid plate confidently crushes any object that tries to ambush the mechanical components. Mercedes told us we can drive through 39.4 inches of water, but we didn’t put that figure to the test to avoid throwing the local fishermen into panic.

Where it doesn’t shine, as you’d expect, is in the city. We mustered up the courage to drive it through downtown Washington D.C. on two separate occasions and came back from each with a few additional gray hairs. The extra-wide track pushes the wheels to the limits of the lane markings, placing the G perilously close to other drivers.

Where it doesn’t shine, as you’d expect, is in the city.

You know those S-shaped bends in construction zones, often accompanied by a “narrow lanes” sign? That’s no fun in this car, take our word for it. But considering its extreme width and monster truck-like height, it’s a short vehicle; it’s actually seven inches shorter from bumper to bumper than a Jeep Wrangler Unlimited. It’s easily maneuverable.

The Environmental Protection Agency (EPA) optimistically rates the G550 4×4² at 11 mpg combined. That sounds dismal, and it is, but it’s not a car developed with efficiency in mind. 11 mpg would be wholly unacceptable in a $25,000 commuter SUV – though, don’t forget we were about at those levels not that long ago. When talking about such a low-volume niche model, we’d argue it doesn’t really matter whether it returns 11, 22, or 33 mpg, or if it runs on a Jägermeister-like elixir made once every leap year by German alchemists.

If the 17.2 inches of ground clearance don’t bring you peace of mind, rest assured the G550 4×4² comes with dual front and curtain airbags in addition to traction and stability control systems.

There aren’t very many options to choose from. We’d get ours in black for a more low-key look and try to talk (or bribe) Mercedes into including the two-piece 18-inch beadlock wheels we saw on the concept that made its debut two and a half years ago in Geneva.

There’s nothing else like the Mercedes-Benz G550 4×4² on the road today. It’s a Tonka truck for adults, with more performance and luxury than Mattel ever envisioned for its plastic toy.

The G-Class’ illustrious production run, culminating with limited-edition versions like the G550 4×4², illustrates Mercedes’ spectacular breadth. Other companies have had the opportunity to build something similar; Land Rover could have done it with the Defender, Toyota could pull the same trick with the 70-Series Land Cruiser, and, with enough inventiveness, Lada could even build a monster truck Niva. But they haven’t. It takes a great deal of cachet to design one, sell it for a quarter of a million dollars, and retain credibility.

Not really, no. If your main priority is covering a great deal of distance without being burdened by roads you can also consider a small aircraft, like a Cessna 172R with a turbodiesel engine. Used examples are cheaper than the Mercedes but a lot more cramped inside, and even less practical when the time comes to return to something resembling Webster’s definition of civilization.

The G550’s house-like price places it in the same segment as the Bentley Bentayga, but they’re two different species from the same genus. The Bentayga is appreciably faster than the G-Class and much more luxurious inside, but it’s not nearly as capable off-road and it’s a few notches down on the outrageousness scale. The G550 4×4² is truly in a class of its own.

The G-Class will outlive us all. It will roam the surface of the earth until it gets engulfed by the sun and the ensuing explosion spit-balls the boxy SUV onto another planet, where it will provide an unsuspecting alien couple with many more years of reliable service. They won’t benefit from the manufacturer’s four-year, 50,000-mile warranty, though.

What, you haven’t already? It’s probably too late then, unless you’re willing to settle for a used one.