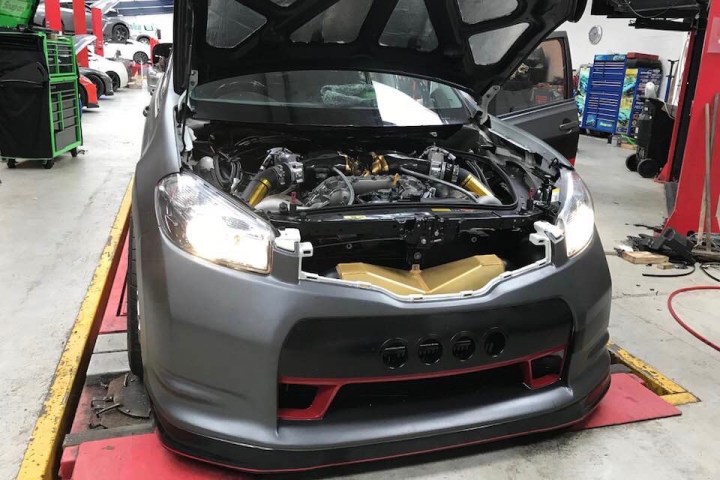 The world’s fastest SUV isn’t a Porsche Cayenne or Jeep Grand Cherokee Trackhawk. It may very well be a first-generation Nissan Qashqai, a humble family car sold in large numbers in Europe (the current-generation Qashqai is sold in the United States as the Rogue Sport). Severn Valley Motorsport, a tuning company based in the United Kingdom, claims to have turned a Qashqai into the fastest SUV of all.

Severn Valley Motorsport’s Qashqai-R is a Frankenstein creation that marries the body of a Qashqai with the 3.8-liter, twin-turbocharged V6 from a Nissan GT-R. Reminiscent of Nissan’s own hilarious GT-R-engined Juke-R (which was actually sold to a small number of well-heeled customers), the Qashqai-R first broke cover in 2014 with 1,100 horsepower. But thanks to upgrades, including new turbochargers, it now makes 2,000 hp. To put that in perspective, a stock 2018 GT-R NISMO, the most potent factory GT-R variant, makes “only” 600 hp.

That was enough to give the Qashqai-R the record for world’s fastest SUV, according to Severn Valley Motorsport. A company Facebook post said the Qashqai-R reached 237.8 mph at VMax 200, a top-speed contest held on a private two-mile airstrip. That beats the 230.2 mph top speed of the previous record holder, the Toyota Land Speed Cruiser, a 2,000-hp twin-turbo V8 monster commissioned by Toyota itself.

One could argue that Toyota still has a claim to the title. The Qashqai is, strictly speaking, a car-based crossover, not a traditional body-on-frame SUV like the Land Cruiser. While the terms “crossover” and “SUV” are often used interchangeably, crossovers have more in common with cars than they do with traditional SUVs. So picking a winner here depends on one’s definition of “SUV.”

Either way, the Qashqai-R is seriously fast, and it’s funny to see such an unassuming vehicle transformed into something that can outrun supercars. We’ll see if Toyota makes another go at the record with its Land Speed Cruiser, or if another company builds a new contender for the title of world’s fastest SUV (we’re looking at you, Jeep). In the meantime, Severn Valley Motorsport has promised to release a video of the record run, which should be pretty entertaining to watch.