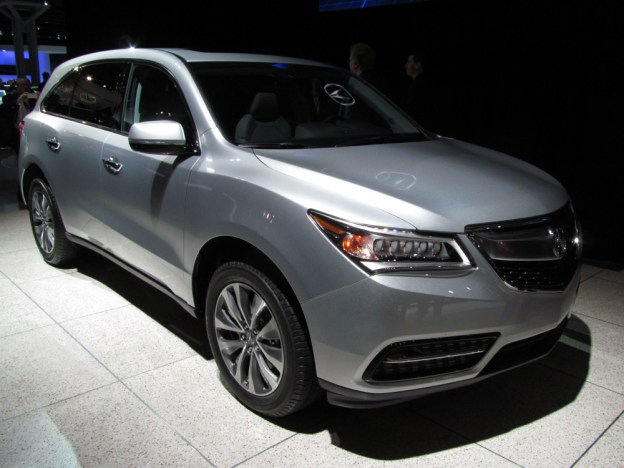 Acura unveiled the third generation of its flagship SUV, the MDX, at the 2013 New York Auto Show. Honda’s upscale brand is pitching the MDX as a high-tech take on the sport-utility vehicle class.

We got a peak at the 2014 MDX’s styling with the MDX Prototype Acura unveiled at the Detroit Auto Show. The styling is definitely more evolution than revolution, with plenty of references to other Acuras, particularly the RDX crossover and RLX sedan. The small, inline “Jewel” LED headlights are becoming an Acura trademark.

Underneath the subtle skin, there are some major changes. The MDX gets its own version of Acura’s Super Handling All-Wheel Drive, which uses torque vectoring to push the car through corners. Acura will also sell the MDX with front-wheel drive for the first time.

The 2014 MDX will be powered by a 3.5-liter direct-injected V6 from Honda’s Earth Dreams line. It puts out an impressive 290 horsepower and 276 pound-feet of torque, and is connected to a six-speed manual transmission.

Acura says the new MDX is also light on its feet. A claimed 55 percent of the chassis is made from lightweight materials, including high strength steel, aluminum, and magnesium. The result is a 275-pound weight savings over the previous model.

To allow drivers to determine how they want to exploit that lightweight chassis, Acura gave the MDX a three-mode Integrated Dynamic System, which allows the driver to adjust the steering feel, throttle response, and even the amount of engine sound piped into the cabin.

The three modes are Sport, Normal, and Comfort. Sport may seem unnecessary in a big SUV, but neither does sending said SUV around the Nurburgring for suspension tuning. Acura did that too.

Tech features include an ELS Studio sound system, and the AcuraLink infotainment system. The latter includes phone-based apps like Spotify and Aha, all displayed on a seven-inch touchscreen.

Acura is proud of reducing the number of dashboard buttons on the MDX from 41 to nine, but given what we’ve seen with other touchscreen-based systems like Cadillac’s CUE, maybe that’s not a good thing.

The 2014 MDX goes on sale this summer. Pricing will be announced closer to the on-sale date.