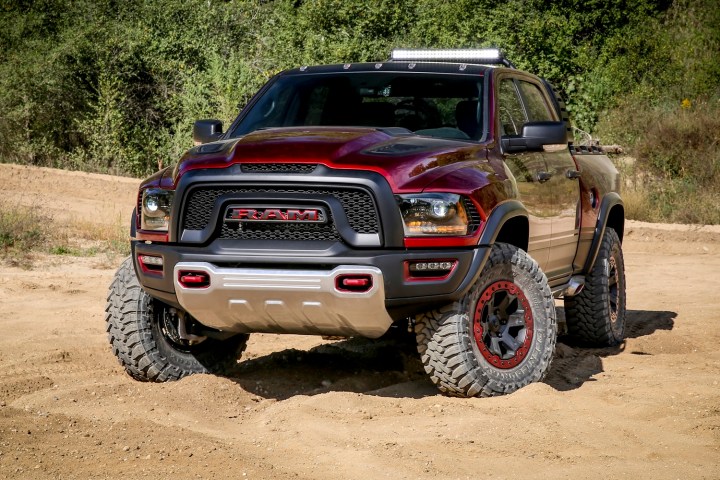 The Ford F-150 Raptor finally has some competition. Fiat Chrysler Automobiles has confirmed that the Ram Rebel TRX off-road performance pickup truck will go into production sometime before 2022. The announcement was made during a presentation of FCA’s latest five-year plan during an investor meeting in Italy.

No further details were given, but if the production truck stays close to the original TRX concept, it could be a contender. Introduced at the 2016 State Fair of Texas, the TRX concept boasts a 6.2-liter supercharged Hemi V8 with 575 horsepower, as well as beefed-up suspension and aggressive styling.

A production TRX could be the perfect rival to Ford’s F-150 Raptor, which has the uncanny ability to cover rough terrain at high speeds. The only truck currently in production with a similar skill set is the Chevrolet Colorado ZR2, but it’s a smaller midsize model. The TRX will likely be based on the Ram 1500, making it more of a direct rival to the Raptor. With a powerful V8 engine under the hood, it should be able to match the Ford’s pace.

Online chatter indicates that the V8 may be different than the TRX concept’s, but in a good way. Motor Authority points out that an official press photo of the interior of the 2019 Ram 1500 shows the clock reading “7:07,” a possible reference to the 707-hp “Hellcat” Hemi V8 currently installed in other FCA vehicles. Ram has denied plans for a Hellcat-powered truck in the past, but perhaps the brass have changed their minds.

Posters on the Allpar forums claim the TRX will share a new generation of aluminum Hemi V8s with other FCA products — including a resurrected Dodge Viper sports car. The new engine family is rumored to include a naturally aspirated 7.0-liter Hemi with 520 hp, and a second-generation Hellcat engine maintaining the same specifications as its predecessor.

In other Ram news, the brand will introduce redesigned versions of its 2500 and 3500 Heavy Duty trucks at the 2019 Detroit Auto Show. That will just be the tip of the iceberg for FCA’s five-year plan. The Italian-American automaker will also introduce a plethora of electrified models across multiple brands, including Alfa Romeo, Maserati, and Jeep. Maserati will get an electric sports car based on the 2014 Alfieri concept, while Alfa will get a new range-topping supercar called 8C — with a 700-hp hybrid powertrain.