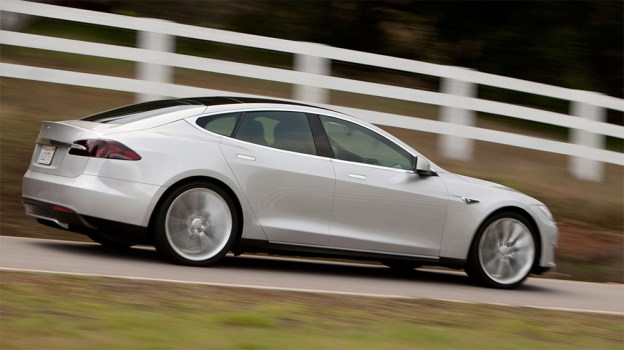 After the New York Times published a critical review of the Model S, Tesla Motors CEO Elon Musk accused the newspaper of faking the circumstances of the story. Data logged during the drive seemed to give this accusation merit, and Musk went on to accuse Times reporter John Broder of sabotaging the test. Now, Broder is answering the questions brought up by Tesla’s data in a blog post.

The issue at stake is whether the Model S and Tesla’s Supercharger stations underperformed, or, as Musk says, Broder used both improperly.

In his blog post, Broder reiterates that he was in continuous contact with Tesla employees throughout the trip, and followed whatever advice they gave him.

A major point of contention is whether Broder fully charged the car at each of his stops. In particular, Musk accuses Broder of leaving a public (non-Supercharger) station in Norwich, Connecticut with only 32 miles of range, when he needed to drive 61 miles.

Broder says he was following the advice of a Tesla employee. Both Tesla spokeswoman Christine Ra and product planner Ted Merendino said to charge the car for one hour, Broder says, to restore range lost by cold weather. Apparently, the Tesla employees believed the car still had electricity in its batteries that wasn’t being discharged, in which case there wouldn’t have been a need to charge it further.

In between, Broder stopped at the Supercharger station in Milford, Connecticut. The Tesla data shows that he left after charging the battery to 72 percent. Broder says this was intentional, because it should have given him more than enough mileage to complete the next leg of his trip.

Musk also accuses Broder of driving past a public charging station but, again, Broder says no one he talked to at Tesla had told him about it. He notes that he was on his way to another charging station in East Haven, Connecticut when the Model S gave up the ghost in Branford.

Another major point is the way Broder drove the Model S. In his article, Broder said that at one point he had to set the cruise control to 54 mph and lower the cabin temperature to preserve range. Tesla’s data shows average speeds of 65 to 81 mph, and an average temperature of 72 degrees.

Broder says he drove most of the trip at 65 mph, and perhaps hit 81 mph on a downhill stretch. Still, the logs show him going about 60 mph on one stretch where he claims he was doing 45 mph. Broder offers that the car was delivered with 19-inch wheels and all-season tires, not the standard 21-inch wheels and all-season tires, so the data logging equipment may not have been calibrated.

Broder also says that he “raised and lowered the cabin heat in an effort to strike a balance between saving energy and staying somewhat comfortable.”

Musk accuses him of raising the temperature at the precise moment he said he lowered it in the article, but Broder said that was not true.

In his original article, Broder wrote that he “turned the climate control to low” sometime before crossing from New Jersey into New York, but does not give a specific point.

Finally, Musk said Broder drove in circles around the Milford Supercharger, attempting to run the battery down to zero. Broder says it was dark and he had trouble finding the charger because it was not well marked.

In his blog post, Musk says he called to apologize before coming to the conclusion that he’d been “played for a fool.” Broder says Musk also said the Superchargers should have been 60 miles closer together, and offered the Times another test drive after more stations were built.

Topics
Sporty Polestar 3 SUV is an EV guiding star
2023 Kia Niro EV first drive review: Practical doesn’t have to bore you to tears
Nissan wants the 2023 Ariya to be its comeback EV, but the bar has been raised
Elon Musk reveals first delivery date and customer for Tesla Semi truck
Jeep is launching its first two electric SUVs in the U.S. in 2024
2024 Chevrolet Equinox EV aims for affordability with $30,000 base price
Cruise’s robot taxis head to Arizona and Texas
Uber says it’s investigating ‘cybersecurity incident’
Nvidia’s Drive Concierge will fill your car with screens
The Uber hack is an outrageous tale of a teen hacking for fun
Tesla to fix window software on 1M of its U.S. cars
Lux and refreshingly livable, Mercedes’ EQE moves EVs mainstream
How to watch Tesla’s AI Day tonight and what to expect