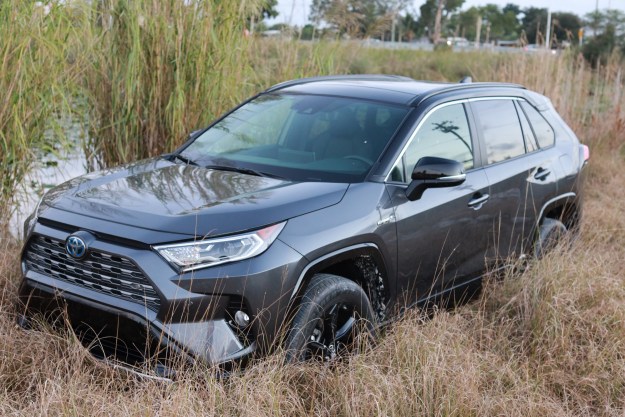 “No one can fault the Toyota RAV4's practicality, especially with hybrid tech and AWD.”

Women buy 54% of the cars in the U.S., and unlike men, they don’t decide which car to buy based on the model or brand. Women tend to be more practical, caring most about interior room or cargo space.

That’s true in my case. As a journalist and filmmaker, I need to keep a second closet in my car and have enough space to bring my lighting and camera gear. And I need space for my two babies – my dog Bruno, and my cat Roberta. I truly want it all.

The Toyota RAV4 Hybrid All-Wheel-Drive (AWD) meets all the above at an affordable price. It allows you to keep your holiday budget by understanding your financial needs, your family, and your lifestyle expectations.

As a thrill-seeker, I decided to analyze this SUV on a trip to where Florida alligators make the rules. Everglades National Park. The muddy park became the perfect place to experiment with the RAV4’s all wheel drive system while I thought about how it might fit my everyday life.

The RAV4 Hybrid AWD is the best-selling SUV in America. While most people buy it with a 4-cylinder engine, the hybrid version offers plenty of advantages. In addition to better gas mileage, it delivers more horsepower than others (219 vs. the 4-cylinder’s 203) thanks to its combination of a gasoline engine up front and electric motor in the rear.

The gasoline engine powers the front wheels, while a 54-horsepower electric exclusively powers the rear end. They work together through an electronic on-demand all-wheel-drive system that lets the car decide how to deliver power.

A system this advanced has practical advantages in treacherous conditions. The off-road experience starts by engaging the Trail mode, allowing the vehicle to become more aggressive and ready to overcome the obstacles ahead.

Although the RAV4 doesn’t have a mechanical locking differential, it does have an electronic lock. A computerized operation that with the rear electric engine activates itself to give more power to the wheels by spinning them faster, and push the vehicle off, thanks to the traction it creates.

By only using the EV mode with the Trail-mode engage, you will be able to drive through steep gravel hills. The automatic all-wheel-drive system allows the computer to analyze where the torque is needed. In this case, up to 80% can go to the rear wheel thanks to the electric motor.

I was impressed by the Hybrid AWD power train. In fact, Digital Trends ranks the Toyota RAV4 as one the best Hybrid family SUV available today.

The RAV4 AWD, which is built on a platform shared with the Camry on the Toyota New Global Architecture (TNGA), it is not designed for extreme off-roading. That’s probably not a surprise.

Still, its off-road capabilities aren’t pointless. Many RAV4 buyers pick Toyota’s small SUV over a Corolla or Camry because of the RAV4’s excellent performance in adverse conditions. The RAV4’s all-wheel-drive system is meant to boost driver confidence, and it succeeds.

If you are hoping to go well off the beaten path, well, don’t fool yourself. The RAV4 Hybrid AWD currently lacks ground clearance, tire capability, and suspension for serious rock-crawling.

The RAV4 Hybrid XSE is 8.1 inches off the ground. That’s plenty to handle most winter storms, but not enough to keep it out of jagged rocks on a trail. The RAV4 is clearly best for people living in the city because it eases the need to adapt to specific situations, like city floods or snowfalls.

However, among its main competitors, the RAV4 is the one that stands out. The Honda CR-V is a well-known rival, with a distance of 7.1 inches from the floor, while the Chevrolet Equinox and the Nissan Rogue have a minimum of 7.9 and 7.4 inches, respectively. The only one matching the Adventure model is the Buick Envision that has 8.6 inches from the floor. Other competitors such as the Hyundai Tucson and Kia Sportage have a ground clearance of 6.4.

Tires are critical for off-roading, too. The RAV4 Hybrid XSE has 18-inch all-season wheels clad in the Dunlop Grandtrek P20. These tires, like the rest of the RAV4 Hybrid XSE, can handle a bit of snow but aren’t ideal for seriously inclement conditions. In my off-road experience, coming up an inclined gravel road, the RAV4 had a hard time – especially the rear wheels.

The rear independent suspension does a better job of maintaining traction. Due to its electric motor in the back, it supports the car while on steep hills. Articulation is not bad, but it lacks lockers (an uncommon feature) or hill descent control (which is more widespread).

While driving RAV4 Hybrid XSE on an inclined gravel road, the rear wheels simply traction. To get out of that situation, I had to back up and accelerate multiple times. The RAV4 Hybrid XSE was better on level roads, and while its clearance is minimal, the few inches it can claim over a Camry are appreciated.

To learn more about the Toyota RAV4 Hybrid XSE’s comfort and cabin, I brought my sister along. She is a busy wife and mother who works a 9 to 5 as an inventory analyst. It was eye-opening to go for a ride with someone whose priorities are completely different from mine and, between use, we put the SUV through its paces.

We both agreed the RAV4, even in Hybrid guise, looks sporty for a small SUV. We thought the RAV4 Hybrid looks fit for a young family like my sister’s, or outdoor-loving singles who want a stylish but economical ride.

The RAV4 really won our hearts with its bold front grille, accompanied by LED headlamps and fog lights. Our tester also had a black package body kit with LED taillamps, spoiler, dual exhaust, and a panoramic sunroof to amplify the view of the road.

Some of these features, like the sunroof, are optional, but the LED lights and dual exhaust tips come standard. Steel wheels are the only low-rent exterior feature on the base RAV4 LE, and all Hybrid models receive an upgrade to alloy wheels.

Powered by a 2.5-liter 4-cylinder continuously variable transmission (CVT). The Toyota RAV4 is a quiet ride. You can talk or listen to your favorite songs without much background noise from the engine. However, my sister Isabel has a 4-year old is around the house, and mentioned she’d prefer it if the RAV4 hybrid made more noise.

The RAV4 is a great size for city life because it is not too large. My test model also had a large backup camera with overhead and 360-degree panoramic view, making it much easier to parallel park at a narrow street.

Toyota offers one of the best Entune Infotainment in the market. A multimedia navigation system that provides satellite-based information on traffic, weather, sports scores, stocks, and many more features. For the price of $1,620, you can get an eight-inch touchscreen that includes knobs and buttons, app integration like Apple CarPlay, and my sister’s favorite, the Wi-Fi connectivity.

Honda’s system is called Hondalink, but it still does not stand out. The CR-V has a 7-inch display, only one knob for the volume, and no Wi-Fi connectivity. Its graphics display appearance falls behind the Toyota Entune system, which has a more prominent touchscreen display at 8 inches.

However, Entune is far from perfect. Android owners won’t be thrilled with RAV4 since Toyota’s infotainment only allows Apple CarPlay. That gives an advantage to the CR-V, because Hondalink supports Apple CarPlay and Android Auto.

The Toyota RAV4 Hybrid’s cabin tech isn’t cutting edge, but the RAV4 does come with a full suite of Toyota Safety Sense 2.0 features. That includes pre-collision braking with pedestrian detection, lane departure alert, automatic high beams, and radar cruise control. Competitors like Honda’s CR-V and Ford’s Escape are on par with Toyota’s system, but options like the Chevy Equinox and Nissan Rogue reserve their full suite of safety features to step-up models.

As the daughters of an auto-part salesman, my sister and I agreed on the overall car price, fuel consumption, and resale potential of the RAV4 XSE. For $38,294, you can enjoy the comfortable leather seats, a digital and analog instrument cluster, a Qi wireless charging pad, and USB chargers in the front and back.

The second row offers enough leg and headroom for large adults, and it has AC vents, but no climate control. The car also offers a power liftgate, and a total cargo capacity of 69.8 cubic feet once the back seats have been folded down. That’s on the higher end of the segment, though the Honda CR-V is slightly better at 75.8 cubic feet.

The Toyota RAV4 is a convenient car, family oriented, and will work for anyone who needs plenty of space in a mid-sized vehicle. It’s not the most exciting pick, but I can find little fault in the RAV4’s practicality.