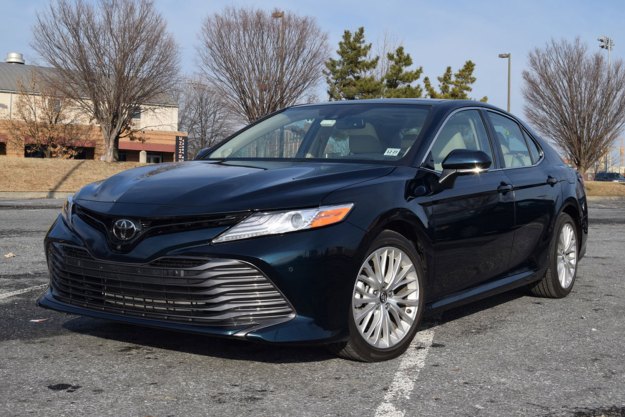 Few vehicles are as ubiquitous as the Toyota Camry.

Toyota has always managed to make it a consistent car that appeals to the masses, which is probably why a family member, a close friend, or an acquaintance you know has one. Being the dependable, stable option, though, doesn’t pay the bills anymore. And one look at the 2019 Toyota Camry reveals that this sedan is far off from the one your grandparents are driving.

You see, the Camry competes in the highly cutthroat midsize sedan segment among the likes of the Mazda6, Nissan Altima, Volkswagen Passat, Hyundai Sonata, and Kia Optima. As crossovers and SUVs continue to fly off of dealer lots in record numbers, sedans are more competitive than ever. Everyone is attempting to one-up each other, adding more features here or more power there in a quest to avoid sinking beneath the wave of mid-size SUVs.

The Mazda6 has moved upscale with a new turbocharged engine, and Nissan added all-wheel drive to the new Altima’s repertoire, but Toyota has taken another route. The Japanese automaker made the Camry longer and wider than before, gave it an all-new design on the inside, and spruced up the exterior. The Camry rides on the new Toyota New Global Architecture (TNGA) that it shares with the 2020 Toyota Corolla, among other models. It’s a thorough evolution of the sedan to mark its eighth generation.

Pricing for the Camry starts at $24,875 for the entry-level L trim with the revised 2.5-liter four-cylinder engine. The cheapest way to get a V6 is with the XLE V6, which is what our tester was, that starts at $35,080. With all of the bells and whistles, our packed-to-the-gills test sedan carried a price tag of $37,824.

The last-generation Camry was attractive in a grown-up way, but the new sedan is sharper, more athletic, and unique. It might be a little too busy for some, but that’s where not playing it safe comes into action. It’s a daring, aggressive design that helps the Camry stand out among its competitors. Toyota has divided the Camry lineup by giving trims with an S, like the SE, XSE, and XSE V6, different front-end designs than the rest of the lineup.

The last-generation Camry was attractive in a grown-up way, but the new sedan is sharper, more athletic, and unique.

While the SE, XSE, and XSE V6 are the sporty trim levels, featuring a more aggressive grille that leads directly into the hood and even quad (that’s right: four!) exhaust tips, the rest of the lineup, including our test XLE V6, are a little more sedate. In place of a busy front end, the XLE V6 has a slim, V-shaped grille with a gaping front air intake. The rest of the sheet metal is the same: sleek, full of sharp creases, and even swoops at the back.

With such a bold exterior design, it wouldn’t make sense for the cabin to be an exercise in constraint. And it isn’t. The dashboard has an asymmetrical design with sweeping lines, and enough curves to make teenagers blush. While high-end trims are filled with upscale materials that border on full-on luxury, lower-end models aren’t so lucky. Even on our upmarket test vehicle, some of the materials, like the black trim piece surrounding the infotainment system and the large trim piece on the dash, are chintzy.

One of the reasons why the Camry has always been a best-selling model in the U.S. is because of its spacious cabin. If there’s one Achilles heel in the sedan’s newly forged armor, it’s interior space. The swooping design eats into overall passenger space, but the good news is you won’t notice it unless you’re an NBA player. Front headroom is down compared to the Accord, Mazda6, and Altima, but rear headroom is up. Rear legroom in the Camry is also down compared to the other tree options, but it doesn’t feel it. Oddly, the Camry feels even more spacious in the back than the Mazda6.

Staying true to tradition, the Camry has a generously-sized trunk, offering 15.1 cubic feet of cargo space. That’s above the Mazda6’s 14.7 cubic feet, but down on the Accord, which has 16.7 cubic feet, and the Altima at 15.4 cubic feet.

Modern Tech For A Modern Age

The Entune system, as a whole, is responsive, but isn’t easy to use. Sorting through the menu is a difficult task and when we finally figured out how to set a destination, we couldn’t figure out how to cancel the route. The touchscreen may be angled toward the driver, but that doesn’t make the analog buttons easier to use because they’re in an odd location. Wanting to adjust the volume, our hand naturally landed on the knob to change the station. This happened multiple times until we caved and started using the volume buttons on the steering wheel.

Thankfully, Toyota has finally given drivers another option by offering Apple CarPlay. Unfortunately, Android users are left out to dry. Toyota barely started warming up to Android Auto in 2019, so the feature could trickle down to the Camry before the end of the current model’s life cycle. Keep your fingers crossed.

Toyota finally opened the door to Apple CarPlay, and the Camry was one of the first models to get it.

Safety is also a key aspect of the new Camry. Every model comes with Toyota Safety Sense P, which includes a pre-collision system with pedestrian detection, lane departure alert with steering assist, automatic high beams, and dynamic radar cruise control. A rearview camera, of course, is also standard – it’s mandatory on all new cars sold in the U.S. Higher trims are fitted with full-speed dynamic radar cruise control, as well as blind spot monitoring with cross-traffic alert. Intelligent clearance sonar with rear cross-traffic braking, a system that lets you know exactly where and in what direction objects around the vehicle are moving, and a 360-degree bird’s eye camera are available.

If you go by the Insurance Institute for Highway Safety’s (IIHS) ratings, the Camry is one of the safest midsize sedans on the road. The IIHS named the vehicle a Top Safety Pick+. The Accord, Altima, and Mazda6 were named as Top Safety Picks, missing out on the “+” designation because of their headlights.

The Most Entertaining Camry Yet

Toyota still offers a potent 3.5-liter V6 engine in the Camry. And while some may see that as a negative, as others have gone down the turbocharged four-cylinder route, the six has an almost muscle-car feel to it. Power is rated at 301 horsepower and 267 pound-feet of torque, which is more than the Accord, Altima, or Mazda6. Front-wheel drive and a smooth, eight-speed automatic transmission come standard.

With all of that power being routed to the front wheels, slamming the accelerator to the floor off of the line results in a copious amount of wheel spin, even with traction control on. If you turn traction control off, you’ll be pulling off decent burnouts. At higher speeds, the V6 dolls out a smooth amount of grunt that makes passing and long-distance cruising a breeze.

If wheel spin and juvenile bursts of power on the highway aren’t your idea of fun, Toyota also offers a 2.5-liter four-cylinder engine for the Camry. Power is up from 178 hp to 206 hp, while torque is now at 186 lb-ft. – an increase of 16 lb-ft of torque from 2017. Those figures aren’t nearly as exciting as the V6’s, but they’re still respectable. They’re also closer to the rest of the segment’s outputs.

As an overall package, there’s never been a more enjoyable Camry to drive.

As an overall package, there’s never been a more enjoyable Camry to drive. The model has always excelled as a usable, perfectly comfortable sedan for daily use, but the new Camry ups the ante with a chassis that’s actually entertaining around corners. A lot of the newfound athleticism is due to the new TNGA platform, which results in a 30-percent increase in torsional rigidity from before. The steering wheel has a good weight to it, though Sport mode makes it obnoxiously so, and the brakes are strong, yet responsive.

It might be stiffer than before, but the Camry still excels at being a comfortable sedan. The ride, even on the worst that a city has to offer, is smooth and refined. The cabin does suffer from a bit of tire noise at highway speeds, but is tranquil at lower speeds.

Fuel economy figures are, obviously, better for the four-cylinder engine. The EPA rates models with that engine at up to 29 mpg city, 41 mpg highway, and 34 mpg combined. Those figures are better than the ones posted by the Accord, Altima, or Mazda6. Going with the V6 brings those down to 22, 33, and 36, respectively. We consistently saw 26 mpg with our time with the vehicle.

Like other new Toyotas, the Camry comes with a three-year, 36,000-mile basic warranty, a five-year, 60,000-mile powertrain warranty, and a five-year, unlimited-mile corrosion perforation warranty. Toyota continually ranks toward the top of the heap when it comes to reliability, and with more than 10 million models sold, the automaker clearly has a good record with the Camry.

Only a handful of automakers offer a V6 in a midsize sedan, making the Camry’s available engine special. But Toyota only offers the six-cylinder engine on upper level trims, which aren’t cheap. And even those lack features like ventilated front seats, heated back seats, and a heated steering wheel. So, as much as we like the power, we’d go with the four-cylinder engine in the XSE trim.

From there, we’d tick the box for galactic aqua mica, which is the gorgeous shade of teal that our tester was finished in. We’d skip all of the available packages, bringing our Camry to $30,505.

The eighth-gen Camry paves a new path for the nameplate, one that brings crucial tech updates, an even more stylish design, and a capable chassis to the picture. Usually, this would come at some kind of compromise, but Toyota has maintained all of the things that made the Camry so popular in the first place. The Camry is better than ever and no longer needs to rely on its excellent value or reliability ratings as a crutch.

Should you buy the Toyota Camry?

Yes. Some competitors may inch out a victory over the Camry in certain areas, but Toyota’s sedan is a capable jack-of-all-trades that does everything well. If styling and safety take precedent over everything else, the latest and greatest Camry is sure to impress.

Topics
Business upfront, 31-inch TV in the back. BMW’s electric i7 is a screening room on wheels
GMC poured all of its truck-making expertise into the Sierra EV pickup
2023 Kia Niro EV first drive review: Practical doesn’t have to bore you to tears
Nissan wants the 2023 Ariya to be its comeback EV, but the bar has been raised
What is a Tesla Supercharger?
Rivian adds Snow Mode through software update just in time for winter
Tesla used car market no longer as lucrative, data shows
What to expect at CES 2023, from mondo TVs to EVs
Kia EV6 GT first-drive review: putting a little more fun into EVs
How to charge your electric car at home
2023 Tesla Roadster: release date, specs, rumors, and news
VW previews its next electric car in trippy camouflaged form
Chrysler Synthesis demonstrator brings more screens and software to vehicle cockpits