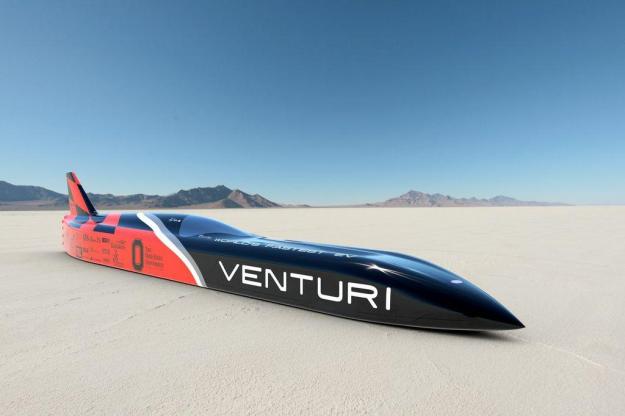 The car you see here is about as far removed from a Nissan Leaf as you can get. It’s a collaboration between Ohio State University and Venturi, and will attempt to set a world speed record for electric cars this September. The target speed? 435 mph (700 kph).

VBB-3 will up the ante with 3,000 horsepower, making it the most powerful electric car ever built. It will be nicknamed “Jamais Contente” in honor of Camille Jenatzi, the first person to break the 100 kph (62 mph) barrier. Jenatzi’s car was named Jamais Contente and was also powered by batteries.

The Buckeye Bullets’ achievements so far have been impressive, but they also show just how far EVs have to go to match the performance of burned carbon compounds.

While OSU and Venturi are tuning VBB-3, Andy Green will be running the jet-and-rocket-powered Bloodhound SSC up to around 800 mph. It will just be a warmup for an eventual attempt at breaking the 1,000 mph barrier, which would make Green the fastest person on wheels.