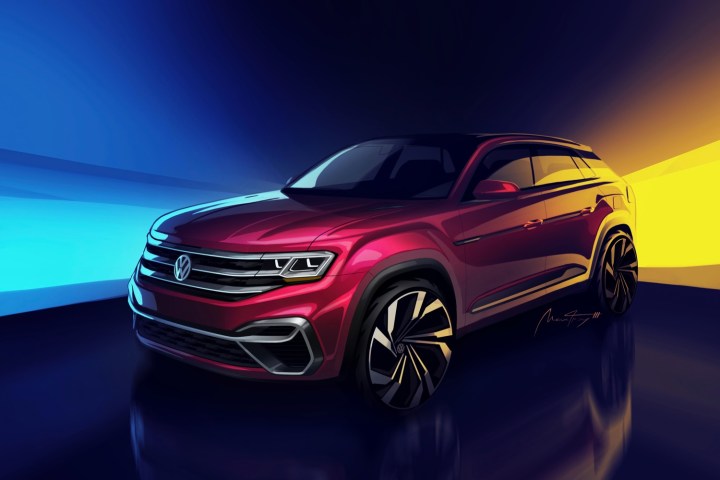 The Volkswagen Atlas is an SUV designed specifically for the U.S. market, but not all U.S. families need all seven of its seats. So VW is preparing a version of the Atlas with five seats, previewed by a concept car debuting at the 2018 New York Auto Show.

Like the seven-seat Atlas, the five-seater will be based on Volkswagen’s ubiquitous MQB platform, which also underpins the compact Golf hatchback and the Audi A3. Judging by VW’s teaser image, the five-seat version may have slightly differently styling to distinguish it from the seven-seat model. VW will essentially be doing the same thing Hyundai has done for the past several years with its Santa Fe, doing more to distinguish variants than simply removing a row of seats.

The Atlas was originally designed to compete in the midsize family SUV segment against the likes of the Santa Fe, Ford Explorer, Honda Pilot, and Toyota Highlander. Volkswagen has been trying to dominate the U.S. market for years, but it never really had a chance of doing that without a vehicle like the Atlas in its lineup.

In addition to being designed for the American market, the Atlas is also built here. The five-seat version will be built alongside the seven-seat model (as well as the Passat sedan), at VW’s factory in Chattanooga, Tennessee. Volkswagen will invest $340 million to get the five-seat Atlas into production on top of $900 million already spent for production of the seven-seat model.

“We are not only committed to this market, we are committed to our U.S. manufacturing home in Chattanooga, Tennessee,” Volkswagen Group of America CEO Hinrich Woebcken said in his announcement of the five-seat model at the factory. The timing of this announcement probably was far from random.

The announcement comes as VW prepares to idle its Chattanooga Passat assembly line for two separate weeks due to low demand for the sedan. A plant spokesperson told the Times Free Press that Volkswagen will use the stoppage to train employees and retool to boost production of the Atlas. It’s yet another example of how aggressively the market is shifting from sedans to SUVs.

Our first look at the five-seat Volkswagen Atlas will take place far away from Tennessee. VW is bringing a pre-production concept version to the 2018 New York Auto Show next week. We’ll have more details when the concept makes its Big Apple debut.