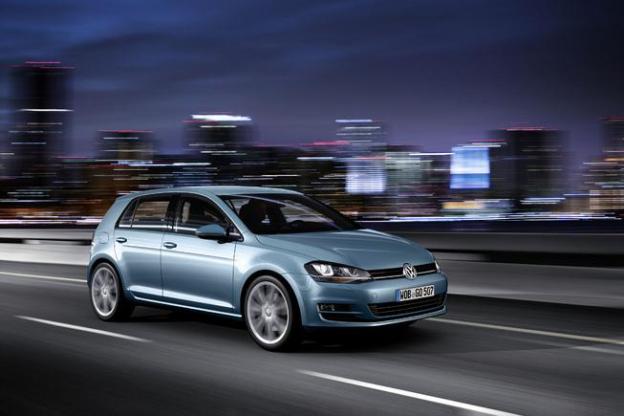 When the all-new seventh generation Golf was unveiled a few months ago, VW noted that it was designed to accommodate an electric powertrain. VW plans to put such a powertrain in a Golf by mid 2014.

Like the e-up!, the e-Golf will most likely be available in both three- and five-door body styles, and will probably look the same as a gasoline or diesel Golf. Buyers looking take a statement with their EVs should consider the Nissan Leaf or Ford Focus Electric.

The e-Golf will also reportedly share its layout with the e-up!. The large and small VW EVs will have their electric motors in their engine bays and lithium-ion battery packs under their rear seats.

The e-Golf’s electric motor will produce around 115 horsepower, but it won’t add much weight compared to the smaller e-up!’s powertrain. The e-Golf’s entire powertrain will weigh about 440 pounds; the e-up! has 82 hp, and its powertrain weighs 400 lbs.

The e-Golf’s range is estimated at 170 miles, allowing it to travel 90 miles further on a single charge than a Leaf. Top speed is an adequate 83 mph. It is unclear whether the e-Golf will have the impressively low charging times VW is promising for the e-up!.

Mid-2014 is a long way away, but Volkswagne CEO Martin Winterkorn quoted an unofficial price of 40,000 euros to AutoBild.

Unlike the smaller e-up!, which will be launched at the Frankfurt Motor Show in September, the e-Golf has a chance of being sold in the United States.

The conventional up! will probably never come to the U.S., but Volkswagen sells plenty of Golfs here, making it less of a hassle to bring the e-Golf into compliance with safety regulations.

However, Volkswagen isn’t talking about e-Golf sales just yet, and there is also a possibility that the EV would be brought over in small batches only, to satisfy California’s zero emission vehicle mandate.

Topics
Tesla invests billions in U.S. gigafactory to boost Semi production
2024 Polestar 2 gets a major overhaul for the 2024 model year
Beware of this EV with pitiful charging speed — and others like it
Watch Hyundai’s Ioniq 5 EV perform a crab walk
What is a Tesla Supercharger?
Rivian adds Snow Mode through software update just in time for winter
Tesla used car market no longer as lucrative, data shows
What to expect at CES 2023, from mondo TVs to EVs
Kia EV6 GT first-drive review: putting a little more fun into EVs
How to charge your electric car at home
2023 Tesla Roadster: release date, specs, rumors, and news
VW previews its next electric car in trippy camouflaged form
Chrysler Synthesis demonstrator brings more screens and software to vehicle cockpits