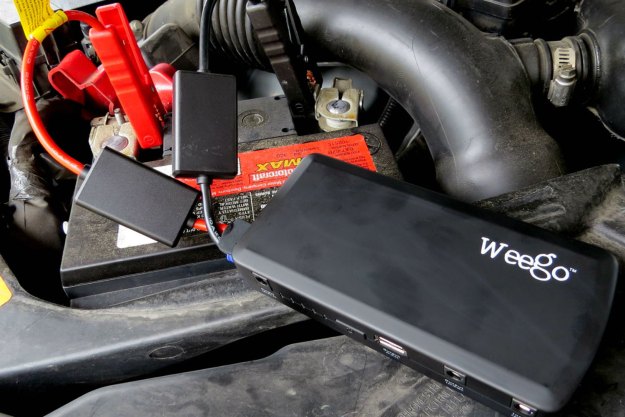 “Weego’s Heavy Duty Jump Starter will bring your laptop, phone or even car back from the dead.”

Whether faced with a roadside emergency or simply a dying electronic device, you no longer have to go without backup power, thanks to Weego’s latest gadget. The Weego brand was launched in 2014 specifically to build and innovate in the field of portable batteries and jump starters for every type of vehicle on the market. We tested out their latest Heavy Duty Jump Starter and OBDII Memory Saver technology to see if they have enough to stand out from the crowd.

Out of the box you will find the surprisingly compact battery packed with a basic battery charger, jumper cables, and chargers for both a home and 12 volt plug. In addition to the basic pieces, you will find additional accessories to help you connect to your devices.

There is a three-way split charging cable that allows you to connect and charge your Micro USB smartphone, newer lightning cable iPhone, or older 30-pin iPhone. The package also includes a set of eight different connectors to plug and charge nearly any laptop – as long as it’s not a MacBook.

The main portable battery is 12,000 mAh on this Heavy Duty model – which should jump gas vehicles up to 6.4L and diesel motors up to 3.2L. You can step even step up to a larger 18,000 mAh Professional package if you need to jump diesel engines up to 4.8L. The vehicle we tested on was a 2.5L 4-cylinder hybrid from a Lincoln MKZ and there were no issues jumping the depleted battery and starting the car.

As with many modern jumper battery packs, the Weego is also equipped with an LED flashlight.

Connecting the jump starting cable attachment is simple, but unfortunately there are no LED indicator lights on the cables to let you know once it is properly connected, which a similar system from Anker does. After the Weego is connected, it is as simple as starting the car and driving away from what would normally be an expensive call to a roadside service company.

As with many modern jumper battery packs, the Weego is also equipped with an LED flashlight. The Flashlight can be toggled from a steady beam, to an SOS flash, and a steady strobing flash. This feature can come in handy for various camping trips, late night rummaging through the car, or to help get some attention for any roadside emergencies in low-light.

At just about six inches long and three inches wide, the Weego battery unit is perfect to throw in a backpack or even your pocket to keep your devices powered while on the move. The Weego casing is a soft black rubber material that is very resistant to the wear and tear of any event or outdoor activity where you may need to stay charged up. At a recent all-day event, we were able to keep a laptop and a Nexus 6 charged all day with power to spare.

The Weego Battery has both a 12V and a 19V output and you should check the power settings on your laptop to determine which is preferred. Charging your devices with the included USB three-way splitter allows for up to two phones or tablets to power up at the same time. Charging power levels remained steady at around 1.5A while multiple phones were charging. Even though the Weego battery is a rather large, at 12,000 mAh it can be charged to full in just about 3 hours. A 12V car charger is also included with the regular wall charger so you can power up at home or on the road.

In addition to the core battery pack business, Weego has innovated several accessories to extend the capabilities of their product. We were able to test their OBD II 12V Memory Saver with our Jump Starter battery. This attachment is perfect for anyone who regularly works in the garage and must unplug the battery to work on their vehicle. One end of the cable goes into the OBD II port on your vehicle and the other plugs into the Weego Battery pack. Once turned on, the Weego will power the car’s computer just enough to save all the radio presets and seating position settings when the car battery is unplugged. On our Lincoln MKZ, the system was able to keep our personalized vehicle settings with the car’s battery disconnected for several hours.

In a market where everyone is jumping in to create their own battery jump starter pack, it is refreshing to see a company primarily focused on the task of keeping you on the road. Weego may have what it takes to stand out as well with innovative attachments for its device like the OBD II 12V Memory Saver and even a 12V socket adapter. At around $116 the Weego Heavy Duty Jump Starter Battery is priced near the high-end of the market, but with the manufacturer’s growing reputation in quality, along with just how useful it is, we’d easily trust the Heavy Duty Jump Starter for all our charging needs.