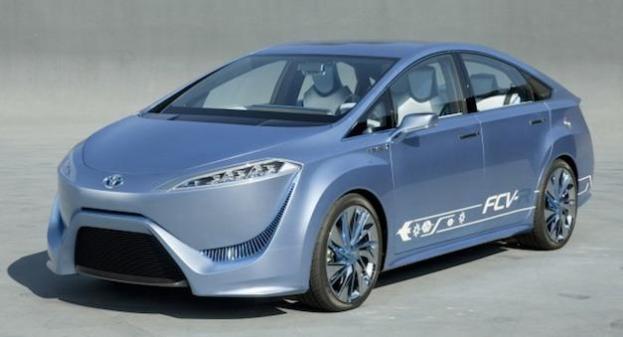 Toyota said the cost for its new fuel-cell car could carry a price tag that puts it more in-line with a premium luxury car.

Even at $75,000, Toyota’s fuel cell car would be more expensive than a vehicle like the Tesla Model S that has a bit more brand cache now when it comes to premium “green vehicles.”

That said, if the cost of the FCV-R does inch toward $100,000, it still won’t be anywhere close to the whopping $1 million that Hostetter says it cost for one of the Toyota fuel cell prototypes.

According to Automotive News, Toyota currently has a fleet of 100 fuel cell beta-prototypes based on the Highlander crossover that have a “real-world-range” of 440 miles. The 2015 FCV-R model, which will be shown at the 2013 Tokyo auto show, is expected to have a design and size that is more Prius-like.

However, potential sales for fuel cell vehicles are still very limited in the U.S. due to the lack of usable structures to support hydrogen refueling, notes the Automotive News report. Currently, the FCV-R Fuel-Cell Car can only be sold in California and New York when it goes on sale in 2015.

That could present some unique challenges for Toyota coupled with Hostetter saying the carmaker expects to sell as many fuel cell cars in 2015 as the number of Prius units sold in its first year, which was 11,000 nationwide, according to the Automotive News report.

Still, I think the most pressing issue for Toyota is figuring out how much people would be willing to pay for the fuel-cell technology under its nameplate.