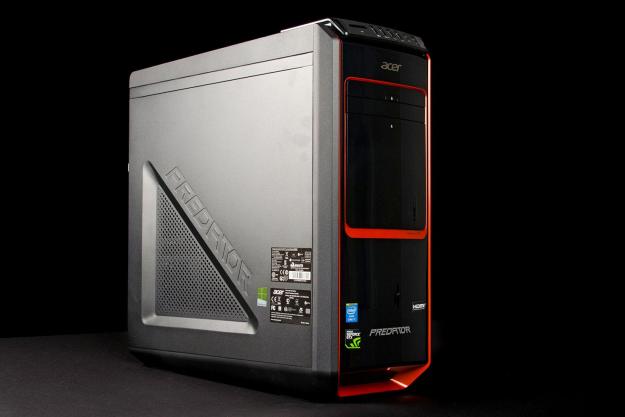 “The Predator G3 finally gives gamers a reason to buy an Acer gaming desktop. Though not outstanding in any one area, well-rounded performance and a price of $1,350 make this rig a great value.”

Though still not a brand often associated with gaming, Acer has come a long way since the introduction of its first Predator gaming desktop in 2010. Early models of the Predator had a hard time offering value compared to the best from Alienware and various boutique OEMs, but the Predator line has slowly become more powerful and better equipped as time goes on. Now, with the introduction of Haswell, Acer appears set to mount a legitimate assault against gaming’s most experienced veterans.

Conservative design isn’t bad if it leads to functionality, however, and that’s where the G3 excels.

The weapon of choice is Acer’s new Predator G3, more precisely known as the AG3-605-UR20. This system equips an impressive array of hardware, including an Intel Core i7-4770 processor, an Nvidia GTX 660 graphics card, and an outlandish 32GB of RAM. These specifications, though far from the most exotic we’ve seen, are enough to let the G3 handle most any game at 1080p and maximum detail. Yet the price is only $1,350, a far cry from the $2,000 or more gamers expect to pay for even a mid-range rig.

Of course, this all might be too good to be true. Acer’s Achilles’ heel is usually in the details, and so-so build quality or design flaws have damaged many of the company’s products. Is the new Predator G3 really enough to tear gamers away from dominant names in the industry?

Early Predators were exercises in the absurd: a strange mash up of shapes and lines trying too hard to grab attention. The Predator G7, a now discontinued super high-end system with a scarab-like “armored face shield,” exemplified this. These antics did little to help Acer become a legitimate gaming brand, so the company has gradually become more conservative with every new generation. The G3 is perhaps the least exciting yet. It’s a simple, glossy black box with a few orange stripes tacked on for flair.

Conservative design isn’t bad if it leads to functionality, however, and that’s where the G3 excels. A large bank of ports, located on the front upper lip of the case, provides four USB ports (two 2.0, two 3.0) along with headphone/microphone jacks and a card reader. The power button is centrally located just past the ports, and the rest of the system’s top is simple, ridged plastic with a built-in handle that makes the system easy to grab for transport. The G3 is not small or light enough to be a dedicated LAN party rig, but it will do in a pinch.

Around back, users will find four more USB ports, (again, two 2.0, two 3.0) along with HDMI, DVI, and 5.1 channel audio. A Blu-ray player is included, as well. We’d like to see more than two display outputs on a system of this caliber, but connectivity is otherwise adequate for gaming.

While the previous Predator looked rather simple to open, it proved confusing in practice. Thankfully, Acer resolved this problem in the G3. Opening the case requires the removal of just two screws. Once inside, everything is exactly where it should be. There’s plenty of space between components. With the exception of a ventilation attachment that simply flips out of the way, there’s nothing unexpected.

The missing extras mean the G3 will never be more than a mid-range gaming rig, no matter what upgrades are applied.

Upgradability is good for a low-cost gaming rig, as there’s one free drive bay and plenty of room for a larger video card and larger CPU heat sink. Only the optical bays and the motherboard’s RAM slots are completely full, but since Acer ships the system with 32GB of memory and a Blu-ray drive, there’s not a lot of room for improvement in either area.

With all of this said, some competitors do better. Gaming systems from boutique manufacturers like Falcon Northwest and Origin routinely come with several free drive bays, room for additional optical drives, and a second PCI Express slot. The missing extras mean the G3 will never be more than a mid-range gaming rig, no matter what upgrades are applied.

We’ve criticized Acer in the past for bundling gaming rigs with the same keyboard and mouse that ships with everyday consumer computers. This practice hasn’t changed. Though functional enough, both peripherals lack any specific gaming functions, and the mouse is infrared, rather than laser.

Shipping peripherals with a gaming rig like this makes no sense. Serious gamers will have already picked their peripherals, so they usually don’t need any at all. And if Acer is for some reason concerned a new gamer won’t buy the G3 because peripherals are not included, then the company should at least go to the trouble of providing a laser mouse and a keyboard with backlit keys.

Our Predator G3 review unit arrived with a Core i7-4770 processor that offered strong performance in both of our benchmarks. SiSoft Sandra’s Processor Arithmetic test came to a score of 125 GOPs, and the 7-Zip benchmark came to a combined score of 21,633. Though these numbers are not the best we’ve ever seen, they are strong enough to provide great performance in any game today.

Gamers on a budget should absolutely consider the G3.

The same can be said about PCMark 7’s result of 4,689. This is a solid score, but not a great one; competitors like the Dell XPS 8700 Special Edition and Alienware X51 have reached 5,000 or beyond, and even some gaming laptops score better. The main drag on the score is the small solid-state drive. Acer instead offers 3TBs of mechanical storage with a 24GB cache drive.

Nvidia’s GTX 660 powered the G3 to a 3DMark Cloud Gate score of 17,941 and a Fire Strike score of 3,971. These numbers are about equivalent to the XPS 8700 SE but are far below the Alienware X51, Falcon Northwest Fragbox, and even the Digital Storm Bolt.

Despite this, we recorded good results from the system during our game benchmarks. Skyrim ran at its V-Sync cap of 60 FPS with Ultra detail, Deus Ex: Human Revolution managed an average of 82 FPS at maximum detail, and Civilization V turned in an average of 54 FPS during our very strenuous late-game, max-detail, strategic-view run. All of these tests were performed at 1080p resolution.

Clearly, the G3 has no problem handling modern games in spite of its somewhat low synthetic benchmark scores. Competitors can generate bigger numbers, but they cost more, and it’s arguable that such extreme performance is overkill for the average gamer.

Our decibel meter reported that the Predator G3 puts out a noticeable, but far from excessive, 42 decibels at idle. We were surprised to find that processor and game tests barely budged the figure; the tower emitted just 43.4 dB during a graphics stress test. Overall, this is one of the quietest gaming desktops we’ve reviewed, yet we saw no sign of this negatively impacting internal temperature.

Power tests showed the G3 consuming 42 watts at idle, 103 watts at full processor load, and 166 watts while gaming. These figures are low for a gaming desktop; most of the ones we’ve tested consume over 200 watts at load.

While the Predator G3 is far from the fiercest gaming PC on the market, its affordable price of $1,350 can be used to excuse its merely adequate performance. The key question, then, is whether Acer’s alternative provides a better value than the competition.

The answer, for perhaps the first time in the Predator’s history, is yes. The only companies that can match this rig’s bang-for-the-buck are extreme value brands like CyberPower, but they remain the victim of a confusing order process that mystifies more buyers than it helps. Compared to Alienware, Falcon Northwest, or Origin, Acer has an edge of between $50 and $300 dollars. Even the Dell XPS 8700 Special Edition, which lagged slightly in our gaming tests, costs more.

Acer has finally delivered a gaming desktop with an advantage over the market’s veterans. While a sense of awe or occasion might be missing from this bare-bones rig, it’s hard to argue with a legitimately capable gaming desktop that is sold for less than $1,500 and offers respectable upgradability. Acer’s Predator G3 offers outstanding bang-for-the-buck. Gamers on a budget should absolutely consider the G3.