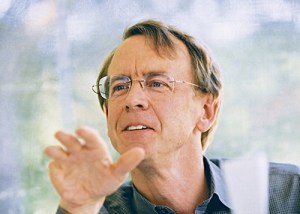 If enough people think something is worth billions of dollars, does that make it so? The latest valuation of Twitter indicates the company is a lot more valuable than previously thought. Thanks to a bidding war between multiple investors, the value of Twitter has risen from $3 billion to $4 billion in a matter of weeks, reports TechCrunch.

The raise in price is due to competitive bidding between Russian firm DST and John Doerr’s firm, which has a name long enough that it should be featured in Mad Men: Kleiner Perkins Cauflied & Byers. Doerr (pictured right) is a big investor in a lot of Internet giants like Amazon and Google and regrets passing up Twitter some time ago. DST also owns 10 percent of Facebook.

And so the two warring investors have driven up the price of Twitter, which is now close to $4 billion. One insider on the negotiations said that “Doerr wants to own part of Twitter, And Doerr generally gets what he wants.” Doerr has invested millions in social media and Apple-centric companies lately. In October, he partnered with a number of companies to launch the sFund, which seeks to fund social entrepreneurs.

No deal has been finalized and, for all we know, another investor could swoop in and raise Twitter’s value to $5 billion, or maybe $10 billion. If people are charged up and ready to pay, does it really matter what Twitter is actually worth?

Topics
Twitter apologizes for personal data misuse with timeline alert
Elon Musk threatens to abandon Twitter acquisition over spam bot data
Goodbye TweetDeck for Mac, you were too pure for this world
Twitter accused of selling your phone number to advertisers
Best Buy is having a 1-day sale on the Microsoft Surface Laptop 5
Apple’s VR headset may launch soon, intriguing leak suggests
The most innovative monitors of 2022
The most innovative tech products of 2022
Why I refuse to buy The Callisto Protocol on PC, even with an RTX 4090
Nvidia and AMD GPU prices could skyrocket again in 2023. Here’s why
How to safely overclock your Intel or AMD CPU
ChatGPT: how to use this viral, often hilarious AI chatbot
What does the lock mean on Snapchat?