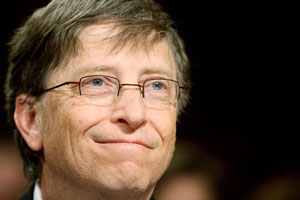 Bill Gates could have been the wealthiest person in the world, reports Reuters. But he gave it all away. In fact, the Microsoft founder has given away so much of his fortune in the last year that it pushed him down to lowly number two on Forbes‘ upcoming list of 2011 billionaires, just behind Mexican tycoon Carlos Slim Helu.

Had he not given so much to charity — primarily through the Bill and Melinda Gates Foundation — Gates would be worth an estimated $88 billion — miles above the competition. Because of his massive philanthropic efforts, however, Gates is now worth $49 billion. This puts him well behind Slim, who has an estimated $60 billion. Warren Buffet, also a major philanthropist and regular in the top-three richest, is now worth $47 billion.

According to last year’s Forbes list, Gates was worth an estimated $53 billion, not far behind Carlos Slim’s $53.3 billion fortune. That marked only the second time since 1995 that Gates did not sit in the top spot — a place it seems unlikely he will inhabit ever again if he continues along this charitable path.

Gates and his wife Melinda have so far given an estimated $28 billion to their foundation, the largest such organization in the world, which focuses its efforts on increasing the availability of health-care and reducing extreme poverty around the world. In the US, the foundation puts forth most of its resources towards improving education.

Last year, Buffet and Gates launched the Giving Pledge, which challenged the wealthiest people in the US to give away at least 50 percent of their fortunes within their lifetimes. So far, a total of 59 billionaires have signed the Pledge. That includes Facebook co-founders Mark Zuckerberg and Dustin Moskovitz, both of whom joined last December.

Forbes‘ complete list of this year’s richest will be available on newsstands, and online, Wednesday.

Bill Gates says he won’t be returning to Microsoft