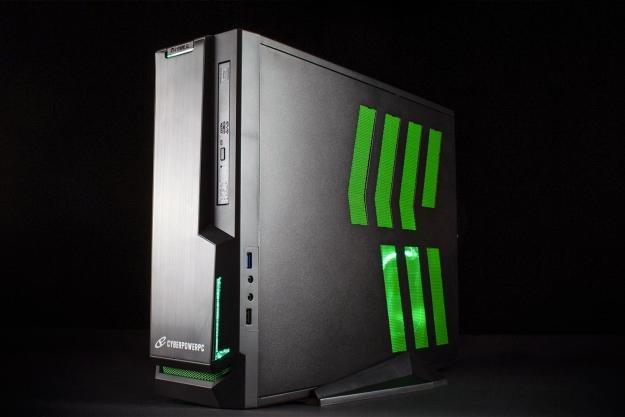 Speak the name “Cyberpower” among PC geeks and you’re unlikely to receive mixed responses. Some swear that they’re among the very best, providing more options and lower prices than their competitors. Others believe that they’re computing equivalent an econo-car; they get the job done, but you get what you pay for.

We’ve yet to have the chance to make a decision here at Digital Trends, as a Cyberpower computer has never found its way to our doorstep – until now. The Zeus Mini review unit we received is clearly built to compete with other small computers like the Falcon Northwest Tiki and Digital Storm Bolt, and the spec sheet suggests Cyberpower’s entry could hold its own with either. After all, the Zeus Mini is packed with an elite Intel Core i7-4770K CPU, is paired with a super-clocked Nvidia GTX 780, a 120GB Samsung EVO SSD coupled with a 2TB mechanical hard drive, and 8GB of RAM.

That’s some impressive hardware, yet the price adds up to about $1,700, which is far less than what most high-end gaming systems we review demand. Is the Zeus Mini an excellent bargain, or a case of “too good to be true”?

Our Zeus Mini’s case wears green accents that light up like a radioactive super-villain, which do provide some visual spice, but are a bit brighter than we’d like and are distracting in a dark room. This issue is amplified by the fact the only front-facing ports found on the Zeus Mini (two USB alongside headphone and microphone jacks) are located on the left side. In other words, you must position the PC with the LEDs facing towards you, or reach around the system’s edge whenever you want to use the front-mounted connections.

This is inconvenient, but it’s also the system’s only functional sin. The Zeus Mini is otherwise a long, thin desktop with no remarkable features yet no noticeable flaws. Build quality, while not up to the standards of the Falcon Northwest Tiki, is on par with the Digital Storm Bolt, but lacks the huge panel gaps that made the original Bolt look amateurish.

The rear panel is home to four USB 3.0 ports, two DVI, HDMI, DisplayPort, Ethernet and a single OS/2 port for legacy mice or keyboards. This selection is slim compared to the Tiki and Bolt, both of which offered four USB 3.0 and four USB 2.0 when we reviewed them. We were also frustrated by the front headphone and microphone jacks which lack any label or color, forcing us to guess which was which.

Opening this system is easy thanks to side panels that are held shut with only a single thumb screw. Once open though, you won’t find much wiggle room for upgrades. The extraordinarily slim Zeus Mini is cramped, even for its size, stymied by a packed interior that provides immediate access to absolutely nothing. Even the RAM slots are hidden behind a fan as well as the cooling tubes connecting the water-cooled CPU to its radiator.

The Zeus Mini is mediocre everywhere except where it counts; performance.

Tinkering with components in the Zeus Mini is no small task, thanks to structural reinforcements that strengthen the case but also span the interior and obstruct its internals. These must be put aside to access the interior, a process that requires the removal of no fewer than six screws and, if you want to replace or repair multiple components, up to 18. There’s also no space to add more RAM or hard drives, so you’ll have to replace what’s already installed if you want to upgrade. And that’s only the beginning.

Once the reinforcements are removed, there are a number of difficulties to deal with. The video card is attached via a riser. The power supply’s cables are very carefully routed and difficult to restore to their original positions once moved. And the processor can’t be replaced without removing the motherboard. Many PCs contain a few challenges for do-it-yourselfers, but the Zeus Mini contains a maze of problems that will frustrate even the most experienced do-it-yourself gurus.

Our review unit’s Intel Core i7-4770K processor is among the most powerful CyberPower offers with the Zeus Mini, and it predictably destroyed our benchmarks. In SiSoft Sandra’s Processor Arithmetic benchmark, it scored 125 GOPS, while the 7-Zip compression benchmark reached a score of 22,371 MIPS. These numbers are not the quickest we’ve ever seen though; the Digital Storm Bolt scored 24,788 and the Falcon Northwest Tiki scored 26,554. Despite falling to its competitors in this area, the Zeus’ processor does the job.

PCMark8’s storage benchmark reached a score of 4,991 when tested with the 120GB SSD. This is about what we expected (virtually al SSDs score between 4,500 and 5,000), and the drive proved its worth by providing swift load times in games. The limited storage space could be an issue, however, as Battlefield 4 took up over a quarter of the drive’s available space by itself. A 2GB mechanical drive provides backup here, but also can’t load games as quickly.

Our synthetic 3D benchmark, 3DMark, reached a score of 23,767 in the Cloud Gate test and 8,780 in the Fire Strike test. These numbers essentially tie the last Falcon Northwest Fragbox we reviewed, which was powered by a regularly clocked Nvidia GTX 780 (the one in the Zeus is overclocked) and reached scores of 26,301 and 8,342, respectively. The Zeus absolutely destroys other low-cost systems like the Acer Predator G3, which only managed 17,941 and 3,971 respectively.

We tested the Zeus Mini using three games; Total War: Rome 2, Battlefield 4 and League of Legends. All games were benchmarked at 1920×1200 resolution. Here’s how each performed.

At medium detail, Rome 2 managed an average of 69 FPS with a minimum of 42 and maximum of 90. Strangely, bumping up to extreme detail only shaved this down to 58 FPS, again with a minimum of 42, but this time with a maximum of 81. This is excellent performance in what’s known as an incredibly demanding strategy game.

Did we mention that it’s screaming fast?

Packing so much power into a small form-factor PC has an obvious downside; noise. There’s a lot of heat generated, and not many fans or space to dissipate it, so what’s available must work overtime.

Ultimately, the Zeus Mini is both a great value and an also-ran.

Even at idle, we recorded a very noticeable 45.5 decibels, and that figure rose to a banshee-like 51.8dB at load. The Digital Storm Bolt was equally loud when we reviewed it, but Falcon Northwest’s Tiki is quieter than some full-sized gaming towers and a paragon of silence compared to the Zeus Mini.

We also noticed the sound emanating from the Zeus Mini could be harsh. Some rattles were noticeable at full load and a sharp squeal often emanated from the system when playing games. These issues are sure to annoy users with even the slightest disdain for noisy rigs.

Our watt-meter recorded 61 watts of power consumption when idle, a figure that puts the Zeus Mini above the Acer Predator G3, which consumed 43 watts, and the Digital Storm Bolt, which required 51 watts. However, 61 watts remains a respectable figure for a powerful gaming desktop.

At load, this number soared to 346 watts, but only with the GPU engaged; loading the processor increased consumption to only 101 watts. This load figure is nearly double the Acer Predator G3’s consumption of 166 watts, but that’s to be expected because the Zeus Mini is twice as fast. The Falcon Northwest Fragbox consumed 330 watts under similar conditions, and the Digital Storm Bolt needed 339 watts to operate.

Cyberpower’s Zeus Mini is a melting pot of pros and cons, which makes it that much more difficult were deciding what our final verdict on this system would be. There’s no denying that the price-to-performance ratio served here is outstanding, as an equivalent Falcon Northwest Tiki is over $1,000 more, and a Digital Storm Bolt II will dig an extra $900 out of your wallet. Yet Cyberpower’s mini-PC is also undeniably flawed in important areas like upgradability and noise, which means that we can’t recommend it to everyone.

This question, then, must be directed at you; what’s your tolerance for imperfection? If you don’t mind a few rattles, and don’t care about the obtuse enclosure, then this PC’s value is hard to ignore. More discerning buyers, however, will despise the Zeus Mini’s submission to mediocrity.

Ultimately, the Zeus Mini is both a great value and an also-ran. The attention to detail and refinement delivered by the best PC makers is nowhere to be found here, yet CyberPower offers similar hardware for up to a grand less than the competition.