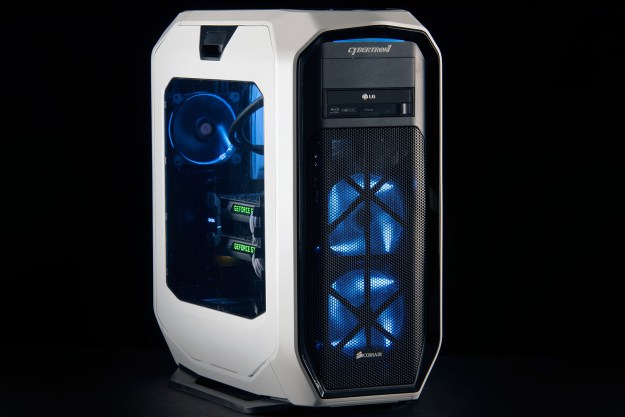 “Like raw plutonium, the Thallium is extremely powerful but hardly refined.”

We pitted this system against four other Skylake desktops. For the full scoop, including processor and gaming benchmarks, check out our comparison.

It wasn’t long ago that most enthusiast PC builders were using off-the-shelf enclosures to build their fantastically powerful — and expensive — rigs. That’s slowly changed, however, with the introduction of custom cases by companies like Falcon Northwest and Origin PC. CybertronPC, which uses off-the-shelf enclosures built by other companies, is at a disadvantage from the start.

That’s not to say the Corsair Graphite 780T used to build our Thallium review rig is a bad case. It’s large, spacious, simple to open, and attractive. But it also lacks refinements I’ve come to expect. The case panels and fan guards, for example, are too easy to open – they pop away with the slightest tug. If you’re building your own rig at home, that can be handy. But it’s disconcerting when the rig you’ve paid $4,000 for sheds its front fan guard the moment it’s unboxed.

Fan noise was also an issue, and again, the case is the likely culprit. The Corsair is designed for very high air flow, but that also means there’s little separating the user from the fans. We recorded relatively high noise as a result. At full load the Thallium put out 46.2 decibels, compared to 39.6 from the Origin Millennium. That’s a big gap.

While the Thallium’s build quality leaves a bit to be desired, its performance doesn’t. The unit we received came with an overclocked Intel Core i7-6700K and two GTX 980 Ti graphics cards, along with 16GB of memory. In our comparison against other Skylake systems it consistently performed well, especially in game performance, where it usually led by a few frames per second.

And, because CybertronPC uses off-the-shelf components, there’s significant degree for customization – even more so than other boutique custom PC builders. You could end up with a Thallium that’s drastically different from the one we tested, with an entirely different enclosure.

Ultimately, I think most users will be better off with a somewhat less configurable, but more finely tuned, computer. The Origin Millennium is the standout in this area, but the Falcon Northwest Talon is also great if you want a smaller rig. The Thallium is a performer, but it can’t match the precision quality of the competition.