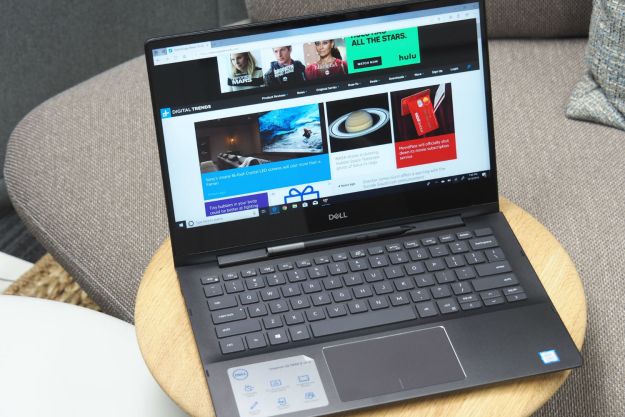 “The Inspiron 13 Black Edition is a great option for anyone without the extra cash to burn on an XPS.”

Editor’s Note: The Dell Inspiron 13 7000 2-in-1 Black Edition has been updated with a model that includes 10th-gen processors and Thunderbolt 3 support, starting at $1,400. The model we reviewed is still available for purchase, starting at $1,200.

Dell’s XPS line is great, but it’s not all that affordable. Don’t worry, though — Dell has another solution for you: the Inspiron 13 7000 2-in-1 Black Edition. It’s almost $700 less expensive than the new XPS 13 2-in-1 in a similar configuration.

Of course, money is only one factor when buying a laptop. There’s also performance, build quality, battery life, and much more to consider. Does the Inspiron 13 7000 2-in-1 Black Edition (from now on, just the Inspiron 13 Black Edition) offer a more affordable alternative to the XPS 13 2-in-1 that won’t disappoint?

To answer that question, I took a look at the high-end configuration of the Inspiron 13 Black Edition that prices out at $1,371 with a 4K screen, Core i7 processor, 16GB of RAM, and a 512GB PCIe solid-state drive (SSD). As mentioned above, that’s is a significant saving off of the new XPS 13 2-in-1 but right in line with other premium 2-in-1s. Should it be your next laptop?

Not your father’s Inspiron

It’s right up there with the best laptops in terms of its rigidity, with a lid that resists bending and a bottom chassis that feels solid. Only the keyboard deck shows some flexing, and it’s minor. I haven’t had a chance to directly compare the new XPS 13 2-in-1, but I can’t imagine it feels $700 more durable than the Inspiron 13 Black Edition.

Of course, this laptop is much like the Ford Model T — it comes in any color you like, as long as it’s black. That makes perfect sense given the Black Edition designation, and I find the aesthetic to be attractive enough. Its lines resemble many recent laptops, with slightly forward-sweeping angles that remind me of the much more expensive and business-oriented Dell Latitude 7400 2-in-1.

There’s almost zero bling, though. Just a matte black color scheme with only the touchpad’s chamfered chrome edges offering any shiny bits. This isn’t a laptop that’s meant to stand out, and joins other 2-in-1s like the Lenovo Yoga C930 in contrast with the overstated elegance of HP’s Spectre x360 13.

This isn’t the smallest 2-in-1 you’ll find nor is it the thinnest.

Dell didn’t get the Inspiron 13 Black Edition the same kind of bezel treatment as its XPS lineup — the side bezels are thin, but the top is a little thicker and there’s a significant chin beneath the display. Thus, this isn’t the smallest 2-in-1 you’ll find nor is it the thinnest at 0.63 inches or lightest at 3.08 pounds.

That compares to the new XPS 13 2-in-1 that sports some seriously tiny bezels, comes in at 0.51 inches, and weighs slightly less at 2.9 pounds. The Inspiron 13 Black Edition compares nicely, though, to the HP Spectre x360 13 which has even larger bezels and a slightly larger chassis. The HP is thinner though at 0.57 inches, and it weighs in at 2.92 pounds.

Connectivity is good for a thin-and-light 2-in-1 today, with a USB-C 3.1 Gen 1 port, a USB-A 3.1 Gen 1 port, a full-size HDMI 2.0 port, and a microSD card adapter. One thing you’ll get with an XPS laptop and not an Inspiron is Thunderbolt 3 support, so keep that in mind if you need to connect to an external GPU or want to run a bunch of external 4K displays.

The Inspiron 13 Black Edition sports a very nice keyboard. It has plenty of travel and nice spacing, with a mechanism that’s quiet and springy. I was up to my usual 90 words a minute or so in no time on this keyboard, and it ranks up there with some of my favorites. I still slightly prefer the HP Spectre x360’s keyboard, but the difference isn’t profound.

Note that the XPS 13 2-in-1 now comes with an updated version of the magnetic levitation (maglev) keyboard that Dell first introduced in its XPS 15 2-in-1. That means it’s quite shallow, which is likely to evoke a love it or hate it response. I like to have some travel in my keyboards, and so I’m unlikely to be a fan of the maglev keyboard on the XPS.

You’ll also likely enjoy the moderately sized touchpad on the Inspiron 13 Black Edition. There’s room for a slightly larger version, but I had no problem using the full range of Windows 10’s multitouch gestures — that’s thanks to Microsoft’s Precision touchpad drivers, which are pretty much a standard today.

The pen is stored in the hinge beneath the display, which is an innovative touch.

This is a 2-in-1, and so, of course, the display supports both touch and the Dell active pen. The display was responsive and precise for both, and if you’re a fan of using your 2-in-1 in tablet mode for taking notes, then you’ll find this to be a good (if slightly heavy) option.

The pen is stored in the hinge beneath the display, which is an innovative touch. Powerful magnets suck the pen into place when it gets close enough and automatically orient the pen buttons to face inward. It’s a great solution that ensures you’ll always have your pen handy, and unlike Lenovo’s various slide-in pens, this one is a full-size version that feels more natural when inking.

Peppy enough for any productivity user

The Inspiron 13 Black Edition comes with just the quad-core 8th-gen Whiskey Lake Core i7 as its only CPU option. Overall, I found it to be quite competitive with similarly equipped laptops, but of course, Intel’s 10th-gen CPUs are showing up in laptops and will likely bring a significant speed increase. That sets the Inspiron a bit behind in the long run.

Its Geekbench 4 scores are right where we like to see them for this processor — above 5,000 (5266, to be precise) in the single-core test and above 15,000 (16,326) in the multi-core test. These aren’t the fastest speeds we’ve recorded, but they promise solid productivity performance.

Looking at our more real-life test that uses Handbrake to encode a 420MB video to H.265, the Inspiron 13 Black Edition was a bit more average. It took just over five minutes to complete the encoding process, which is faster than the HP Spectre x360 13’s 298 seconds but falls behind speedier options like the Asus ZenBook 14 UX433 that finished a minute faster.

Performance in this test is an indication of whether a laptop is a good option for demanding apps like video editing, where the Inspiron 13 Black Edition won’t be the best platform.

As I indicated in the introduction, Dell equipped my review configuration with a PCIe SSD backed by 32GB of Intel Optane cache. That made it very speedy whenever it was reading data that had already been accessed by the system and stored in the cache, but average when accessing fresh data.

The newest XPS 13 2-in-1 uses Intel’s 10th-gen Ice Lake CPUs, meaning it will be faster and more efficient.

Overall, there’s some benefit to Dell’s choice to utilize Optane in the Inspiron 13 Black Edition, and I never found myself waiting for the 2-in-1 to open apps or save data.

Since the Inspiron 13 Black Edition is aimed squarely at those who might otherwise prefer an XPS model but want to save some cash, I’ll note that the newest XPS 13 2-in-1 uses Intel’s 10th-gen Ice Lake CPUs, meaning it will be faster and more efficient. And Dell will likely introduce a version of the Inspiron 13 Black Edition with the same CPU at some point, meaning that you are buying into a previous generation of performance if you opt for this version.

We ran our usual gaming benchmarks on the Inspiron 13 Black Edition and got the expected results given the integrated Intel UHD 620 graphics. In short, don’t buy this laptop if you’re looking for mobile gaming.

Pixel peepers will love the display

The Inspiron 13 Black Edition equips a 13.3-inch IPS 4K display in the typical 16:9 aspect ratio, which will appeal to anyone who doesn’t want to see pixelated text and enjoy high resolution video. That’s an attractive feature, although some people might prefer the XPS 13 2-in-1’s 13.4-inch display in the more productivity-friendly 16:10 aspect ratio.

In practice, you’ll enjoy watching Netflix in 4K, especially given the Dolby Vision high dynamic range (HDR), and if you love sharp black text that stands out on a white background, then you’ll appreciate the display’s performance.

If you’re a creative type looking for tons of accurate colors, then you’ll want to look elsewhere. That includes the XPS 13 2-in-1 which has a much brighter display with wider colors and significantly higher contrast. Again, its display is one of the things that justifies the XPS 13 2-in-1’s higher price tag.

In my testing, the Inspiron 13 Black Edition was a solid performer for a powerful laptop with a 4K display. It managed almost eight hours in our web browsing test, which is probably the best indication of the laptop’s longevity for the average productivity user. In the more aggressive Basemark web benchmark test, the Inspiron 13 Black Edition managed three and a quarter hours, which is a good score for a Core i7.

The Inspiron 13 Black Edition is likely to get you through most of a working day away from a charger.

And finally, in our video test that loops a 1080p trailer until the battery runs out, the 2-in-1 lasted for just over 10 hours — shorter than we like to see, but again, you’ll enjoy those 10 hours on this display.

Obviously, there’s the new XPS 13 2-in-1 to consider. You’re unlikely to get the same battery life, and you’ll be spending more money. But, you’ll get a more modern and innovative 2-in-1 that’s likely to be faster.

The HP Spectre x360 13 is a similarly priced alternative. It’s better looking, equally well built, and offers more options including a low-power Full HD display that will keep you going well into the evening after a long day at work.

The only thing missing on the Inspiron 13 Black Edition in terms of its lifespan is Thunderbolt 3. The CPU is last-gen but still fast enough to last for years, and the 2-in-1’s build quality gives confidence. The 1-year warranty, though an industry standard, is nevertheless disappointing, as usual.

Yes. The Inspiron 13 Black Edition is an excellent take on the modern 2-in-1.