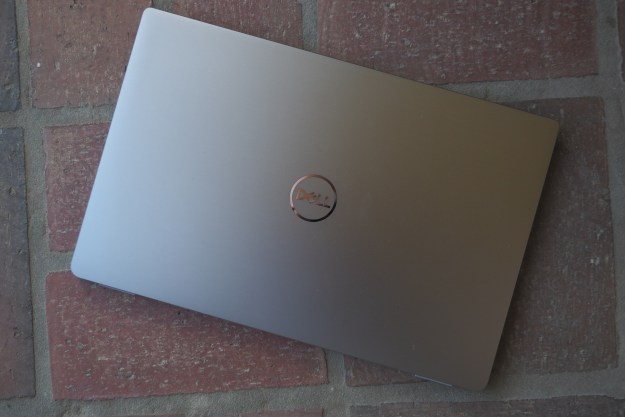 “The Dell Latitude 7410 Chromebook Enterprise is aimed at businesses that need to manage their laptops precisely and carefully, and are willing to pay for it.”

That’s a tremendously expensive Chromebook, and I have to wonder what justifies the high price. The answer? Dell is aiming this laptop at large companies that need to manage their laptops — including their Chromebooks — with a level of control that the average consumer would never consider.

Does the Latitude 7410 Chromebook Enterprise offer the right value for its corporate customers?

Dell touts the Latitude 7410 Chromebook’s durability. It touts a host of military-spec certifications as one of its selling points. For the most part, the laptop lives up to its billing. The lid is sturdy, with zero bending, the bottom of the all-aluminum chassis resists pressure, and there’s only the slightest bit of keyboard flex.

My review unit with the 4K display and extra battery (more on that later) came in at 0.66 inches thick, slightly thinner than the Acer Chromebook 13 (another powerful Chromebook) at 0.67 inches. The Dell weighs in at 3.36 pounds for the aluminum version, which is a bit much for a 14-inch laptop, but then the Acer Chromebook 13 almost matches it exactly at 3.5 pounds. You’ll need to look at something like the 13.3-inch Google Pixelbook Go (0.5 inches and 2.3 pounds) if you want a thin, light Chromebook.

It’s a nondescript laptop with a dark silver or gray chassis — and a complete lack of flourish. The display bezels aren’t huge on the sides, but are rather chunky up top and below. It’s not going to attract attention in a boardroom or coffee shop.

Connectivity is strong for a Chromebook. On the left-hand side, you get two USB-C ports that support power and display, to go with a full-size HDMI port and a microSD card reader. On the right-hand side, you’ll find two USB-A 3.2 ports, a Kensington lock slot, and a 3.5mm audio jack. Wi-Fi 6 and Bluetooth 5.1 provide wireless connectivity, along with an optional Intel XMM 7360 Global LTE-Advance chip (that wasn’t on my review unit). You won’t find many Chromebooks with this level of connectivity, so that’s a checked box in Dell’s favor.

My review unit was equipped with the 10th-gen quad-core Intel Core i5-10310U Comet Lake CPU, which is a very fast processor for Chrome OS. The only usual benchmark we can run from our suite (due to OS compatibility issues) is Geekbench 5. There, the Latitude 7410 Chromebook scored 1,025 in the single-core test and 2,712 in the multi-core test using the Android app. Recently, we reviewed the $410 Lenovo Chromebook Flex 5 with a Core i3-10110U that scored 975 and 1,659. So, the Core i5 is definitely speeding things up.

In real-world use, there was little I could do to slow down the Latitude 7410 Chromebook. With 16GB of RAM and a fast PCIe SSD to go with the overkill processor, I could open as many tabs as I wanted with no problems. The same was true when opening a handful of Android apps in the background. If you need a Chromebook that won’t slow you down, then the Latitude 7410 Chromebook will satisfy.

I ran a few games, such as Asphalt 9, and the Chromebook kept up with those as well. There’s no touchscreen, so many games won’t be very much fun to play. But for those that can get by with keyboard control, you’ll enjoy the experience.

Perhaps the most consumer-friendly feature of the Latitude 7410 Chromebook is the optional 4K IPS display, which Dell says is the first with blue light protection to ship on a Chromebook. The display renderd everything razor-sharp, aided by how easy Chrome OS makes it to scale the display to the desired apparent resolution. You can make on-screen items just the right size for you and retain incredible clarity, which I enjoy quite a bit.

I couldn’t subject the display to my colorimeter — again, because our usual test software doesn’t run on ChromeOS — but my eyes told me it was bright, with natural colors and tons of contrast. It was a joy to work on, and video and images looked great.

The 4K display also comes with a large 68 watt-hour battery (versus 52 watt-hours) to account for the extra power drain, though it’s possible to also configure the Full HD model with this larger battery. I would hold this display up to any Chromebook out there, including the excellent displays on the Acer Chromebook 13 and the Google Pixelbook Go.

The audio was average, with sufficient volume for watching YouTube by yourself, and bingeing Netflix in a pinch. Mids and highs weren’t the clearest I’ve heard, and bass was nonexistent, but the sound system suffices for typical use. Plan on some headphones or external speakers if you want to enjoy your tunes or really get into an action film.

The Latitude 7410 Chromebook’s keyboard is the typical island style, with plenty of travel and a relatively stiff key feel. There’s a very distinct bottoming action that lets you know you’ve depressed a key, and unless you prefer a lighter touch, you’ll like this keyboard.

I found the keycaps to be a little small, and the spacing felt cramped. I like the keyboards on the HP Spectre line better, and of course, the MacBook’s new Magic Keyboard is the best around. But the Latitude 7401 Chromebook’s will keep most touch typists running full speed. The keyboard has the usual Chrome OS five levels of brightness, which is always a nice bonus.

The touchpad is of average size, but it’s covered in plastic, not glass. Still, it’s comfortable for swiping and using Chrome OS multitouch gestures. I had no issues with it throughout my testing. The display is non-touch, so you’re relegated to using just the touchpad to keep things under control.

My Latitude 7410 Chromebook review unit packed 68 watt-hours of battery inside. That should be plenty for a Chromebook, but keep the power-hungry 4K display in mind.

In our demanding Basemark web benchmark test, the Latitude 7410 Chromebook lasted for around 3.75 hours, which is an average score given the respectable Intel processor in this laptop. The Acer Chromebook 13, for example, lasted about 20 minutes less.

Our web-browsing test, which runs through a series of busy webpages and best reflects typical productivity, lasted nearly nine hours on the Latitude 7410 Chromebook. Compared to Chromebooks with low-power CPUs and Full HD displays, that would be a poor score, but it’s decent for a machine with a fast processor and a 4K screen. The Acer Chromebook 13 uses a QHD+ (2,256 x 1,504) 3:2 display, and it lasted about 10 minutes less.

Finally, in our video rundown test that loops through a Full HD Avengers trailer, the Latitude 7410 Chromebook went off the rails a bit. It only managed a tad under five and a half hours, which isn’t terribly impressive, even with the 4K screen. The Acer Chromebook 13 lasted almost four hours longer.

Clearly, when Dell talks about the Latitude 7410 Chromebook being the longest-lasting 10th-gen Chromebook, they’re not talking about my review configuration. If you want to guarantee all-day battery life, then you’ll want to opt for the Full HD display, but retain the larger optional battery.

The Latitude 7410 Chromebook justifies its high price because of features aimed squarely at large companies that need to manage their laptops extensively.

The first of these features is Chrome Enterprise, a confusingly named reference to a Chrome OS version that adds in a host of enterprise-oriented controls and plug-ins that enhance security and remote management. These include a managed Google Play Store that allows companies to regulate which apps are installed, the ability to manage the Chrome browser and installed extensions, Microsoft Active Directory integration, single sign-on, and more. There’s also 24/7 enterprise support available that goes above and beyond what the typical consumer will experience.

These features come with a $50 annual fee that’s not included in the price of the laptop. Any company that chooses the Latitude 7410 Chromebook will need to factor that cost into their equations.

Another feature that’s unusual for a Chromebook, and adds some value, is the optional LTE card, mentioned earlier, that enables always-connected internet. That wasn’t included in our review unit, and so you’ll pay even more for the privilege.

Finally, the laptop features a sliding privacy shutter that covers the webcam for extra security. That’s not something you typically see in Chromebooks, although I imagine it won’t be long before it’s a standard feature trending in the Windows 10 world.

None of these features (except maybe the privacy shutter) are of interest to consumers, of course. I went into this review wondering if a very expensive Chromebook had its place, and it does — in large companies.

You’ll really need the enterprise features available with the Dell Latitude 7410 Chromebook Enterprise to justify its purchase price. It’s a well-built, if a bit boring looking, Chromebook with more than enough performance to meet anyone’s Chrome OS needs, and it offers things like a privacy shutter and optional LTE that make it a more private and usable laptop. There’s the extra $50 per year to consider to unlock the Chrome Enterprise features, but if $1,900 is in your budget, then you should have no problem getting approval for the incremental upcharge.

This isn’t anything close to a consumer Chromebook, though. If you’re not a corporate employee making a calculated investment decision, then you’ll want to steer clear.

If you want a fast Chromebook, then the Acer Chromebook 13 is a good choice, even though it’s still using 8th-gen CPUs. It’s also less than half the price and doesn’t come with any enterprise features, so it’s more of a consumer option.

If you do need an enterprise laptop, then you can consider the HP Pro c645 Chromebook Enterprise. It’s not out yet, but it looks like it will provide the same Chrome Enterprise advantages for corporations, and a similarly robust design. If you can’t wait, then the Acer Chromebook Enterprise Flip 13 will provide the same corporate manageability in a 2-in-1 format for $1,300, although you’ll be stuck with an 8th-gen Core i7 CPU. The 3:2 display at 2,256 x 1,504 would be a nice feature to have, though.

The Dell Latitude 7410 Chromebook will keep Chrome OS running for years, and it’s durable enough to last. A three-year on-site/in-home warranty is included in the Chromebook’s price, well beyond the one-year mail-in warranty we’re used to seeing.

If you’re a consumer, no. The price is crazy, and you can get a Chromebook that’s just as fast with the features you’ll need for a fraction of the price. If you’re a large company that needs a robust laptop with great connectivity and Chrome Enterprise on board, then maybe it can fit into your budget.

Topics
Wi-Fi not working? Here’s how to fix the most common problems
Best laptop deals: Save on Apple, Dell, HP and Lenovo
Microsoft Word vs. Google Docs
Apple spring event: massive Mac launch, XR headset, and more
Best Gaming PC Deals: Save on RTX 3070, 3080, 3090 PCs
The 6 biggest problems with ChatGPT right now
Pro users are already unhappy with the upcoming Mac Pro
How to schedule an email in Outlook
15 years later, the MacBook Air could soon have its best year ever
How to watch Super Bowl 2023 on your computer
Turns out DirectStorage isn’t killing frame rates in Forspoken after all
The best Chromebooks for 2023
Best microSD cards in 2023: top picks for your computer, camera, or drone